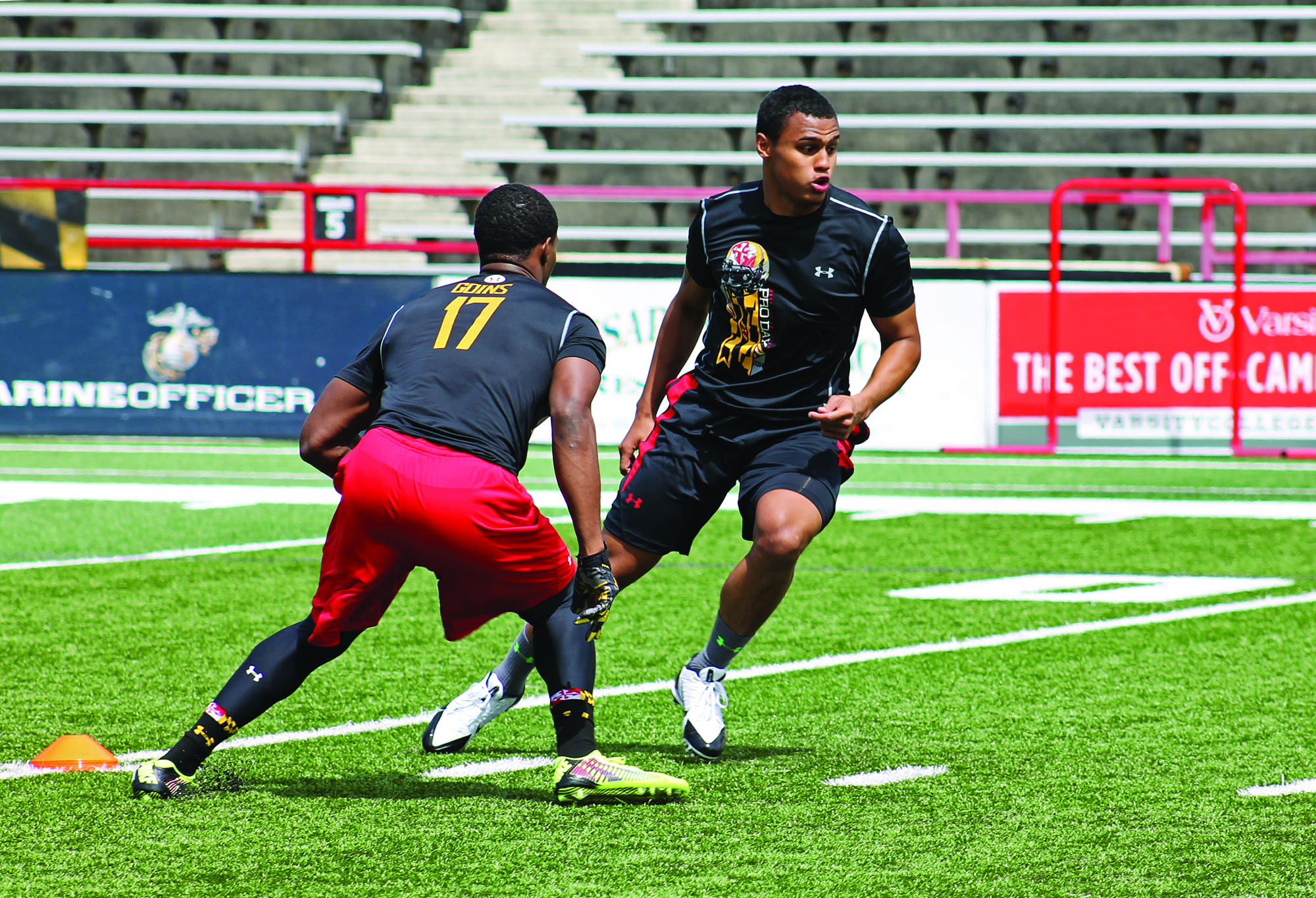 By RJ Kaminski/For The Diamondback

The fans from Falmouth, Virginia, wouldn’t see the royal blue-and-gold No. 9 jersey of future Maryland cornerback Dexter McDougle on the field during the 2005 season. The Stafford Senior High School football coaching staff didn’t have much use for the inexperienced defensive back, but their quarterback did.

Faced with a request from a veteran standout player, McDougle obliged.

“I put one bud in my ear and he had one in his ear,” McDougle said with a smile. “And that’s how we became cool. That’s how we really started getting close.”

As their relationship has blossomed throughout the years, so too have their careers. Both players competed for the Terps — Smith was a two-time All-ACC wide receiver while McDougle was a staple in the defensive backfield — and both now compete in the NFL.

McDougle, who plays for the New York Jets, is younger, so Smith accomplished these feats before he had a chance to. But thanks to sharing his music with a teammate early in high school, McDougle sparked a relationship that would hold true as he endured various hardships throughout his college and NFL career.

“Torrey was pretty much the same way [as Dexter],” said Stafford football coach Roger Pierce, who coached McDougle his freshman year. “Self made, strong character, great leader by what he did on the field. His actions just spoke louder than words, and I think that he was a good role model for Dexter to follow.”

Several Division I schools, including Maryland, South Carolina and Virginia Tech, sought after McDougle’s talents on both sides of the ball. Rivals ranked him as the 76th-best athlete in the nation. He earned All-District and All-Area honors, in addition to Honorable Mention All-Met from The Washington Post.

McDougle took an official visit with the Terps in 2008. Having friends who endured the recruitment process before him, McDougle knew not to fall for everything those said to him. Still, he trusted Smith.

“A lot of times you hear the same things over and over with coaches and whatnot,” McDougle said. “But I knew he wasn’t going to lie to me.”

When Smith hosted McDougle on the visit, McDougle saw someone who had already had success at this university. Smith was coming off a redshirt freshman season in which he led the ACC with 126.7 all-purpose yards per game.

About a month after his visit, McDougle committed to the Terps. Soon after that, he enrolled in summer classes at Maryland. He and his high school teammate would be back on the same field.

“I didn’t really try to sell him on anything,” Smith said. “I felt like he would be able to maximize his potential, get a good degree and his family would be able to see him all the time. He’s a big family guy.”

While McDougle said former Connecticut tight end Sean McQuillan had been talking trash for much of the Terps’ game with the Huskies on Sept. 14, 2013, he blanketed McQuillan when former quarterback Chandler Whitmer hit him on an out route in the third quarter.

“I finally had a chance to hit this clown,” McDougle said. “When I hit him? It felt like hitting a wall.”

Minutes after celebrating his 49-yard interception return for a touchdown to put the Terps up two scores, McDougle was on the ground with trainers checking out his shoulder.

McDougle recounts feeling his shoulder dislocate, though he understood that it was a common injury. This time, though, was different.

“They would put it back in … and it would just slide back out on the field.”

The disappointing news came after McDougle build a name for himself on the Terps defense. He started all 24 games his sophomore and junior seasons. In 2012, he finished with 71 tackles, the most among Maryland defensive backs.

About 45 minutes down the road, Smith had become a prominent receiving target for the Baltimore Ravens.

Things had been going great for the Stafford graduates. McDougle’s draft stock was on the rise, and Smith was proving his worth in the NFL.

That was until McDougle’s third game of his senior season. It marked his final game in a Terps uniform.

But having worked with McDougle for three years at Stafford, coach Chad Lewis knew McDougle still had the potential to follow in Smith’s footsteps.

As McDougle lay in the hospital bed, Lewis called him and made sure he knew it.

“I said ‘Dexter, the next time I get to see you play will be on Sundays.'”

McDougle looks back on his college career-ending experience and plucks out the positives. While he wasn’t supposed to be up and walking one week after his injury, McDougle watched from the sideline as his team clobbered West Virginia, 37-0, in front of more than 55,000 fans at M&T Bank Stadium.

As one of the team’s vocal leaders, McDougle convinced himself he had to be there. Smith also watched the game from the stands.

“I didn’t care, man,” McDougle said. “I just wanted to be there for my boys. I wanted to be that leader. I was still helping my young guys playing corner.”

Just as Smith acted as the teacher, role model and friend to him, McDougle naturally filled the same role for his teammates. He mentored defensive backs Sean Davis, now with the Pittsburgh Steelers, and William Likely, a first-team All-Big Ten performer last season.

McDougle attended every practice and game in his final season. His dedication to the team in 2013 influenced Edsall to create the “Dexter McDougle Ultimate Team Player Award”. Fellow cornerback Jeremiah Johnson most recently won the award in 2015.

Overcoming adversity is something McDougle had gotten used to.

McDougle received an invite to the NFL combine, though he was still nursing his injury. But the 21-year-old remained confident and optimistic of the days that would come after he completed his rehabilitation.

At Pro Day, McDougle finally had a chance to showcase his skills to pro scouts.

“It was my debut … a lot of pressure obviously,” McDougle said. “That’s just something that comes with this sport.”

McDougle ran a 4.43 and flew through the defensive back drills. The injury didn’t appear to be a factor for him, or for the New York Jets, who selected McDougle in the third round with the 80th overall pick in the 2014 NFL Draft.

“Everything still worked out,” McDougle said. “That’s all that matters.”

The upcoming season provides a window of opportunity for the third-year cornerback. With the recent release of four-time Pro Bowler Antonio Cromartie, speculation has ensued regarding where the Jets will turn at cornerback.

On the other side of the country, Smith will be preparing for his second season with the 49ers after catching 33 balls for 663 yards and four touchdowns a year ago.

Still, don’t expect these two to lose touch once their individual seasons begin.

CORRECTION: Due to an editing error, a previous version of this story incorrectly spelled Torrey Smith’s name wrong in the headline. The story has been updated to reflect this correction.