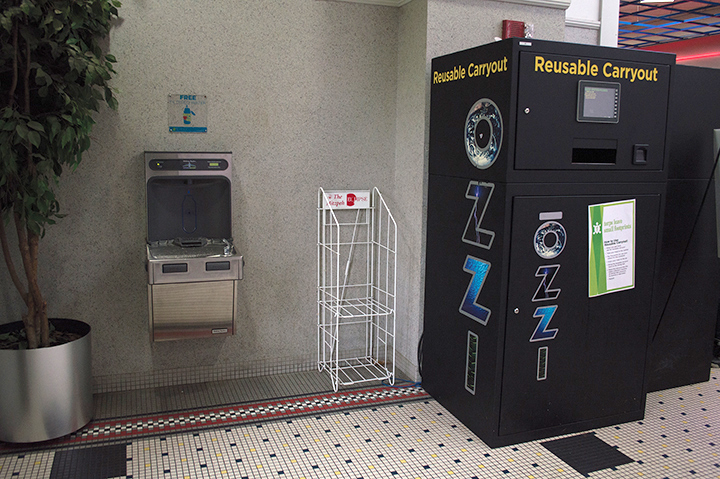 Ozzi return station in The Diner.

Dining points, Terp Bucks and carryout boxes will soon be a thing of the past as the dining halls prepare to close for the semester on May 18.

Officials are preparing to reconfigure the dining hall spaces to accommodate the anytime-dining program, which will start fall 2016.

In preparation for the new program, Dining Services is encouraging students to exchange their Ozzi boxes, or reusable carryout containers, and coins for a pack of cookies, said Bart Hipple, Dining Services spokesman. After this semester, these containers will no longer be useful in the dining halls, as students no longer have an option to take food to-go.

These containers will probably “become part of [the] sick student meal program,” however, details on this program have not yet been determined, Hipple said

Dining Services is working to develop the sick student meal program, which aims to deliver food in the Ozzi boxes to sick students, based on similar services offered at other universities, such as Cornell University and the University of Chicago, he said.

“That’s one plan that we would use the boxes for that, otherwise we’re going to be looking for creative uses for them,” he said.

Although the Ozzi boxes won’t be used to take food to-go, Chaney Schultz, Dining Service’s social media coordinator, said the dining halls are definitely keeping the boxes, noting that they were “meant to be sustainable, so throwing them away would be the opposite of what they were intended for.”

In addition to turning in Ozzi boxes, Dining Services is also enrolling students throughout this week in the biometric hand scanner program, which will be used to grant customers entry into the dining halls next semester.

Once students enroll, they will be entered into a raffle to win $25 dining dollars — there will be 25 of these given out — which will be available to use at campus convenience stores, cafes and select locations in Stamp Student Union.

“It’s really important that people come in and enroll,” Hipple said. “It will save a whole lot of trouble in the fall, so we’re hopeful students who are returning will do that.”

“Somebody told me if I didn’t do it I wouldn’t be able to eat next year, and I like to eat, so I figured I might as well check it out,” Wheeler said.

Dining Services plans to install these hand scanners and turnstiles and complete other renovation projects over the summer.

“All of the remodeling there is intended to improve the traffic flow based on what we’ve seen year after year, but we couldn’t fix or modify it until now when we modified the dining plan system,” Hipple said.

Due to the construction at the dining halls, summer programs will visit 251 North for meals, which has the “least equipment shifts,” he said.

Facilities Management is not involved with any of the dining halls remodeling, said Bill Olen, the executive director for the planning and construction department.

“It’s just a joy to talk to them and to really feel like we’re giving something different and something special to the incoming students,” Hipple said.