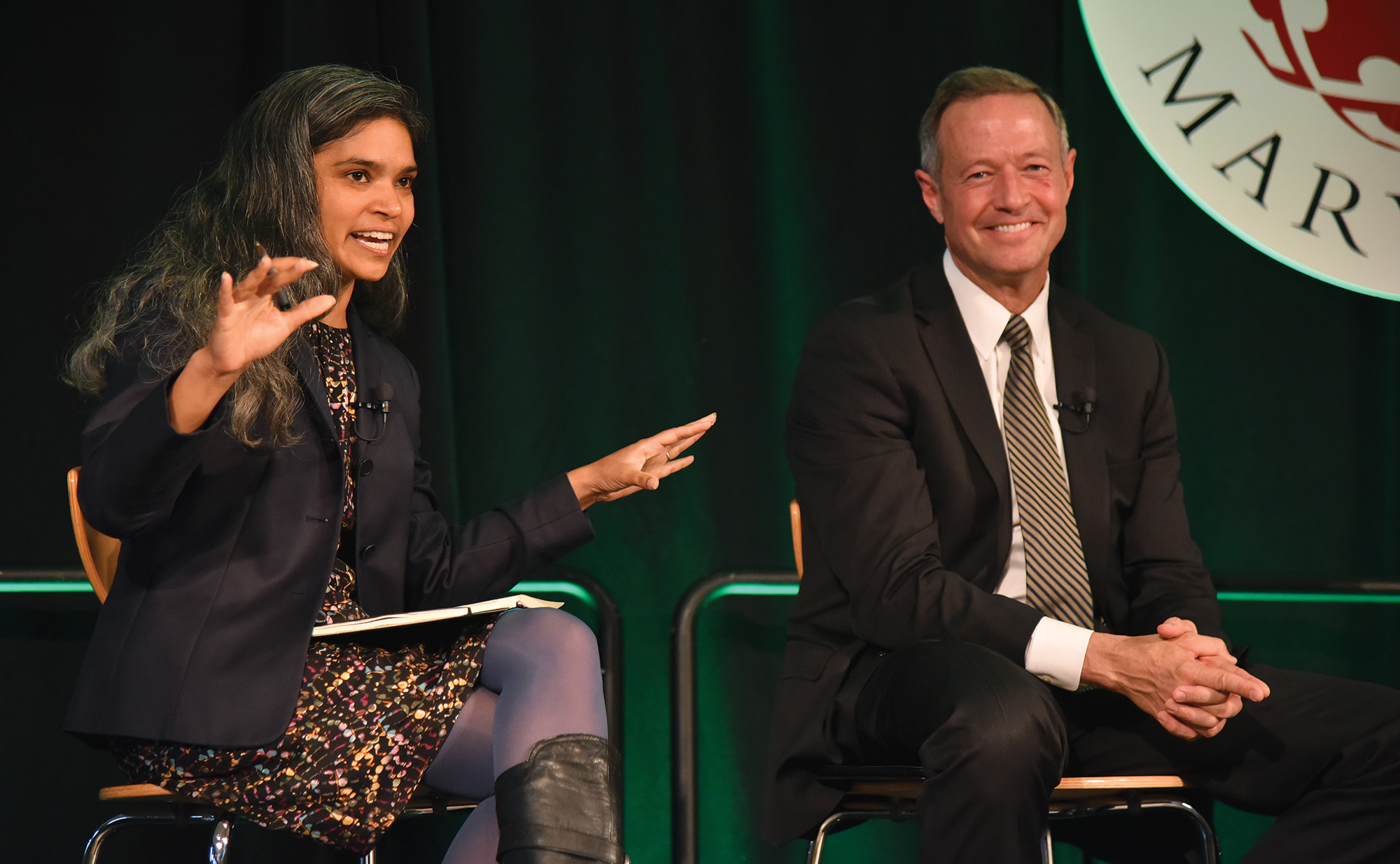 Keya Chatterjee, Executive Director of the U.S. Climate Action Network, speaks during the Climate Action Forum on May 4, 2016 in Stamp Student Union.

Beatrice O’Connor, a freshman government and politics major, arrived at the first-ever Climate Action 2016 Forum in Stamp Student Union Wednesday with one goal in mind — to understand how the University of Maryland, the state of Maryland and the world is planning on combating climate change.

“The university should be a leader in promoting sustainable initiatives across the country because we are the next generation of leaders,” O’Connor said. “This is a really exciting opportunity to learn a little bit more about initiatives that are already taking place and get a little bit of insight into what is going on in the sustainable world.”

The university-hosted event — the first of its kind — drew about 600 people from around the world and publicly discussed combating climate change through various themes, including sustainable land use, climate and society and energy, said Graham Binder, a university senior communications associate.

The forum was a prelude to the Climate Action 2016 Summit, which will be held Thursday and Friday in Washington. The summit is a closed, invite-only event in response to the Paris Agreement last winter, where 195 nations agreed to take action in response to climate change, said Robert Orr, public policy school dean.

Three sessions were held throughout the day, each with six tracks, or panels, which attendees were able to walk through freely. The tracks varied from “The Role of Academic and Research Institutions in Climate Implementation” in the first session, “Enabling a More Resilient Future Through Data-Driven Investments” in the second and “Climate Change, Poverty and Vulnerability” in the third.

This university was the perfect place to hold the forum because “we are bringing together practitioners from business, civil society, media and all of those in the academic community who have been working on these issues,” Orr said, noting the attendance at the forum was exciting because it meant that “the international agenda is indeed news.”

“[This forum] is meant to raise awareness and bring all different parties together, because government cannot do it by itself,” Loh said. “It has to be a bottom-up process across the entire society. We need to embed our whole curriculum with the sense of urgency that I know millennials already feel.”

Maryland Democratic Sen. Ben Cardin spoke at the Opening Plenary and Welcome Keynote, and touched on how the health of the Chesapeake Bay affects the state’s environment, economy and way of life. He also spoke about climate diplomacy and how the Paris Agreement’s success impacts everyday life in Congress and the United States.

“Climate change has no border. … The urgency is there, it is part of our national security,” Cardin said. “[Congress] will make sure the United States carries out its commitment on climate change.”

Tim Wirth, former undersecretary of state for global affairs and a “leader on these issues since the beginning,” also spoke at the Opening Plenary, Orr said. Wirth said he wanted “to speak to the student population in particular” about the connection between nuclear weaponry and climate change.

“If nuclear weapons are used, the radiation produced moves in a destructive swath around the globe,” Wirth said. “If carbon saturates the atmosphere, temperatures will raise, the tundra melts, ocean circulation changes … and it cannot be stopped.”

NASA Goddard astronaut Piers Sellers also addressed the importance of building on the work of the Paris Agreement at the Opening Plenary.

After a full day of discussion, O’Connor said she attended the Climate Change, Poverty and Vulnerability panel in the third session, and noted it was especially important to her because she “was really interested in how the speakers [related] climate change to poverty and environmental justice.”

“The most exciting part [of the forum] for me was the fact that everyone was so hopeful in all the presentations,” O’Connor said. Climate change “is one of the only things that can literally unite the entire international community under a similar interest.”

The discussion focused on the vision of climate change for the future, such as how to mobilize students to act on climate and how to unite people under the common goal of change through activism. Panelists and attendees also expressed climate change concerns, including how to convince policy makers to look beyond economics in order to act, barriers less-developed countries face for climate action and qualities people should look for in elected officials to help further energy policies.

Such concerns stem from “a lack of trust in one another,” O’Malley said.

“All across the country when I would say, ‘Climate change is the greatest business opportunity to come to the United States in a hundred years,’ people would applaud,” O’Malley said. “The key to that is rather than wrapping this issue in the framework of less than, we need to tell the narrative that it’s going to be a future with more: more prosperity, more health, more opportunity.”