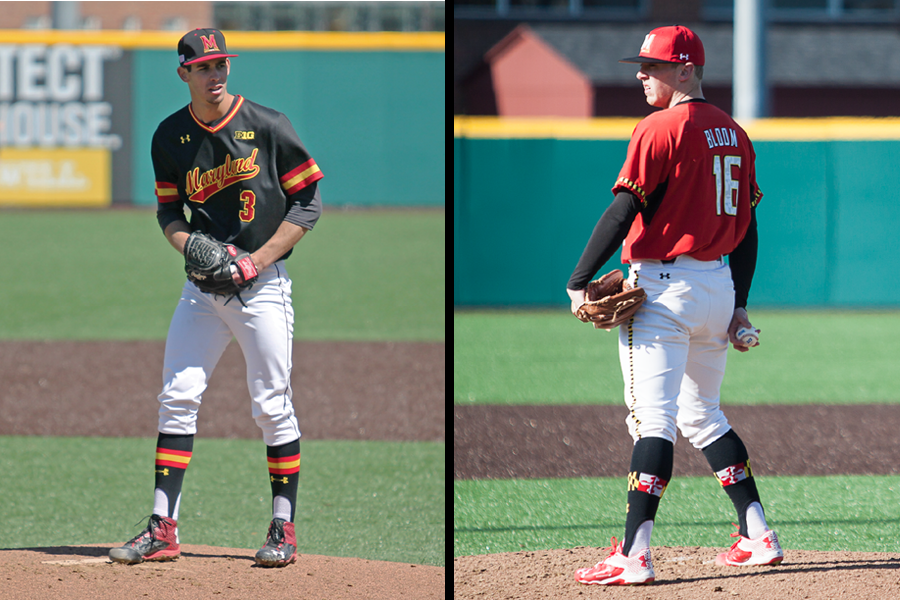 Maryland baseball right-hander Brian Shaffer couldn’t stop thinking about right-hander Taylor Bloom’s complete game against Cal State Fullerton on March 19. He didn’t want his best friend to get the best of him.

So Shaffer focused on how he could outperform Bloom the next day against the Titans. And the sophomore did, tossing a complete-game shutout in 99 pitches.

By pushing each other to improve, Bloom and Shaffer have emerged as Maryland’s stars on the mound. As respective starters every Friday and Saturday, they’ve provided a bright spot despite the team’s bullpen struggles.

“If one of us one-ups another, it’s not like there’s bad blood between us,” Shaffer said. “It makes us better. Bloom comes out and does something, [then] I come out and do something better, and he wipes the board with it.”

Bloom and Shaffer, who hold ERAs of 2.10 and 2.51, respectively, competed against each other for in-state high schools about an hour apart. But they didn’t meet until their official visit with the Terps in the fall of 2013 as high school seniors.

While they got along then, the duo became best friends when former right-hander Bobby Ruse needed two more roommates in The Varsity last year. Bloom and Shaffer were placed together, and it didn’t take long for them to form a tight bond.

“We have a lot of similarities,” Shaffer said. “We’re both really clean. We don’t like to mess anything up. We’re really similar in our sense of humor.”

“We have a lot of similarities, other than he’s a little taller than me,” added Bloom, who stands 6 feet tall compared to Shaffer’s 6-foot-5 frame. “We’re always goofing around with each other and making jokes.”

Bloom and Shaffer started competing against each other in practice, trading tips to adjust to college baseball before either played his first college game.

Bloom’s best pitch is his changeup, while Shaffer’s is his slider. They talk about the grip they use and the mentality they have when throwing it to help each other develop their arsenal of pitches. On days they don’t have practice, the duo plays catch and critiques each other’s throws.

Shaffer outperformed Bloom his freshman year, starting 11 contests. Bloom struggled to find a consistent role and didn’t earn a rotation spot until late in the season, starting five games. In the postseason, though, they both played pivotal roles.

During the Big Ten Tournament, Shaffer held Illinois to one run to help Maryland snap the Fighting Illini’s 27-game win streak. Then in the Los Angeles Regional final against No. 1 overall seed UCLA, Bloom earned the win to clinch the Terps’ second straight Super Regional appearance.

“They both threw a lot of big innings for us last year,” associate head coach Jim Belanger said.

While Shaffer sat out this summer with an arm injury he suffered in the Los Angeles Regional, Bloom shined for the Gaithersburg Giants of the Cal Ripken Collegiate Baseball League. In the fall, though, they returned to compete in College Park.

Belanger pitted Bloom and Shaffer against each other in the bullpen, tracking who threw the best strike percentage. In the weight room, the competition didn’t stop, as the pair tried to outdo each other in lifting heavier weights.

“They’re both competitive by nature,” Belanger said. “They give everything they got every day.”

This season, Bloom and Shaffer, who have combined to throw five complete games, have started back-to-back contests every weekend. They began as the respective Saturday and Sunday starters, but as they improved, their schedule moved to Friday and Saturday.

So Bloom charts his observations and preps Shaffer with the tendencies of each opponent afterward.

“He’ll explain to me all the batters, where to throw it,” Shaffer said. “He’ll say, ‘Keep it low to this guy; throw it inside to this guy.'”

Bloom and Shaffer still live in the same apartment where they bonded last year as rookies watching one of their favorite TV shows, Impractical Jokers. Those smiles vanish, however, when they step onto the mound.

After Shaffer threw two complete games in fewer than 100 pitches last month, Bloom focused on accomplishing that feat, too. So he felt relieved after throwing a scoreless complete game in 90 pitches against Ohio State on April 8.

Last weekend against Minnesota, Shaffer’s two runs in eight innings outshined Bloom’s efforts. Bloom will have that in mind when he returns to the mound Friday against Purdue.

“Between [Shaffer] and Bloom, there haven’t been too many poor starts,” coach John Szefc said. “It’s always better to prepare with another guy. They’ve kind of latched onto that and adopted that. It helps drive them, that friendly competition.”