At Washington’s Nomad Yard Collectiv, thrifting is a journey 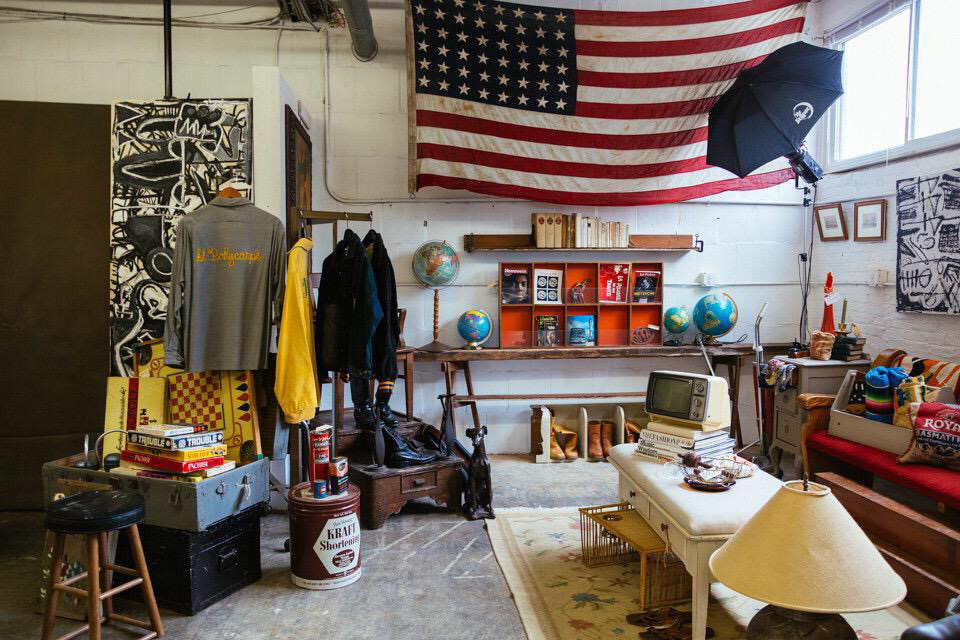 If you aren’t looking for them, it’s easy to miss the dusted blue doors of Nomad Yard Collectiv in Washington. Its name is very humbly printed in faint white on the windows of a warehouse space on New York Avenue and someone headed to Union Market or another, larger destination would have to come to a full stop to really see it. But if that stop is made, the trip inside is worth it. While the vintage store has only existed for less than two years, its origin story began decades ago, when its owner, Desiree Venn Frederic, first immigrated to the United States at age 7.

Originally from Sierra Leone, Venn Frederic was raised by her grandparents while her parents resided and worked in America. Moving here permanently was expectedly simple for her, as she had visited many times beforehand to see her family.

“I had lived in London and other countries, so it wasn’t too exciting to me,” Frederic said. “It was like another trip.”

Starting school here, however, was a different story. Although Venn Frederic was actually an American equivalent of a third grader in age, she tested into the sixth grade intellectually.

“You’re taught so much more in other countries,” Venn Frederic said. “You’re taught about the world, and quicker. You’re taught how to relate to yourself so that you can remember it.”

Her advanced education level led her to be very frustrated in class while attending a Catholic school, much to the dismay of the nuns who taught her.

“If it wasn’t true to me or true to what I had experienced, I’d question it,” Venn Frederic said. “So I got in trouble all the time, not because I was disobedient, but because I was curious. I was inquisitive.”

In her first five years in America, Venn Frederic lived in New York, Boston and eventually this state, where she went from Gaithersburg to Beltsville and ultimately to Burtonsville. She remained in the latter until about a year ago, when she moved to Washington.

She lived here under a Temporary Protected Status, which is given to those typically fleeing a war-torn country like Sierra Leone, where a civil war broke out just weeks after Venn Frederic left. The title of TPS allowed her to go to school and work just as everyone else did. She even held a position at Saks Fifth Avenue, where she gained a thorough knowledge on couture.

However, with the sweeping immigration policies set forth by the Intelligence Reform and Terrorism Prevention Act of 2004, Frederic became undocumented at age 24, and would remain undocumented until age 31.

“Being undocumented is a status, a nonstatus that actually tells you [that] you have no legal right to exist in the United States of America,” Venn Frederic said. “And within that, it means you cannot work legally, you cannot travel legally, few people can actually obtain or open a bank account. You can’t get a driver’s license. You don’t have health insurance. You just become a non-entity, which is a really stifling place to exist.”

For a person who does not “know what it means to not work,” being told she could not work for all of those years was “the most challenging” part of the whole ordeal.

“They’d given me a notice in 2004 telling me I had to leave, and I wrote them back and said I would not,” Frederic said. “I firmly believed I had a right to be here, like everyone else.”

Finally in 2013, she went in for her hearing regarding her immigration status. The court decided that because she was refusing to leave the country, the only solution was to attempt to forcibly deport her. She was then detained for six months, spending two of them in solitary confinement. That proved to be the most challenging period of her life.

“It taught me my own strength and my own resilience,” Venn Frederic said. “It taught me that we live in a really ugly world, where there are people who exist to hurt other people.”

After fighting her case relentlessly, she was released as a documented citizen and was able to return to her home. In those few months she’d been imprisoned, she took that time to formulate her greatest idea yet.

Consequently, by October 2014, she opened the doors of her first location for Nomad Yard Collectiv. Today, she works with 38 different antique and vintage collectors that help her fill the warehouse space with artifacts from every conceivable decade and country. Frederic estimates there are more than 90 countries represented in the exquisite and handpicked clothing, art and music the store holds.

Some of Frederic’s favorite pieces include a black and gold matador jacket, which she wore to her first collaborative event with Urban Outfitters, as well as the store’s vibrant Afghani pieces and collection of Japanese pre-World War I kimonos.

However, Venn Frederic designed the store to be much more than just a clothing vendor.

“Nomad Yard is very much the space where all of my experiences and the experiences of those that I’ve encountered in my life journey culminate,” Venn Frederic said. “The people who taught me what it means to be self-aware … to be proud of one’s culture and heritage … what it means to value human life … what it really means to connect to one another, to create spaces where you and I can actually sit down and learn about each other. That’s what this space is.”

Now, her store is approached in a variety of ways. She said the coolest experience is when parents bring their kids into the space to complete homework assignments and do research.

“That’s exciting!” Venn Frederic said. “They come and they go through the music or the vinyls or the books. They come in and research the textiles and fabrics from the 1930s, the Great Depression era. I think it’s so beautiful.”

Children are not the only ones who view the store as perhaps one of the coolest museums out of federal hands.

Venn Frederic was recently approached by the Smithsonian after a curator came to one of her many art program events. She explained to him that what she curates is more than just clothing; it’s history. So he then came back with a team and spent hours in Nomad Yard just looking at all of the amazing artifacts it housed. As a result, at the end of May she will have her personally curated exhibit with the Smithsonian Asian Pacific American Center, and is also in the process of filming a pilot for a Smithsonian TV series about her store.

In addition to the main location, which Venn Frederic refers to as ” 411″ after its address, Nomad Yard also opened its second location on 14th Street two months ago. The new 800-square-foot space is in Mulebone, a restaurant created by Andy Shallal, owner of the Busboys & Poets chain. The second space has been another great learning experience for Frederic, who had to expand her team to maintain both locations.

“It is a lesson on how malleable I am, how quickly I can learn, I can adjust,” Venn Frederic said. “Everyday it’s something new. Everyday it’s an adventure.”

CORRECTION: Due to a reporting error, a previous version of this story identified Desiree Venn Frederic as Frederic on second reference. This article has been updated.