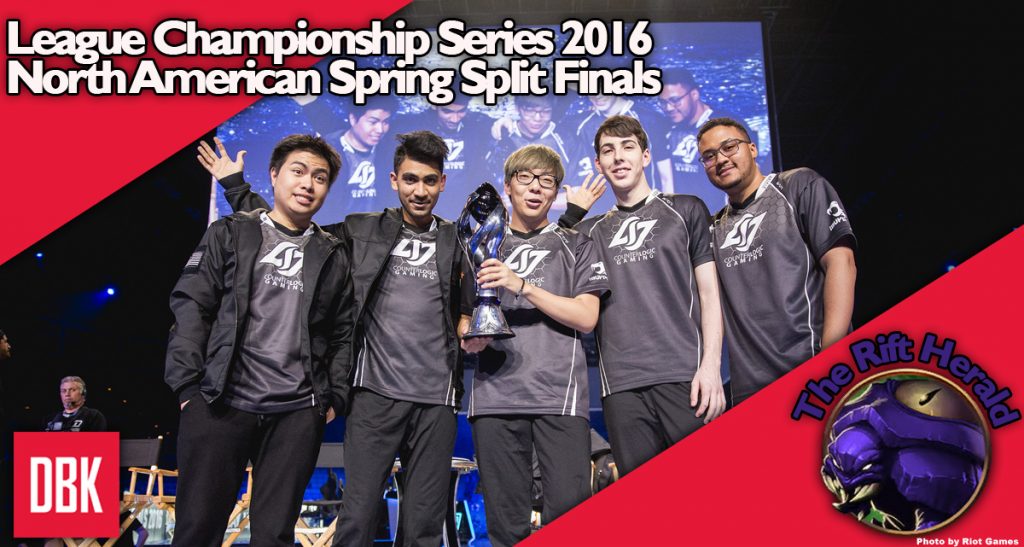 Fans from all over piled into Mandalay Bay in Las Vegas to watch the ancient rivals duke it out.

CLG ended up taking home the trophy and the ticket to Shanghai, since they will now be representing North America at the Mid-Season Invitational in May.

TSM put up a great fight, but CLG got the best of them.

TSM focuses on a more “protect the carry” composition, piling resources either into their mid-laner, Bjergsen, or their AD-carry, Doublelift. Their top-laner, Hauntzer, picks up a nice meta tank to peel for the team, and Svenskeren does whatever he needs to do to balance out the composition.

CLG, however, takes a slightly different approach. They play with three carries, top-laner Darshan, mid-laner Huhi and AD carry Stixxay. Support Aphromoo is tricky as well, since he’s known for being the playmaker.

Darshan excels with fighting-based top-laners who can be built in many ways, like Fiora, Jax and Poppy. Huhi brings out high-damage dealers like Leblanc, Corki and Ryze. So when you have four high priority targets on CLG, who do you try to focus on as TSM?

CLG lucks out in this case. They typically can just dive in on Doublelift if there isn’t enough peel for him. After that, TSM is out of damage, and it’s just easy clean-up.

Internet drama broke out almost immediately after the games ended because of a post-game interview Aphromoo gave that was taken out of context.

To provide some context, TSM’s Doublelift used to be the AD carry for CLG until this season. He was released for a mix of reasons, mainly because he didn’t take criticism well and tended to shut down people’s ideas.

Many Doublelift fans pointed fingers at Aphromoo for firing shots at Doublelift, since he didn’t name him in his list of past CLG players.

Aphromoo later cleared up his statement on one of his streams, saying that he didn’t list Doublelift simply because he wasn’t one of the professionals who left CLG under fire. Link, Nien and the rest were getting serious crap from everyone about their performances, and they deserved better.

A major problem that was brought to the general public’s attention was the necessity for soundproof booths for players to play in. Due to the loudness of the crowds cheering, the players couldn’t hear each other much without screaming. The competitive scene in Korea has had booths, so why doesn’t North America or any other region?

Finals were eventful, but the Mid-Season Invitational, which starts on May 5, will be even bigger.

For more information and VODs, check out lolesports.com.

And remember — don’t jump to conclusions when a player says something.