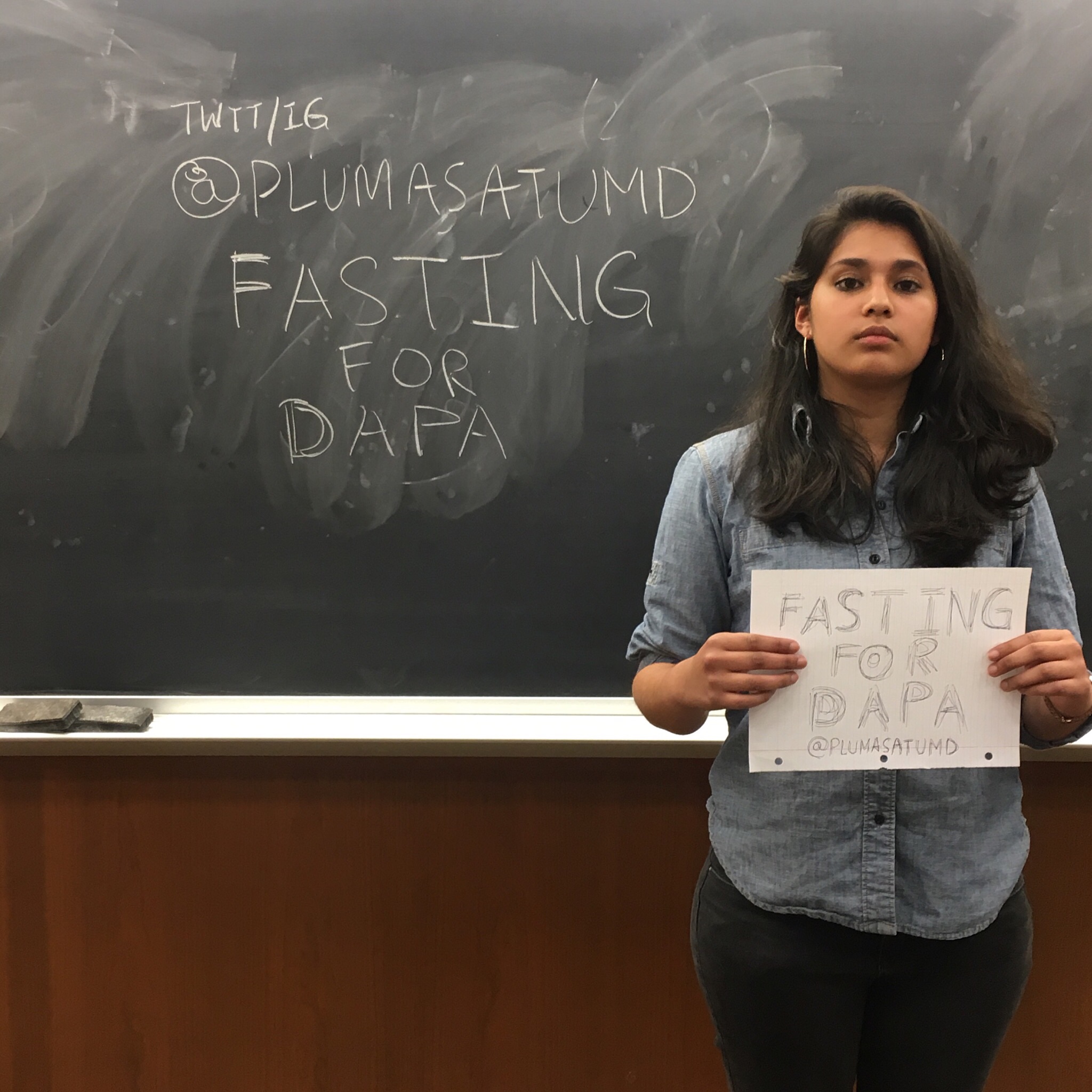 For junior Erica Puentes, fasting for a cause can help starve out negative energy and strengthen a community.

“We have a collective spirit as a community, and all of our energies and all our souls connect to form that community spirit,” said Puentes, an African-American studies major. “If I’m starving myself, I’m detoxing myself and I’m figuring out how to not give more negative energies into the collective spirit.”

Fasting is when someone chooses to not eat, drink or both for a certain amount of time of their own will. The type of fasting that PLUMAS is doing is known as a short-term fast, meaning participants rotate between an unrestricted diet and avoiding foods and usually consume low-calorie drinks, according to OrganicFacts.net.

Puentes and four other PLUMAS members at the University of Maryland are fasting leading up to the Supreme Court’s meeting Monday, when it will argue United States v. Texas, a case that claims programs such as the Deferred Action for Parents of Americans and an expanded Deferred Action of Childhood Arrivals program would increase prices of health care, law enforcement and education, according to The Hill. During this meeting, the Supreme Court plans to decide whether DAPA and DACA can be unfrozen; PLUMAS is fasting in hopes of these programs resuming.

Both DAPA and DACA have been frozen since February 2015, according to The Los Angeles Times. The group got the idea from immigrant activist group Virginia Coalition of Latino Organization, Puentes said.

“They have something called the DAPA chain: One person would go outside of the Supreme Court and fast for two days and pass it on to the next person to fast for another two days,” Puentes said. “A lot of us decided to join in the fast and do something more intensive than just two days.”

The students are fasting while at this university, as well as outside of it, posting their fasting details on social media to keep others updated on their fast and progress.

Junior Erica Fuentes, one of the PLUMAS members, started her fast — which consists of smoothies and shakes as a meal replacement — on March 28, she said. She noted she has been taking small breaks because of illness but plans to fast for the last few days until Monday.

Having a personal connection to DAPA and DACA also made her decision to fast a lot easier, said Fuentes, a government and politics major.

“I understand the significance that both of these executive orders have because of people in my family who are depending on them,” she said. “I have cousins who are recipients of DACA, who are applying to become recipients, and I have aunts and uncles who would be benefiting from DAPA because they have children here in the U.S. I understand that fear of one day being separated from your family.”

Puentes said her fast consists of water, vitamin pills, and if need be some nuts and smoothies during the week. She takes the weekends off to eat regularly to consume enough calories to get through Monday through Friday.

“I am being careful, and as a college student I have to be realistic,” Puentes said.

Puentes has been fasting off and on since March 28, while some of the other members started to fast Wednesday.

Doing this fast is a test of commitment, Fuentes said, and is “a small sacrifice we are making. … Families that are depending on both of these executive orders are going through so much more than what we are giving up.”

Nancy Mirabal, an American studies and U.S. Latina/o studies professor, said PLUMAS’ actions are powerful and noted she is not surprised PLUMAS is being proactive about something its members care about.

Puentes said PLUMAS plans to take a bus from this university to Washington on Monday to participate in the rally and stand in solidarity with the families who could be affected by this decision.

After Monday comes around, Mirabal said she hopes the members who are fasting will have a good meal because of the great amount of activism they bring to the university community.

“I hope they eat soon,” Mirabal said. “I want them to be healthy and to continue their work to move forward. We need them.”