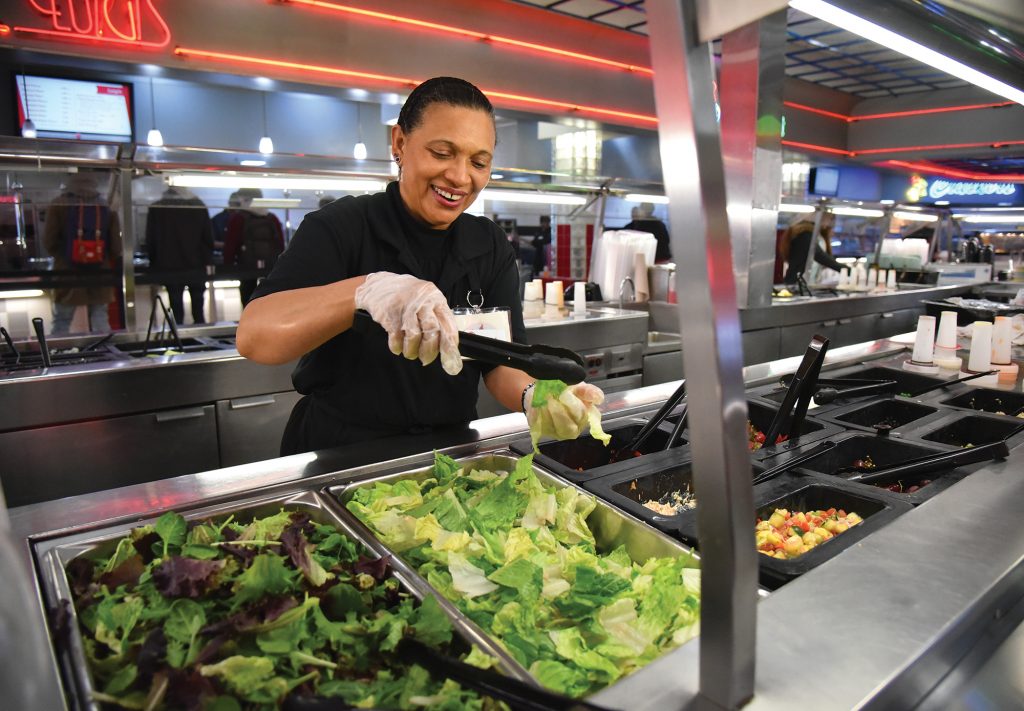 Dining services employee Maria Feliz tends to the salad bar at The Diner on north campus on April 5, 2016.

By the end of November, almost finished with her first semester of college, freshman Listya Suryani realized she was going to run out of dining points on her traditional meal plan.

“I tried to eat healthy, getting more of the fruits and the vegetables and stuff like that, but because it’s counted by the ounce, I ran out of it pretty quickly, and I had to change that,” the nutrition and food science major said.

Suryani is one of nearly 1,200 students on a dining plan who ran out of dining points during the fall semester — a number Dining Services hopes will no longer exist after the university switches to an anytime-dining program, which will grant unlimited access to the dining halls to students who purchase a meal plan.

Jane Jakubczak, the coordinator of nutrition services at the University Health Center and a registered dietitian, has been working at the university for 15 years but said she has only seen food insecurity, which the U.S. Agriculture Department defines as “limited or uncertain availability of nutritionally adequate and safe foods,” become a problem within the last five years. Now, she said, this issue comes up multiple times a month.

“[Five years ago] was the first time that I started seeing students who were really trying to eat as healthfully as possible but were really struggling because they didn’t have enough money to purchase some of the healthy foods that I was suggesting,” she said.

Of the students who visit her with difficulties affording food, Jakubczak estimates half have a university dining plan.

“That’s a lot of stress for students to have to be paying attention to and have to be worrying about on top of everything else one has to worry about in college,” she said.

“It’s become very much in the front of my mind that the big problem we’re solving by changing the dining plan is … the problem of resident student food insecurity,” Hipple said.

Dining Services looked to other Big Ten schools with similar anytime-dining programs, Hipple said, and found satisfaction rates at these schools were higher. Steve Mangan, the director of University of Michigan Dining, said there was “certainly” no food insecurity among students with a dining plan at his university, and Chris Elrod, University Dining Services marketing manager at the University of Minnesota, said the same was true there.

Hipple said dining staff realized the extent of the problem when student responses to a Dining Services and National Association of College and University Food Services survey brought up the issue of food insecurity “over and over again.”

Jakubczak also worked with Allison Lilly, Dining Services sustainability and wellness coordinator, in fall 2014 to open the Campus Pantry, which collects and distributes food to students and staff in need. Jakubczak said she wanted to work on the project after noticing an increase in the number of students who cannot afford to eat as healthily as they would like.

During its first year, the pantry served 158 clients and saw 338 visits from October 2014 to May 2015. Of these 338 visits, 34 percent were students. Seventeen percent of these students were sophomores, while

“That’s a number that we really hate to see because those are potentially students that are on the meal plan,” Lilly said.

During the fall semester, the pantry opened once a week instead of twice a month and saw 176 clients and 570 visits — 21 percent of the 570 visits were students.

“The crunch time when you might run out is at one of the most important times in the semester,” Lilly said. “That’s when you’re taking finals and finishing final projects. That is not a time where you need to be worrying about whether or not you’re going to have enough food to eat.”

Mangan said he found it was difficult for freshmen to learn how to budget an a la carte meal plan and that an anytime-dining system is more successful.

“It levels the playing field for everybody so you don’t have the haves and the have-nots,” he said. “It just has so many advantages.”

Although the current dining plans allow students to spend an average of 70 points per week, Hipple said many students had difficulty budgeting points for the entire semester.

Next year, Lilly said, she hopes students with the anytime-dining program will not need to visit the Campus Pantry.

“Anyone who is participating on a meal plan will never be in a circumstance where they don’t have enough to eat,” she said, “and that’s really an amazing thing.”