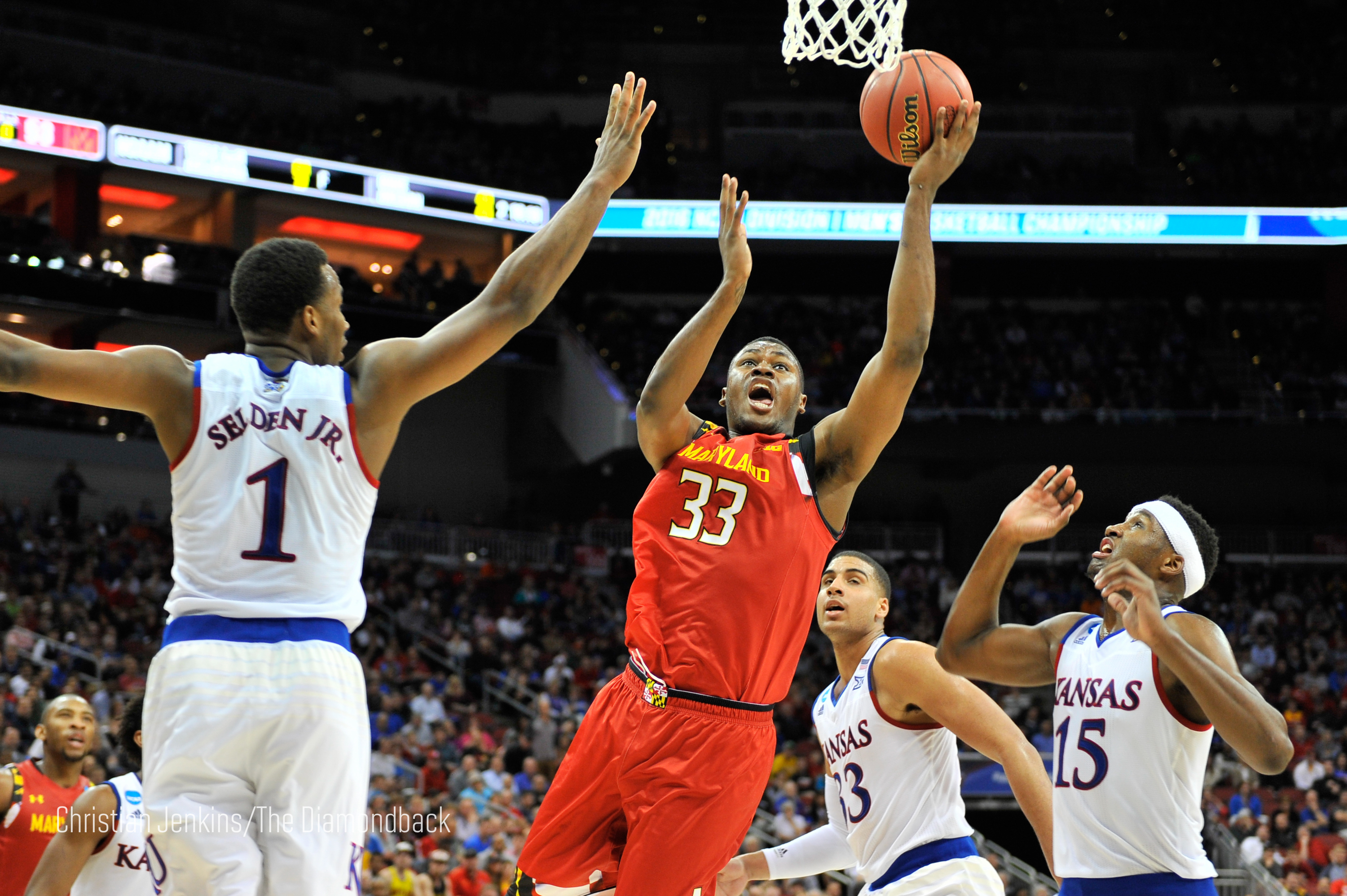 Center Diamond Stone rises for a lay up when the Terps lost to Kansas, 79-63, in the Sweet Sixteen at the KFC Yum! Center on Mar. 24, 2016. (Christian Jenkins/The Diamondback)

After playing one season in College Park, Terrapins men’s basketball rookie center Diamond Stone will declare for the NBA draft, the school announced Monday. The freshman has signed with Tandem Sports + Entertainment, meaning he won’t be eligible to return next season.

“I want to thank the University of Maryland and Coach [Mark] Turgeon for an unbelievable experience this past year,” Stone said in a statement. “Coach Turgeon really pushed me to get better each and every day. My family and I spent a great deal of time discussing my future and we felt this was the best decision as I pursue my dream of playing professional basketball. I want to also thank all of the Terp fans and the students on campus who have been very supportive since the day I arrived to College Park. It means a great deal to me. I’ll always be a Terp for Life.”

A week ago, cleveland.com reported Stone planned to declare but not hire an agent. That night, his father, Bob Stone, told 247sports.com that a decision hasn’t been made despite the report.

In draftexpress.com‘s latest mock draft, Stone is projected to go No. 23 overall to the Atlanta Hawks.

The former No. 6 overall ESPN recruit from Milwaukee arrived as a potential lottery pick after dominating at Dominican High School. The 6-foot-11 center lost his starting job seven games into the season, but he continued to provide major offensive contributions off the bench before regaining his starting job Jan. 28.

“When we first met with Diamond and his family, one of our goals was to help him achieve his dream of playing in the NBA,” Turgeon said in a statement. “Diamond has always been a very skilled and talented offensive player, but he worked hard in other facets of his game this past year. He has vastly improved his strength and conditioning and has made strides defensively. This will be beneficial as Diamond pursues a career in professional basketball. We are happy for Diamond and wish both him and his family the very best.”

Stone finished his rookie year second on the Terps in points per game (12.5), second in rebounds (5.4) and first in blocks (1.6). His breakout game came in the Terps’ Big Ten opener against Penn State when he set the program’s freshman record for single-game points with 39.

In the Sweet Sixteen of the NCAA Tournament, Stone had four fouls and recorded just five points. He averaged 7.7 points during the Big Dance.