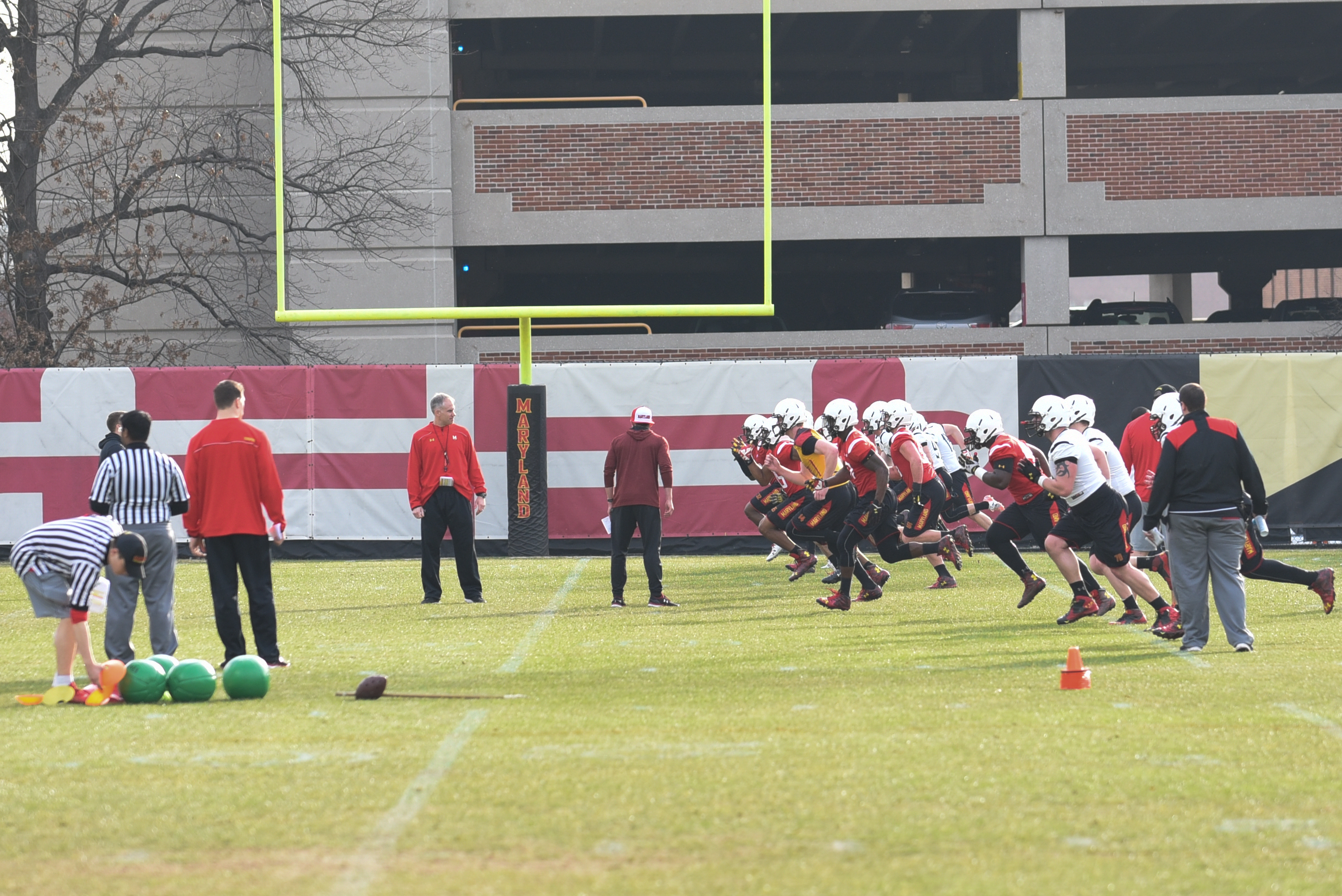 When DJ Durkin took over the Terrapins football team, safety Josh Woods said the first thing the new coach told his squad was there was no such thing as a previous depth chart. If a player started last season, he’s going to have to earn that spot again. Durkin isn’t giving any handouts.

That open competition has resonated with the Terps, forcing former starters to work to keep their jobs and providing backups a chance to earn more playing time come fall.

“When everyone is in competition, it means you are getting the ‘A’-game out of everyone at every point,” offensive lineman Brendan Moore said. “It’s going to help every aspect of the game because everyone is trying their best on every rep because they know the guy behind them is going to take over if they don’t.”

With just more than two weeks left before the Terps’ spring contest, Durkin said he’s beginning to figure out where he likes certain guys. But he doesn’t expect everything to be in place by the intrasquad scrimmage or even the start of fall camp.

Durkin wants the feeling of open competition to last as long as possible.

“It’s good when guys know that ‘I need to come out and practice today or I may lose my job or I may not be able to get the job that I want,'” he added. “So that is something that we encourage every day on every drill.”

In the secondary, there was virtually no movement during the 2015-16 season from the opening game depth chart. The veteran group of Sean Davis, AJ Hendy, Anthony Nixon and Will Likely combined to start all but one game — Likely sat out the season finale with an injury.

But the combination of Durkin’s wide-open mentality and Likely’s status as the only returner has created a new opportunity for last year’s backups — like Woods, who appeared in just six games, primarily on special teams.

“I feel like everybody came here with a brand new start,” Woods said. “Plenty of guys have been moving up, been moved down.”

After Tuesday’s spring practice concluded, Woods and Moore were both asked about the assistant coaches for their respective position groups. A common theme emerged in their answers: honesty.

“You save a lot of time with all the BS,” Durkin said, by giving players candid assessments, which is something Moore and Woods said they’ve come to appreciate.

Defensive backs coach Aazaar Abdul-Rahim is “changing the culture of the room because we can be honest with each other and say whatever but understand that we’re still brothers and we love each other,” Woods said.

Durkin considers candor the most important value in his program.

The Terps entered spring camp with a logjam at running back with rising redshirt senior Wes Brown, Virginia Tech transfer Trey Edmunds and rising sophomore Ty Johnson all in the mix. But early freshman enrollee Jake Funk, this state’s Gatorade Player of the Year, is adding a fourth name to the options in the backfield.

“Jake is having a really good spring,” Durkin said. “He’s already asserted himself as a guy that is going to play and help us for sure.”

Durkin, who has worked as the special teams coordinator at Florida, Stanford and Bowling Green, highlighted the importance of special teams after Tuesday’s practice.

“I’ve always believed that’s how you build your team,” Durkin said. “I believe that you are a selfish player if you’re not helping out on special teams.”