Rasheed Sulaimon ‘blessed’ to have been given second chance with Maryland 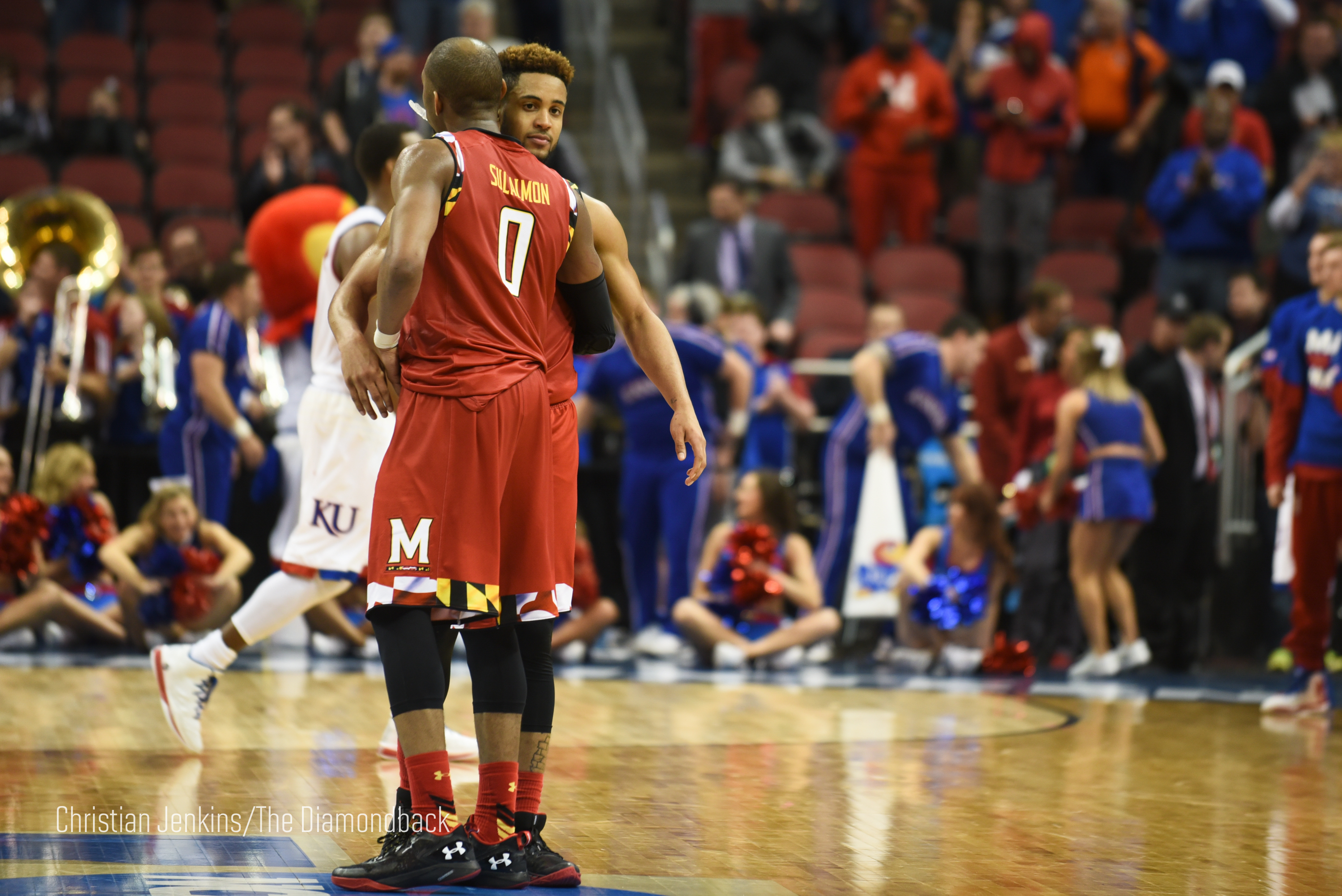 Guards Rasheed Sulaimon (0) and Melo Trimble hug after the Terps lost to Kansas, 63-77, in the Sweet Sixteen at the KFC Yum! Center on Mar. 24, 2016. (Christian Jenkins/The Diamondback)

Rasheed Sulaimon, clad in a Blue Devils shirt, sat with a group of friends in a house on Duke’s campus and watched the 2015 national championship. In front of a television screen, he looked on as his former teammates cut down the nets in Indianapolis.

At the end, Sulaimon had to step out of the room. He was crying. Sulaimon, who had become the first player dismissed by coach Mike Krzyzewski in 35 years, called his father, Kenny, to talk through his emotions.

About a year later, the NCAA Tournament brought Sulaimon to tears again — this time in a locker room more than 500 miles away from Durham, North Carolina. The senior’s career ended Thursday in the Sweet Sixteen, but he felt fortunate to have had a second chance in college basketball.

“A year ago, I had no idea what to think. I had no idea where I was going to end up,” Sulaimon said in the locker room after Thursday’s 79-63 loss to top-seeded Kansas. “Fast-forward to right now currently, I’m just blessed.”

“Rasheed has been unable to consistently live up to the standards required to be a member of our program,” Krzyzewski said in a statement when Sulaimon was dismissed.

A month later, a Duke Chronicle story named the then-junior as an alleged perpetrator of two sexual assaults. No criminal charges were filed, and Duke didn’t find substantial evidence to back the allegations.

But the dismissal and allegations were baggage he had to carry with him, issues that potential new teams had to investigate. Coach Mark Turgeon and the athletic department did so and gave him a shot.

“The memories that I have with these guys, how they accepted me, those are the memories that I’ll cherish in my heart forever,” Sulaimon said. “They didn’t have to. For them to extend their arms to me and pick me up when I was down, that really means a lot to me.”

After spending the summer at Duke finishing his degree in three years so he could become eligible to play in the 2015-16 season, Sulaimon joined a Terps program with national title aspirations.

With guard Dez Wells gone, the Terps were missing a leader in the locker room. And it didn’t take long for him to emerge as the team’s vocal presence.

“He’s been a great leader,” Turgeon said of Sulaimon before Senior Day. “Been great for Melo [Trimble]. Been great for all of us. He’s helped us get where we are.”

The Houston native was especially important in helping Trimble transition from his freshman year to his sophomore campaign. When Trimble’s shot wasn’t falling, Sulaimon stepped up to carry the backcourt scoring. And when Trimble had the hot hand, Sulaimon took over as the team’s facilitator.

“I learned a lot from Rasheed,” Trimble said Thursday. “He came from a great program. Me and him, we just bonded well over one year. It was amazing.”

After watching his stats decline over his three seasons at Duke, Sulaimon bounced back senior year. He started all 36 games, averaging 11.3 points per game and 3.5 assists.

He scored a team-high 18 points in the Sweet Sixteen, but it wasn’t enough to lead the No. 5-seed Terps to an upset over the Jayhawks.

In the minutes after his career ended, Sulaimon said he was still in shock that it was over. He was worrying about his younger teammates more than himself, wondering how they would cope with the season-ending defeat.

“I kind of grew into the role as an older guy as a big brother,” Sulaimon said. “Any big brother would tell you, whenever you go through adversity or emotional distress like this, you are always thinking about them and how you can lift them up and how you can make them feel better.”

After Turgeon talked with the team, Sulaimon stood up and spoke to his teammates. As a team leader, it was something he had done many times over the course of the season.

But this time held more weight. Sulaimon felt he needed to thank them. This all hadn’t seemed possible a year ago watching the national championship at Duke.

“I just have nothing but love for all these guys and everyone a part of this program,” Sulaimon said. “I have that love for the rest of my life.”