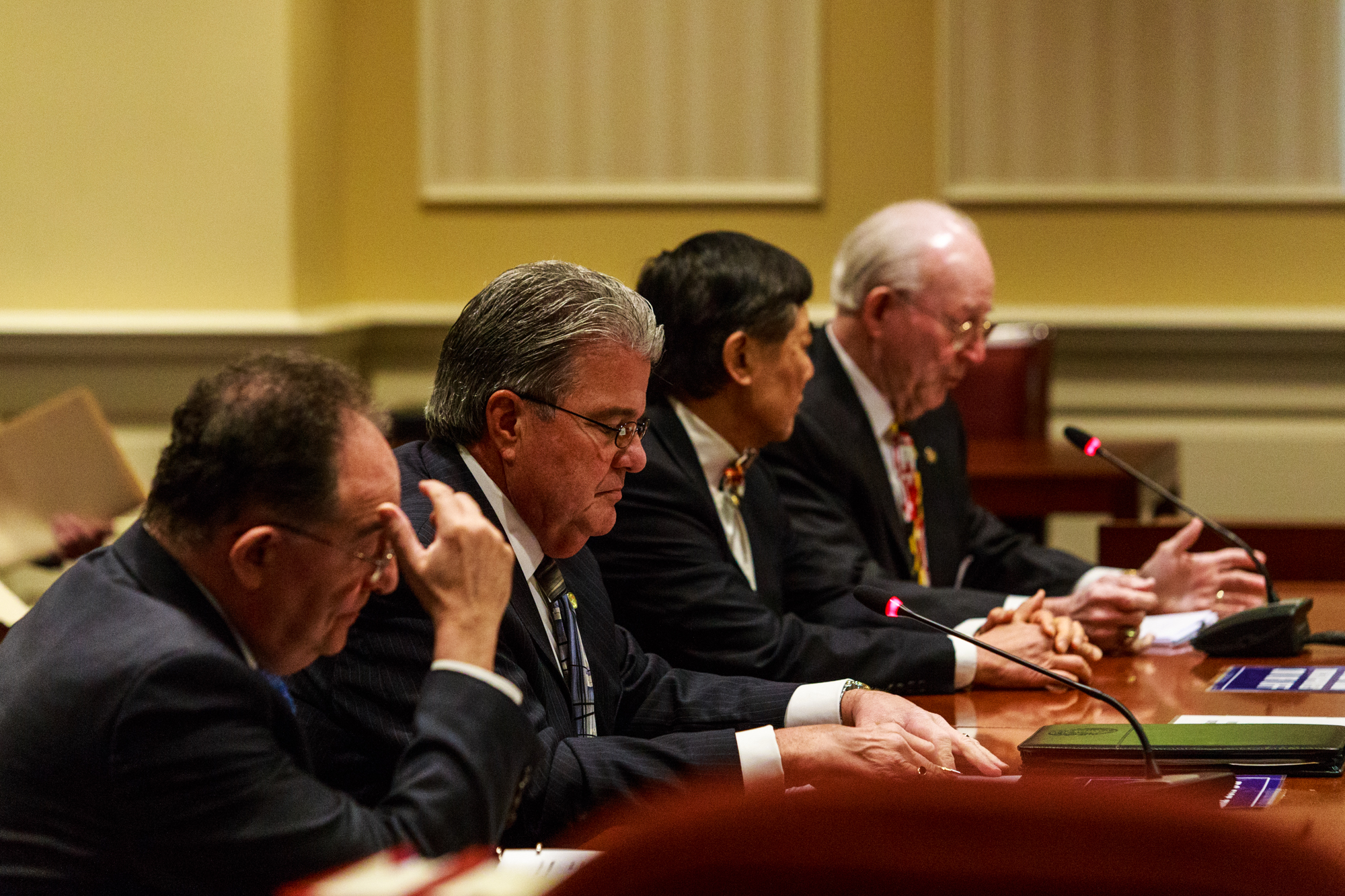 By Darcy Costello and Grace Toohey

The bill was brought to the Senate floor yesterday with favorable recommendations from the Senate Budget and Taxation Committee, but Sen. J. B. Jennings (R-Baltimore and Harford counties) proposed that they wait to advance the bill until Thursday. The senate will convene this morning at 10 a.m., where the bill came to a second reading. The Senate will officially vote on the bill during the third reading.

The budget and taxation committee amended the bill Tuesday, removing a clause that would have allowed for the combined institution to have one president in the future. It also expanded funding for Towson University and the University of Maryland, Baltimore County, according to a Baltimore Sun report.

The amended version of the legislation passed in committee, 10-3.

The University Senate voted to express its advocacy of the bill Wednesday afternoon, weeks after the Student Government Association passed a resolution in support of the state legislation on Feb. 24.

In a visit to the University Senate yesterday, University System of Maryland Chancellor Robert Caret said the Board of Regents supports the current legislation, as it “allows for the relationship between the two campuses to continue to grow.”

In a state Senate hearing on the bill March 1, university officials and student leaders again voiced their strong approval for the potential union. At the time, system officials and the president of UMB expressed reservations over the bill — namely, concerning the effect it could have on other schools in the state and Baltimore City.

“We are supportive of the bill with amendments,” Caret said to the University Senate yesterday. “It has a much higher chance of success if we all agree it’s a good idea.”

SGA President Patrick Ronk said he was pleased the bill made it out of committee and added that the amended version made sense, given it would keep stakeholders happy while still moving ahead with the strategic partnership.

“The amendments aren’t surprising to me. There was a big push by UMB to remove the clause about two presidents becoming one president,” Ronk said. “And there had been some conversation about the system becoming imbalanced, so the additional appropriations will please people involved.”

However, Ronk said he was surprised by some of the opposition to the bill from student body presidents at the system’s other institutions.

“There seems to be a fear that College Park will get better and leave everyone behind, which is kind of ridiculous to say — that you want to hold back your state’s flagship institution because you don’t want them to be too good,” he said. “I disagreed with a lot of their sentiments.”

The partnership, as written, wouldn’t have a negative impact on other schools in the university system, said university President Wallace Loh, who cited the positive effects of the MPower initiative, which he called one of the “best things since sliced bread.”

“The idea that if two schools form a partnership — not a merger — all the sudden we start cutting off other schools? It hasn’t happened; nobody wants it to happen,” Loh said. “It didn’t happen when we formed MPower … and all we want is for it to be institutionalized.”

University officials said they would continue monitoring the bill as it moves through the legislative process.

“We believe this bill builds on the success of our collaboration with the University of Maryland, Baltimore and would boost the economy of the state of Maryland,” a university spokesperson wrote in an email.

CORRECTION: Due to a reporting error, a previous version of this story stated the Maryland Senate would vote on the Strategic Partnership Act Thursday. The bill will go to a second reading Thursday, and the Senate will vote on it following the third reading. The article has been updated.