REVIEW: ‘Brooklyn’ is an old-fashioned, romantic work of art 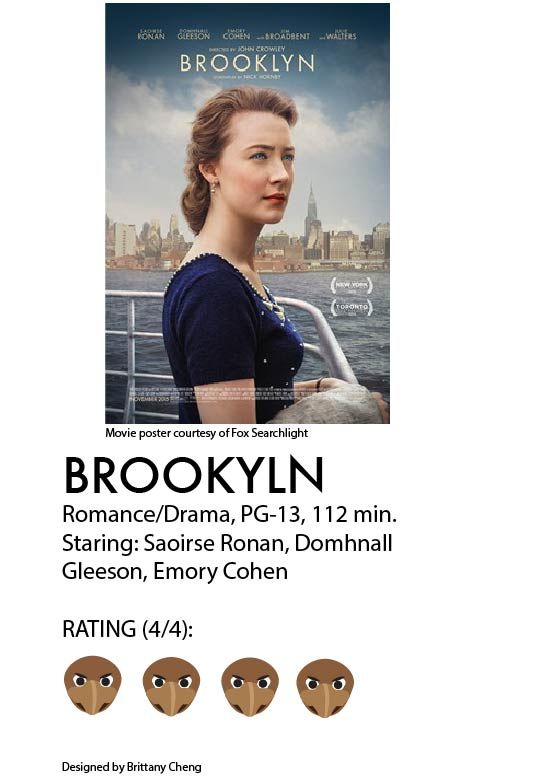 There is something lovely about watching an old-fashioned romance like Brooklyn’s play out on the silver screen. John Crowley’s newest film about an Irish immigrant who comes to New York in the 1950s is like flipping through a sepia-toned photo album. It feels classic, simple, like a history you know.

After being promised a slice of the American Dream by a family friend and priest, young Eilis Lacey (Saoirse Ronan, The Grand Budapest Hotel) immigrates to the Unites States via ship, leaving her sister and mother for a new future. While on the ship, she meets one of the most compelling characters of the film: a wild woman who gives her all of the advice she needs to get through customs upon arrival. It is a shame she never resurfaces.

Eilis is ridden with homesickness for weeks while boarding with a group of unmarried women, and the passionately conservative elderly woman who runs the home and finds nearly no topic appropriate for the dinner table. Her old-fashioned, scornful nature brings a humor to Eilis’ life and the film in general.

In her struggle to assimilate, Eilis writes letters to her family about her job, which she hates, and her budding romance with a timeless Italian New Yorker-type guy named Tony (Emory Cohen, The Gambler). Their romance develops slowly and classically on the screen, like a flower blossoming in a series of Polaroid photos. It is blatantly adorable.

Family conflicts bring Eilis home to Ireland, where she more or less accidentally initiates a love triangle with a rugby player she grew up with. The film then goes on to realign Eilis’ loyalty with one man in particular, and the ending could not be sweeter.

Brooklyn’s screenplay was written in a way so proportional that the romance manages never to overcome the plot completely. So if old-fashioned love is not your cup of tea, fear not. There is a hauntingly sad element of loyalty and the struggle to assimilate laced into the overarching theme. Colm Tóibín, who wrote the novel the film is based on, worked with Nick Hornby to ensure this masterpiece was well balanced.

Both effortlessly tear-jerking and laugh-evoking, this film already has managed to land many awards. Among these are the 2015 Vancouver International Film Festival’s People’s Choice Award, Mill Valley Film Festival 2015’s Audience Award in the world cinema category and the New Hollywood Award at the 2015 Hollywood Film Awards for Ronan’s performance. Cohen, also rewarded for his individual performance, was named a Variety Top 10 Actor to Watch at the 2015 Hamptons International Film Festival.

The beautiful simplicity of the film is so well received, according to Lionsgate, that it had the biggest opening weekend for an Irish film in Ireland’s box office since Neil Jordan’s 1996 film Michael Collins. Easily one of the best dramas of the year, Brooklyn deserves every penny you can drop on it.