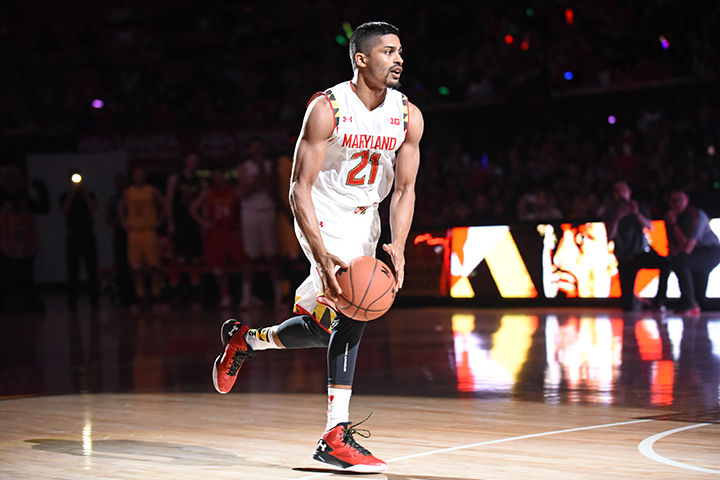 Guard Varun Ram runs for a lay up during introductions when the Terps hosted Maryland Madness on Oct. 17, 2015.

His mom was flying home from visiting relatives in Chennai, India. She landed at Dulles International Airport to a call from a Washington Post reporter.

His dad was teaching a night class in Germantown. Upon turning on his phone after the lesson, he got a text message saying Ram was trending on Twitter. Another text read, “Your son saved Maryland.”

Shaun Jayachandran, a former coach who taught basketball with Ram in India for two summers, though, was watching the waning moments of the Terps’ match with Valparaiso. Sitting in his living room, Jayachandran texted ESPN anchor Kevin Negandhi about the heart-stopping finish.

Their messages ranged from “Oh my gosh, did you see that?” to “What an amazing situation.” They had watched Ram spend the first 39 minutes and 47 seconds on the bench, leaping in and out of his seat, shouting the Crusaders’ play calls and cheering for his teammates.

But it was the remaining 13 seconds that triggered their conversation. Ram had entered for the final possession and swiped away Valparaiso’s potential game-tying 3-pointer.

Just like he had on courts and classrooms across the globe, Ram made a difference.

‘WANTED TO PLAY SO BAD’

Ram had a dilemma in middle school.

His parents were still at work when his bus got home, so he couldn’t get into the local fitness center, where the policies didn’t allow children under 14 years old to enter without supervision.

And he’d outgrown the plastic basketball hoop in his basement, a gift from his grandmother for his ninth birthday that fueled his dreams to be like Juan Dixon.

Most days, Ram rushed to finish his homework — his parents’ rule to play sports. Then, he’d walk to the gym and tell the front desk staffer his parents were already inside.

“I just wanted to play so bad,” Ram said.

Around the same time, Ram played in a recreation league all-star game. One spectator was River Hill High School’s junior varsity basketball coach. After the game, Ram introduced himself and said he wanted to play for the Hawks.

Ram made the JV squad his first two seasons. On varsity as a junior, Ram teamed with Michael Campanaro — now a Baltimore Ravens wide receiver — to advance the Hawks to the regional finals.

“He was probably, by far, the quickest kid that I had ever coached,” varsity coach Matt Graves said. “That includes Michael Campanaro.”

Ram, a 5-foot-9 guard, also played for an AAU team and placed third at a national tournament in his senior year.

Ram went to basketball camps. He fielded calls from Division III coaches. But the prospect of achieving his dream of playing in the Ivy League — a path that would also satisfy his parents’ desire for a top-level education — was bleak.

The guard knew he had to do something different.

Their son had just graduated from River Hill with honors and had acceptances to this university and a presidential scholarship to UMBC.

But to the dismay of his parents, Kolandavel and Santhini Ramasamy — neither of whom were athletes — Ram’s dream of playing college basketball meant he spent his first year out of River Hill playing basketball at The Winchendon School.

“He felt something was not right, and he was not happy,” Santhini Ramasamy said. “He told me, ‘Mom, I know it’s different.’”

During his year at the prep school in Massachusetts, Ram improved his skills enough to move to Division III Trinity College for the 2011-12 season.

Two years in New England, though, left Ram homesick. Plus, he was considering changing majors, so he transferred to this university. Ram remembered people told him he “was going to have to give up basketball.” He wasn’t going to be able to cut it at a Division I program.

But Ram worked out with a local coach, Geoff Reed, twice a day, every day during that summer. The duo couldn’t find open gym time, so they set up camp on River Hill’s outdoor blacktop.

All the while, Ram wasn’t guaranteed a tryout with the Terps in the fall.

“He still had this passion, and he wasn’t sure he would get a shot at Maryland,” Santhini Ramasamy said. “Then he tried out and that was just like the turning point in his life.”

The Terps coaches brought Ram to tryouts in late September 2012 and continued to invite him back.

A few weeks later, Ram opened his email and saw the program requested to add him to its roster.

At practice that day, Turgeon pulled the Terps into a huddle and named Ram to the squad, a moment he said sparked “goose bumps out the wahoo.”

When Ram called his mom to share the news, she rushed to tell all of her colleagues.

He had to sit out the season as a transfer, but Ram played in the team’s Summer Basketball Tour in the Bahamas in 2013. Soon after, Ram’s “second-best feeling ever” came when Turgeon offered him a scholarship.

“Oh, God,” Santhini Ramasamy said, “it was just like a double treat.”

But in traveling with the Terps that summer, Ram passed up an opportunity to make a difference across the globe.

‘THE IMPACTS YOU MADE’

One summer after Ram competed in the Caribbean, he was shooting hoops in Chennai where his parents emigrated from in 1988.

Jayachandran, who met Ram during a high school basketball camp, had started the Crossover Basketball and Scholars Academy to promote athletics to underprivileged kids.

In the same region he used to visit relatives every couple years with his family, Ram was now part of the program’s “Hoops Creating Hope” camp for two weeks of summers 2014 and 2015.

Ram and the volunteers visited schools during the day. They also went sightseeing to experience the culture — Ram already spoke the native tongue, Tamil — and related to the kids.

Then from 4 to 6 p.m., the kids traveled to the camp to learn basketball. Some of the children didn’t know anything about the sport. Some didn’t even have shoes.

But after two weeks of ball handling, shooting, yoga and classroom stations, the kids came to love the sport and its lessons. The volunteers also promoted daily themes like leadership, communication and teamwork.

Ram demonstrated those concepts when one of the volunteers leading the yoga station had to leave for an emergency, and he stepped in to lead the poses for the day.

“Away he went,” Jayachandran said. “There was no question. I just looked at him and said, ‘Hey, I need you to do this,’ and he jumped.”

One of the children from Ram’s first trip paid extra attention. A boy named Phillip traveled eight hours by train to attend with nine of his classmates from an institution for orphans and marginalized boys.

Phillip had played basketball before, but to do so at Crossover, his classmates lived in a hostel for two weeks.

Phillip learned moves and played one-on-one with Ram. Later that year, Phillip and his U-18 team won a national tournament between all of the Indian states.

He credited Ram, one of a few current Division I players of Indian heritage, as his inspiration on the court.

“When you hear stories about the impacts you made on them and how they’re doing better because of that camp,” Ram said, “it gives you goose bumps.”

“I don’t know how he does it,” Warren said. “Much smarter than the average bear.”

Ram, though, came back for a fifth year to pursue a graduate degree in supply chain management. That way, he’d be more marketable for consulting jobs and medical school, and he’d exhaust his “gold” in eligibility.

Because he’s undersized, Ram’s relied on his speed, hustle and understanding of the game to keep his spot on a loaded Terps roster.

“That’s what’s gotten me to this level,” Ram said. “It hasn’t been bodying people on the post or overpowering anyone.”

So ever since Melo Trimble arrived in College Park as a highly touted then-rookie last season, Ram’s job has been to make Trimble’s job difficult.

In almost every workout — half-speed scrimmages included — Ram shadows Trimble in a full-court press, jabbing at the ball and taking charges.

“He’s a nonstop ball of energy” when practice isn’t in session too, Warren said, bounding from stretching to weight lifting to recovery and film study.

Guard Dion Wiley said Ram will “just get under you skin and irritate you” with his tactics, but he’s also the player teammates come to for help.

Early in forward Damonte Dodd’s freshman year, he had trouble adjusting to the speed of college basketball. So he’d sit on the bench next to Ram and ask for help because the coaches were busy.

Transfer guard Jaylen Brantley picked Ram’s brain while learning a new offense this offseason. He, along with freshman center Diamond Stone, also leaned on Ram to adjust to school.

And when his team has a rough practice, Ram will play some of his rap or jazz music, “just to get our mind off of it,” Trimble said.

‘ICING ON THE CAKE’

As Valparaiso’s shot was tipped to the Terps and the buzzer signaled their successful stand in the program’s first tournament game in five years, Ram was soon airborne in the embrace of former forward Jon Graham.

The rest of the Terps joined in, slapping Ram’s head. They were thrilled to see the guard’s pesky moves foil someone else’s play.

Turgeon took a deep breath from the sideline and thought “Thank God,” his decision to insert the former walk-on paid off.

After all, the coach was in a tough spot. Two of his starters — Dodd and forward Jake Layman — had already fouled out, and his team wasn’t “as deep as we are going to be this year.”

Ram’s parents, meanwhile, didn’t see their son’s heroics until they watched a replay on TV later that night. His dad “thought it was a joke.”

“That’s what everybody dreams about — being part of the tournament,” Ram said. “Being able to play was icing on the cake.”