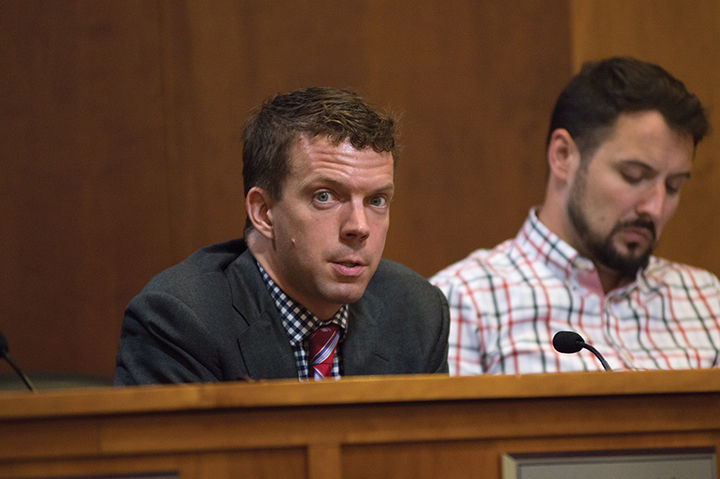 District 1 Councilman Patrick Wojahn announced his candidacy for College Park mayor Thursday, after Mayor Andy Fellows recently announced he would not be running for a fourth term.

Wojahn, who is now in his fourth term on the City Council, said he plans to expand on advancements Fellows made during his tenure, which includes improving the university and city’s interdependent relationship.

“Right now is a historic time in the city in terms of our relationship with the University of Maryland,” Wojahn said. “That partnership with the university could bring many new amenities and raise the quality of life for residents in College Park. We need to make sure we take advantage of that.”

One of the more pressing issues Wojahn looks to address is redevelopment of the College Park Metro station. City Council members, along with county representatives, met with developers at a forum earlier this week to discuss what changes could be made to the station.

Wojahn said working with stakeholders and taking advantage of a valuable transportation asset such as the Metro will stimulate more demand for the city’s services and promote economic growth for local businesses.

“We need to jump on this. This is our opportunity,” he said. “If we don’t see the opportunity where it’s available and take advantage of it, we’re going to miss out and College Park will not become the quality college town it should be.”

A Wisconsin native who moved to College Park 12years ago, Wojahn earned his law degree from Georgetown University in 2002. He currently works as the government relations director at Rails-to-Trails Conservancy, a national nonprofit that converts unused rail corridors into vibrant public spaces.

District 4 Councilman Alan Hew said Wojahn is qualified to become mayor but added that his victory would be a loss to the City Council.

“Patrick has the ability to represent the city well, and he can help us stay the course,” he said. “But we would be losing a really strong councilmember. Win or lose, there’s going to be a hole in District 1.”

Inclusion of residents in city matters is most important to Wojahn who established the Neighborhood Quality of Life committee in 2010 to bridge the gap between students and long-time residents of the city.

Wojahn will kick off his campaign Aug. 1 and said he hopes this race will open a dialogue about College Park’s future. Election Day is Nov. 3.

“I hope for a race that focuses on ways we can improve on College Park and make it a top college town,” said Cole Holocker, City Council student liaison.