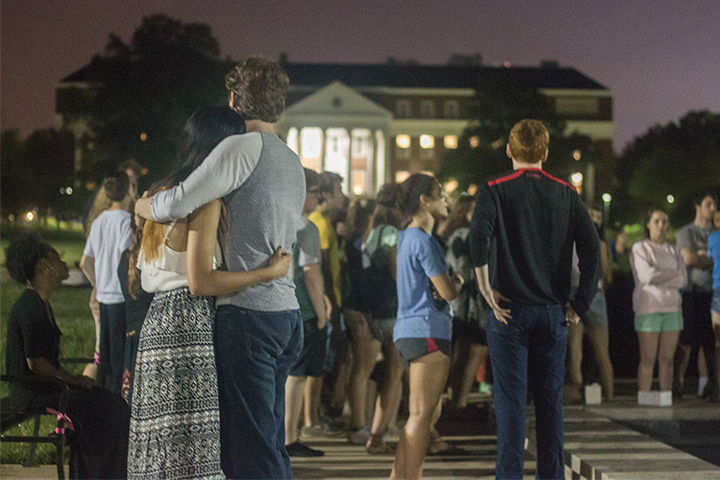 Students are gathered at McKeldin Mall to remember sophomore Lowell Ensel on May 11, 2015.

Students are gathered at McKeldin Mall to remember sophomore Lowell Ensel on May 11, 2015.

Freshman year, sophomore economics major Nazar Bedi and her friends played a game called Lowell-ingo, a combination of bingo and Lowell Ensel’s quirks ­— everything from shouting “Kobe” before he shot anything into the trashcan to his classic dance moves and listening to the same Kanye West songs.

“Lowell is one of a kind in so many ways,” Bedi said Monday night at a memorial for Ensel, a sophomore film studies and government and politics major who died earlier that day.

Paramedics started performing CPR on Ensel upon arriving at the scene and continued for 25 to 30 minutes as they transported him to Washington Adventist Hospital in Takoma Park.

He was still in critical condition upon arriving at the hospital, Brady said. Hoaas said University Police was notified at 2:51 p.m. that Ensel had died.

“The greatest thing about Lowell was his ideas,” said Connor Stapleton, a senior supply chain management major in Ensel’s fraternity and also a Maryland Images campus tour guide with him. “That kid always had a spark.”

In addition to being a fraternity member and Honors Humanities student, Ensel was most importantly a friend, junior government and politics major Natalie Pike said.

“He was the kind of guy who was always looking out for other people,” Pike said. “He was the friendliest person; he was always surrounded by people.”

In reaction to Ensel’s death, about 100 students also gathered in Anne Arundel Hall last night to grieve, while staff from the counseling center and the Department of Resident Life offered to help students cope with their loss.

Pike said she remembers bringing her freshman brother to Ensel at the beginning of the year when he still hadn’t found his place on the campus.

“He was so welcoming even though he never met him, and he told him all about what a fraternity was. … Lowell convinced him to give it a chance, and it’s been his best experience at Maryland,” said Pike, whose brother is now in Beta Theta Pi as well.

Honors Humanities Director Gregory Staley was Ensel’s adviser for the program’s keystone project — a two-year project for which Ensel chose to make a video depicting a typical college night among a group of friends.

“To do what he did, to get eight to 10 students to act roles in a film that they worked on every Thursday night for months was in itself a testimony to his gift for friendship, for making connections,” Staley said. “He lived his life with joy and energy.”

Some of senior Nathan Brandli’s favorite memories with Ensel were singing or chatting in the bathroom of Anne Arundel Hall where Ensel lived with other members of the Honors Humanities program.

“We all have experienced his positivity and friendliness and I’m going to miss him a lot,” said Brandli, an African American studies and government and politics major who was Ensel’s resident advisor. “He’s exactly the type of person this world needs.”