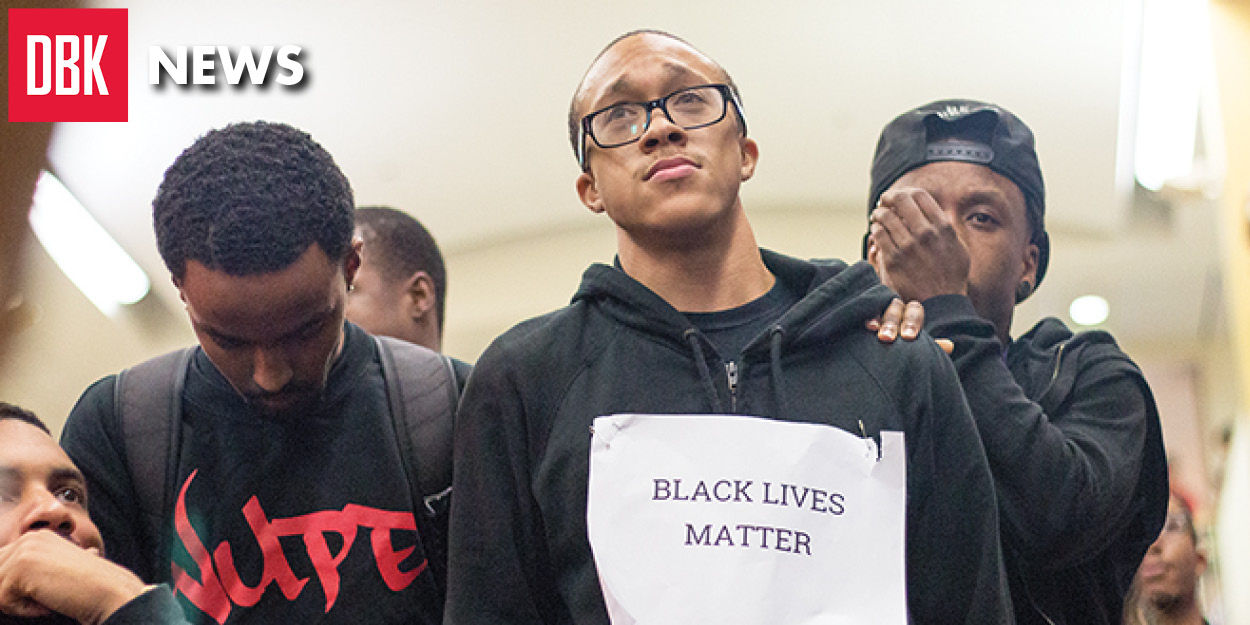 Dressed in an all-black suit, freshman Julian Ivey climbed onto a table in the middle of the cafeteria in Stamp Student Union.

From the tabletop, he led more than 100 student protesters — their arms locked as they formed a human wall around the cafeteria — in four-and-a-half minutes of silence to honor Michael Brown, a black teenager who was shot by white police officer Darren Wilson in Ferguson, Missouri, on Aug. 9.

On Monday afternoon, about 50 students led a march around the campus protesting police militarization in light of the events in Ferguson. Monday night, a St. Louis County grand jury declined to indict Wilson.

This combination of events led students to organize a sit-in at Stamp from 12 to 2:45 p.m. on Tuesday, during which participants gave speeches, led chants and refused to buy food from the nine restaurants in the cafeteria. Their hashtag, #OccupyStamp, was trending in the Washington area.

“This is the most public place on campus,” said junior government and politics major Opeyemi Owoeye. “Stamp is the heart of campus and right now, while we’re hurting, we want to be very visible.”

Senior government and politics major Moriah Ray said the sit-ins will continue for the rest of semester or until the university complies with the students’ demands, including returning weapons that were granted to the University Police through the Defense Department’s 1033 program.

University Police have 16 12-gauge shotguns, 50 M16 rifles, two transport vehicles and a $65,000 armored truck from the 1033 program, which many students said was unnecessary and dangerous.

But this university houses nuclear material for its nuclear engineering program, and University Police are required by law and the Nuclear Regulatory Commission to have such weapons.

“I have spoken with [University Police] Chief [David] Mitchell and we have started to come up with a compromise because these weapons are federally mandated to be on this campus,” Ivey said.

The students also demanded body cameras for police officers, which Mitchell said should be implemented within four weeks, and the creation of a review board including student members to address complaints about police.

Additionally, the group requested that the university administration issue an official statement condemning the murder of Michael Brown.

University President Wallace Loh sent out a university-wide email Tuesday morning “[commending] students for their activism to advance the dialogue on race relations and realize the dream that all persons will be ‘judged not by the color of their skin but by the content of their character.’”

“I proudly stand with them,” the email states.

But this is not enough, Ray said.

“He encouraged conversation, but we don’t just want conversation,” she said. “We want action. These actions will only be taken through civil disobedience. The lines at [Stamp] are a lot shorter today. This will have an economic impact on them. We want more than conversation, we want change.”

Dining Services Senior Associate Director Joe Mullineaux said that all of Stamp’s restaurants pay 10 to 15 percent of their sales to the university. This money goes to offset both the meal plan and student union fees students pay, he said.

“This could cost students a lot of money,” Mullineaux said. “The sales from the food court helps keep student fees lower.”

For some students at the protest, it wasn’t about making an economic mark — they just wanted a place to share their emotions following Monday night’s decision.

“I feel like black lives in America don’t matter,” said Roland Zama, a senior public health student. “This is more than Mike Brown — this is just the case that breaks the dam. While the fire is burning, we need to fuel it.”

Damien Pinkett, a graduate student at George Washington University and alumnus of this university, spent the first hour of the protest lying facedown on Stamp’s floor with a picture of Brown in his hands.

“I wanted to show everyone here a moment,” Pinkett said. “[Brown’s] body laid down on the ground for four-and-a-half hours. That’s what I wanted to show. Someone had to do it.”

Periodically throughout the event, which ran over its intended two hours, the group broke out in chants of “Hands up, don’t shoot,” “No justice, no peace” and “Darren Wilson, you can’t hide, we charge you with homicide.”

Owoeye also read the stories of other black men killed by police, her voice booming throughout the cafeteria without the help of a microphone. After each story, the crowd echoed the slain man’s name: Kendrec McDade, Timothy Russell, Oscar Grant, and on and on.

Many times, students erupted in tears while chanting, their voices breaking with emotion.

The event ended with students being welcomed forward to share their stories, feelings and ideas for change.

One student talked about how, when she was a little girl, her father wouldn’t let her walk her dog after sundown for fear she would be shot.

Another cried out that, although it was 2014, he still felt like three-fifths of a person. He said he was sick of having to tell his friends to text him when they got home, when they were safe.

Another student stood up on a chair and let her scream fill the cafeteria.