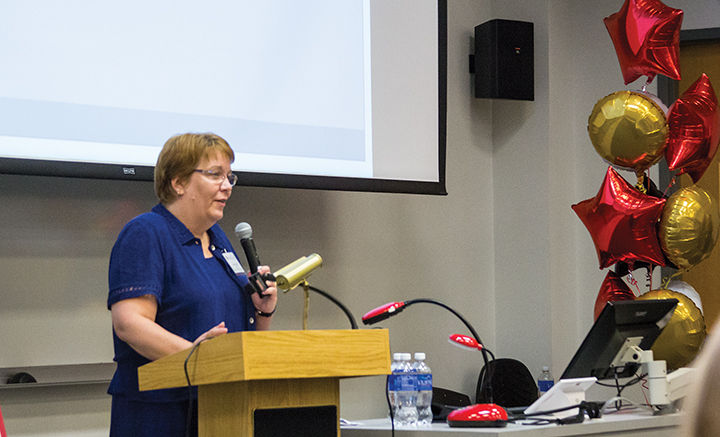 Jan Plane, the director for the Maryland Center for Women in Computing, speaks at the organization's official launch on Friday, Nov. 21.

Jan Plane, the director for the Maryland Center for Women in Computing, speaks at the organization’s official launch on Friday, Nov. 21.

While national statistics show women are underrepresented in computer science employment and education, university officials said they hope to help women become more involved in the field with the resources of a new center.

University officials formally launched the Maryland Center for Women in Computing, which aims to foster a community of women who study computer science at this university, while also conducting outreach to bring a computing appreciation to more young women, at an even† Friday afternoon.

“We’re all aware of the issues,” said Jan Plane, a computer science professor at this university and the MCWIC director. “Computing has some of the most creative and rewarding jobs and they’re really in demand, and yet they suffer from a diversity record that is one of the worst.”

Though women make up nearly half of the job market, 27 percent of computing jobs were held by women in 2011, according to a Census Bureau report.

At this university, less than 15 percent of undergraduates who declared a computer science major were women as of the fall 2014 semester, according to university data.

“But tonight is not about problems,” Plane said. “We’re here to celebrate that so many people care about that issue and are contributing to change that trend.”

A number of speakers spoke to the audience of several dozen students and faculty about the importance of diversity in the computer science field. Brendan Iribe, the CEO of Oculus VR and a former student at this university, made a surprise appearance and promoted the inclusion of women in all computing and virtual reality in particular.

Plane said study lounges for computer science are often filled with men, and it can be intimidating for women to be a minority. Here, she said, women can have their own space.

Samir Khuller, a computer science professor at this university and the department’s chairman, said women in computing do not often get a chance to build a community. But in this lounge, undergraduate and graduate students can gather together and support each other.

“These kinds of interactions are enabled by creating this space,” he said.

Several existing outreach programs will now become a part of MCWIC as well, such as Computer Science Connect and CyberPatriot, camps and educational programs aimed at girls in middle school and high school who are interested in computer science.

“This means more outreach to middle school girls, this means we can increase support and we can build a diverse community,” said Sara Leroy, a senior computer science major.

Erica Lopez-Haz, an eighth-grader at Kenmoor Middle School in Hyattsville, is a member of the Computer Science Connect program, and she said the coding knowledge she learned there has given her the option to continue studying computer science, even if she chooses a different career path.

“Computer Science Connect has taught me a lot,” she said. “There need to be more women in computing, and it’s good to start learning early.”