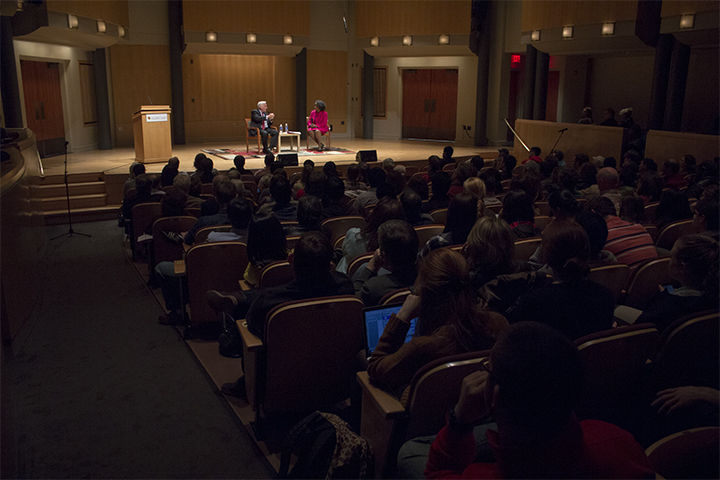 Walter Isaacson, CEO of the Aspen Institute, talks with Sheri Parks about innovation and the future of technology as a part of the College of Arts and Humanities Deans Lecture Series at the Gildenhorn Recital Center on Nov. 11, 2014.

Fusing technology with the humanities is vital to succeeding in the digital era, Aspen Institute CEO and President Walter Isaacson said last night to a nearly full Gildenhorn Recital Hall.

“It’s all about connecting something that makes our heart sing with technology,” Isaacson said. “Very few people can see beauty in both poetry and algorithms. That will be the future.”

Isaacson, in between discussing his newest book, spoke about Albert Einstein, Steve Jobs and Benjamin Franklin as he passionately made his case for creativity in the digital world during the college’s Worldwise Arts and Humanities Dean’s Lecture Series. After the speech, he held a book signing for The Innovators: How a Group of Inventors, Hackers, Geniuses and Geeks Created the Digital Revolution.

But knowing everything doesn’t make one more likely to succeed, Isaacson said, nor does infinite knowledge make a person a genius. After all, he reminded the audience, Steve Jobs was once an arts and humanities student.

“First of all, genius is not pure mind-processing power,” he said. “You could argue that Einstein wasn’t necessarily the smartest physicist of his day, but he was definitely the most creative.”

Junior English and Romance languages double major Cara Reilly was fascinated by Isaacson’s ability to document the life of a genius.

“I read his biography of Steve Jobs and really like it,” Reilly said, “He’s a fascinating man.”

During a Q-and-A session, Isaacson told the audience that the best way to improve the education system in the United States that is consistent with his belief in more collaboration among humanities and math and science departments is through competition and school choice — a view he said others might find controversial. The key is not privatization, he said, just more competition.

“You tend to get innovation and creativity when you have competition,” Isaacson said. “Parents are smart, especially when it comes to their children.”

Senior communications major Tai Coates was delighted with Isaacson’s ability to see through the conventional wisdom on education.

“One thing I really like about Walter Isaacson is the fact that he really encourages for the meshing of the arts and humanities with the sciences,” Coates said. “Some people fail to remember that these things can go together with no problem.”

Isaacson, a former journalist, also weighed in on the current state of the media, which he said has suffered from the rise of blogging and citizen journalism.

“So much of journalism today is just commenting on things,” he said. “People don’t realize how important primary sources are anymore.”

Publications also must embrace technology to thrive in the digital era, as many publications simply throw their print versions of stories online and call it a day, Isaacson said.

“Those [in the media] who will succeed are those who are not afraid of technology,” he said.