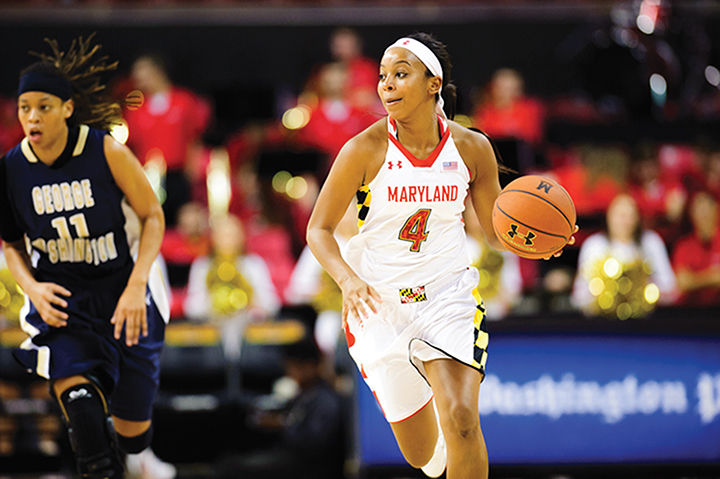 Teary-eyed, Lexie Brown knew it was over.

The then-freshman watched helplessly from the bench, subbed out just moments earlier, as the Terrapins women’s basketball team trailed by 26 points with 37 seconds left in April’s NCAA Final Four game against Notre Dame.

It was an awful feeling — the opposite of the jubilation the team had felt after upsetting No. 1-seed Tennessee and No. 3-seed Louisville en route to their first Final Four appearance since 2006. The No. 4-seed Terps fell to the Fighting Irish, 87-61.

But the season-ending loss soon became a learning experience, one that Brown is taking with her as the Terps enter their first season of Big Ten play. And after logging big minutes in the 2014 NCAA tournament — including a team-high 38 against Notre Dame — the sophomore guard has emerged as what teammates call “a natural leader.”

“She just understands what things to say when we’re going through adversity, and how to get out of it,” center Malina Howard said.

This year’s Terps need that kind of presence. With the loss of mainstays Alicia DeVaughn, Katie Rutan and three-time All-American Alyssa Thomas to graduation, the program is left with a young and relatively inexperienced roster on which guard Laurin Mincy is the only senior.

But unlike Mincy, whom players view as another leader on the team, Brown started 30 games last season. She also is the one player remaining from the last year’s squad who averaged more than 18 minutes per game and started at least 15 contests.

“Lexie has an advantage, just because she has that experience,” guard Chloe Pavlech said.

Brown also comes from a basketball-centric family, which has contributed to her basketball IQ and strong sense of the game, Howard said.

Brown’s father, Dee, was a shooting guard in the NBA from 1990 to 2002, playing for the Boston Celtics, Toronto Raptors and Orlando Magic. He is now an assistant coach for the Sacramento Kings. Brown’s mother, Tammy, played college basketball.

Although the season officially doesn’t start until a Nov. 14 home opener against Mount St. Mary’s, Lexie Brown already is making an impact. Whether pulling teammates aside to give them advice one-on-one or encouraging players who are struggling with a drill during preseason practices, Brown knows how to give people what they need, teammates said.

Freshman guard Kristen Confroy said it helps that Brown can lead by example, too, which helps her feel “so much more comfortable” when the two play together.

“If you need a bucket, Lexie Brown is the girl to go to,” Pavlech said.

Everyone also seems to expect Brown, who finished second on the team last season with 10.1 points per game, to help alleviate the loss of Thomas, the program’s all-time leading scorer who averaged 19 points per contest in 2013-14.

Even Frese has called Brown the leader of the team, who has the right amount of “confidence and that swagger that you would expect from your leader and your point guard,” during media day last week.

Still, Brown said she sees leadership as a “team effort.”

“I’ve already had conversations with coaches that I’m probably going to have to be more of a threat offensively,” she said. “But like, I’m not going to be the only one who has to step up offensively. We have a team that could fill up the stat sheet, and I feel like we can do that.”

Brown said her main goal is to make sure younger players stay confident and that they don’t get down on themselves.

“You can’t avoid mistakes,” Brown said. “The biggest thing I learned is the quicker you get over them, the quicker good things will come to you. And we’re trying really hard to instill that in [the freshmen] early so they don’t hit that wall they can’t get over.”

It’s that mature outlook that makes teammates comfortable with leaning on Brown, and has her gradually adjusting to new pressures and expectations imposed upon her.

“It doesn’t matter what year you are, how old you are — it’s about your knowledge of the game, what you know,” Howard said. “She’s just a natural leader. She’s a person who when she speaks, everyone just listens. She has great things to say, and everyone listens to her.”