Oculus VR founder to give largest donation in university history 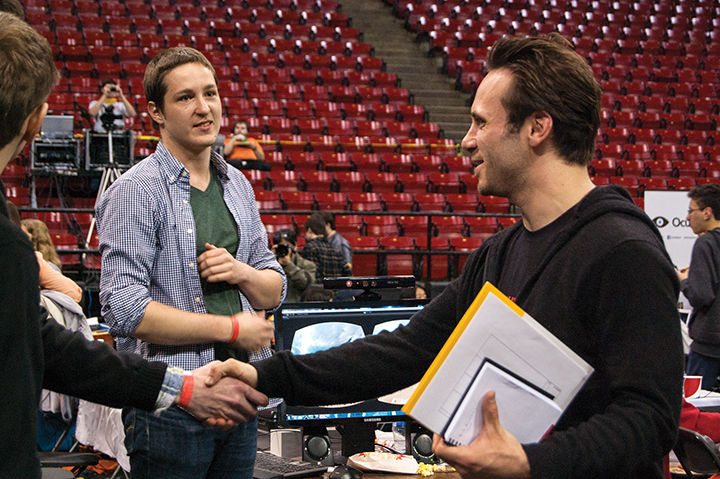 Through the largest gift in this university’s history, former university student and virtual-reality pioneer Brendan Iribe is donating $31 million toward building a new, cutting-edge computer science building and creating a scholarship for the department.

The majority of Iribe’s gift, about $30 million, will go toward the construction of the Brendan Iribe Center for Computer Science and Innovation, which is expected to cost about $140 million and will be located in what is currently a parking lot at the corner of Campus Drive and Paint Branch Drive, university President Wallace Loh said.

The remaining $1 million from the gift will create the Brendan Iribe Scholarship in Computer Science.

Iribe, who attended the university for one semester during his freshman year in 1999, is the CEO and co-founder of Oculus VR, a virtual-reality startup Facebook announced in March that it had reached an agreement to acquire the company for $2 billion. Oculus VR’s virtual-reality product is an immersive science in which a person is transported to another world with a full 3-D view of the surroundings by putting on a headset.

Iribe said he’s eager to see university students creating the future of virtual reality and hopes that the new center will inspire them to get involved.

“If you look up and the name on the building is someone that’s actually out there pioneering the future right now and isn’t somebody you have to read a history book on, I think it’ll make a big difference,” he said.

“[This building] will allow students to get together, to exchange ideas, to create change, to have a wonderful time while doing it, and some of these creations will actually mold innovation and entrepreneurship and very likely become a powerful engine for the economy [and] for the state,” said Jayanth Banavar, the computer, mathematical and natural sciences college dean. “So this new building, through Maryland, will actually transform society.”

Iribe said he envisions using the building to usher in a hub of technology and innovation on the East Coast, similar to how Silicon Valley functions in the West.

“We’re using Silicon Valley as inspiration for the space and building and making it feel like this really current generation engineering facility,” he said. “We should be able to run Oculus inside the Iribe center. This building should be able to accommodate everything Oculus would need.”

“With Oculus VR, we are looking at a tremendous step in vision research and three-dimensional image processing and a lot of things that have been a culmination of research across academic institutions on campus,” Johnson said.

Aside from the physical presence of the new facility on the campus, this university community will reap benefits of having Oculus VR’s virtual-reality technology at its fingertips, Loh said.

Ties to the university

Iribe and Antonov both lived in Denton Hall their freshman year. Antonov’s roommate was Andrew Reisse, another Oculus founder who was killed in a hit-and-run last year. Iribe said Reisse will be the namesake of the new building’s mentoring center.

While on a golf cart tour of the campus last year, Iribe said he noticed the current computer science building looked depressing and not indicative of the exciting changes in the field. So, in a spur-of-the-moment move, he said he announced to Banavar that he wanted to build a new building, with no knowledge of just how much that would cost.

“Sure enough, the budget did end up a lot higher than I originally thought, but those are the types of things that happen on-campus,” Iribe said. “You embark on something, you make a bold, fast decision about something you don’t really know about, and you take the risk and you figure out how to make it work.”

The building Iribe has in mind is nothing like the drab, over-crowded structure that currently exists, he said. The new building will be all about collaboration and open spaces, featuring maker/hacker spaces where students can use resources such as 3-D printers to work on their own projects.

Iribe said he hopes this state-of-the-art facility inspires the next generation of computer scientists.

“If I was still in high school in Maryland and I got a chance to attend a high school computer event or competition at the Iribe Center, I would hope that it completely inspired and blew me away and attracted me to want to come and  be a part of it,” he said. “We’re trying to put ourselves in the students’ shoes: How would we design this to really attract the brightest minds in the world to want to come to the University of Maryland and create the future?”