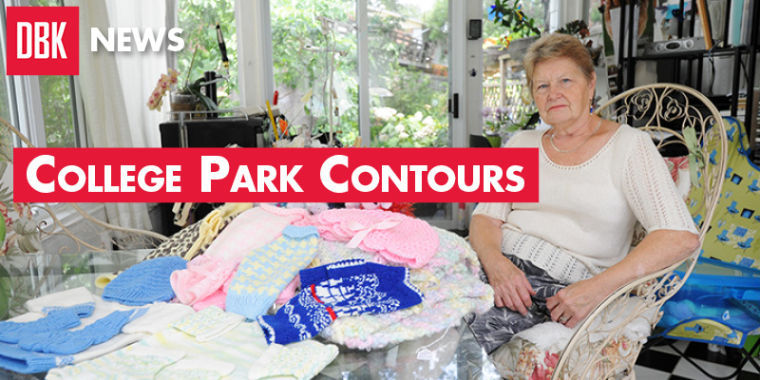 Editor’s note: College Park Contours is a new weekly series spotlighting interesting members of the community. Know someone we should profile? Email suggestions to newsumdbk@gmail.com.

The College Park resident creates and sells special-order dog sweaters and other hand-knitted crafts at the Hollywood Farmers Market through her knitting business, Christiane’s Designs.

“I’ve been knitting all my life,” Williams said. The small-statured, lively woman, who grew up in the Champagne region of France, moved to College Park 47 years ago.

Williams started knitting dog sweaters after selling another one of her products, catnip-stuffed mice, to an Eastern Shore pet store. Later, they asked her to make nautical-themed dog sweaters, inspiring her to expand her business.

Williams began knitting at age 6 and competed with her mother to see who could knit the fastest. She never won, but those moments sparked her passion for knitting.

“I enjoy it. I enjoy creating new things,” she said.

She once owned a knitting store, C.J.W. Designs, but closed it in 1993 due to a lack of business.

But in June of last year, Williams found a new way to sell her creations, and she’s been vending at the farmers market in North College Park since. Williams, now chairwoman of the market, works with the other vendors to support the local community.

“It’s a place to meet people, socialize,” Williams said. “It is really a social hub.”

Customers interested in the sweaters can request one at the market in the Hollywood Shopping Center on Saturdays or through Facebook.

Williams said she enjoys her new home at the market because it not only provides her with more customers, but also is an outlet to display her skills to city residents. And she isn’t stopping at dog sweaters, she said — come fall, cat sweaters will be available, too.