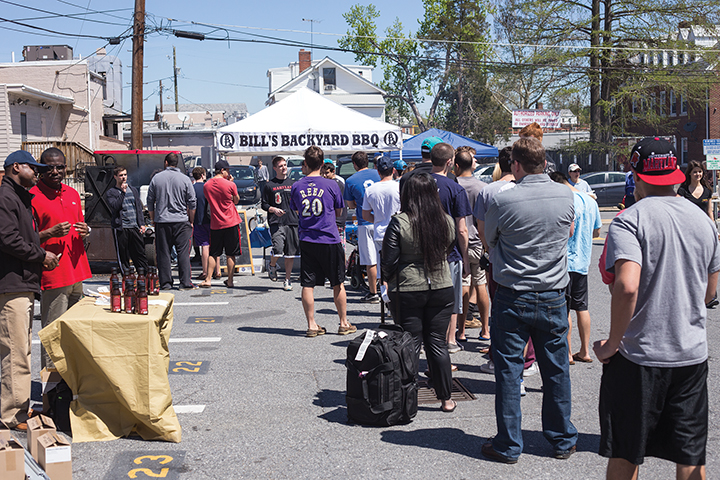 The market, located in the parking lot of College Park's City Hall, opened for the first time this season on Sunday.

The market, located in the parking lot of College Park’s City Hall, opened for the first time this season on Sunday.

Students and College Park residents strolled around the City Hall parking lot in warm weather Sunday morning to the sound of dogs barking and bluegrass music.

This was the beginning of the fourth year of the farmers market, which began in 2010. Vendors and managers said they were pleased with this year’s opening, despite some initial confusion. Only half of the 20 vendors signed up for Sunday’s farmers market showed up, said city Economic Development Coordinator Michael Stiefvater, who recently took on the role of organizing the event.

“There’s a lot of people coming through,” Stiefvater said. “There were some kinks with some vendors not showing, but we’ll get that worked out.”

Stiefvater and Julie Beavers, market manager for the city’s downtown and Hollywood farmers markets, attributed the lack of vendor attendance to a simple mix-up.

Twelve out of 20 vendors are new to the market this year. Last year’s market featured nine groups, eight of which decided to return, and Stiefvater said he worked with the organizing committee to recruit another 12 by contacting more than 80 vendors.

“The person handling the market last year wanted to start with a smaller set of vendors and let the crowd grow first,” Stiefvater wrote in an email. “The farmers market committee and I decided to change this approach and instead expand the number of vendors to provide more products for our customers.”

The City Hall parking lot was large enough to accommodate this growth, and market organizers hope to attract more customers by partnering with several local businesses to offer discounts to those who spend more than $10.

This growth is ideal for Sharon and Tony Morrison, co-owners of Heavenly Created Desserts. Their company has been a part of this market since the bakery was founded about three years ago.

Many market vendors sell their products online and at other farmers markets, but this market is unique because of the “younger crowd” it draws, said Jeff Landow, 34, who is involved with Phil’s Dills Gourmet Pickles, a company that sets up at 15 different markets, including the one on the campus. The company is new to the Downtown College Park Farmers Market this year.

“I love to come on Sundays to get some fresh fruits and vegetables to tie me over for a few days — until Wednesday’s farmers market on campus,” said Phil Marx, a junior mathematics major. “I like to support the local community in College Park.”

Marx also said he enjoys the farmers market because the prices are comparable to those at local grocery stores, but the market is in a much more convenient location for him.

In addition to the different crowd, Nicole Port, 31, co-owner of Grandma Vera’s Bakery, enjoys the “nice vibe” of the market.

Stiefvater and other officials hope to make the market a staple among city residents.

In addition to vendors, some tables and tents offer activities or information about community initiatives. This is meant to draw larger crowds and create a closer-knit community, Stiefvater said.

“A lot of people in College Park don’t like to cross over University Boulevard,” said Peggy Kane, 61, College Park Community Foundation director, as she handed out free doughnuts in hopes of drawing donors or volunteers. “We’re trying to reach out to different sectors of the community.”

For this reason, many vendors at the downtown market are also at the Hollywood Farmers Market in the northeast part of the city on Saturdays.

“The city is very long, and I guess they feel it’s too far,” Kane said.

Despite the geographic difficulties, Stiefvater said he hopes to continue to foster the market’s growth.