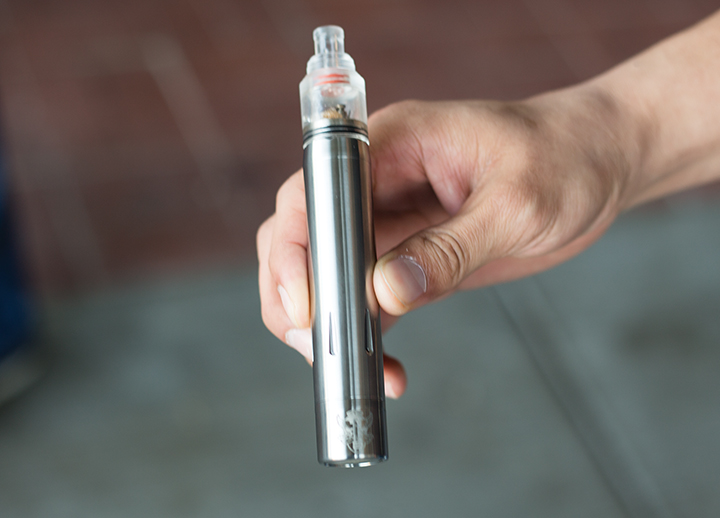 Route 1 is on track to have two new electronic cigarette vendors before the fall, on par with the devices’ increasing popularity statewide.

Such shops have been opening across the state, said Michael Stiefvater, College Park economic development coordinator. He said he’s read that more than 25 e-cigarette shops will open in the state this year.

“I decided to open a location here because it’s close to the university, the younger crowds — College Park is a great city,” Vapin Time store owner Sam Akkad said. “I hope that I can help out everybody in the area that wants to quit smoking.”

E-cigarettes, which come in a variety of shapes and sizes, are smoked like traditional cigarettes. The user inhales through a mouthpiece to trigger a eater, which vaporizes nicotine within a cartridge. When the user exhales, the vapor dissipates.

The products do not contain tobacco, and they’ve been advertised as an option for smokers looking to find a healthier alternative to tobacco smoking.

“You just hit it like a regular cig, and what you blow out is vapor, not smoke, so it doesn’t smell bad and is a lot better for your lungs,” said Richie Gardella, a freshman enrolled in letters and sciences. “You’re still getting nicotine, but it’s healthier than smoking.”

A little more than a mile south of Vapin Time, Vape Exchange will offer a cafe space for customers when it opens in a few months. The College Park location of Wheaton-based DC Vapor will sell e-cigarettes and provide an area similar to a hookah lounge where patrons can use products sold in the store.

The lounge provides a community for friends who enjoy smoking hookah, said Barry Vuong, one of DC Vapor’s co-founders and a university alumnus. Vuong said his friends didn’t have a place to smoke hookah while attending this university. Since the University System of Maryland-wide smoking ban went into effect in July, students have not been permitted to smoke tobacco products on the campus except in designated areas.

“We wanted to bring the vape lifestyle to the area and see how the public reacted — to offer them an alternative to the high prices and health risks of cigarettes and hookah,” Vuong said. “And since there’s no secondhand smoke, anyone who wasn’t interested could still come and hang out and not worry about being affected.”

As the cigarette alternative grows in popularity across the state, lawmakers and officials are debating the risks of using e-cigarettes. The state banned minors from purchasing e-cigarettes in 2012, and a state House of Delegates bill that ultimately received an unfavorable report from the House Economic Matters Committee sought to ban e-cigarettes in places where traditional cigarettes are prohibited.

With the e-cigarette trend also comes skepticism as to whether the new businesses will be sustainable in the long term.

“Since it’s a new market, I wouldn’t expect these businesses to know exactly how large demand is at this time,” Stiefvater said. “That could lead to businesses thinking there is a gap in the market when it might not be large enough to sustain all of these stores.”