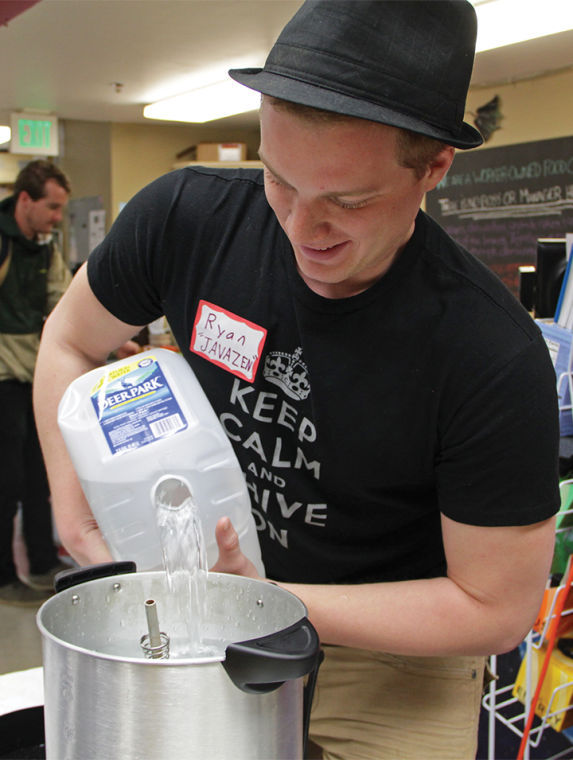 Ryan Schueler pours spring water into the coffee pot in order to brew more coffee in the Co-op in the Stamp Student Union.

Ryan Schueler pours spring water into the coffee pot in order to brew more coffee in the Co-op in the Stamp Student Union.

Four university students brought together by their love of drinking — coffee and tea, that is — were inspired to start their own company and coffee blend.

beverage over the weekend and more than 200 students tasted it at the Maryland Food Co-op on Monday.

“After you drink it, it makes you feel happy — I’ve never had that with a drink before,” said Hannah Whittaker, a sophomore nutrition and food sciences major and a worker-owner at the Co-op. “They did a lot of research and they put a lot of work into it, and you can tell.”

The four students experimented with ingredients before they created Javazen, which contains raw cacao,roasted coffee, matcha green tea, pine pollen and cinnamon, according to their website, drinkjavazen.com. All of the blend’s ingredients are organic and Fair Trade certified.

To create something new, Golman, a junior economics and environmental science and policy major, said he needed to “get innovative.” He started adding raw cacao and noticed a smoother, more chocolaty flavor, but when he added spices to make Mexican hot chocolate, he burnt his tongue from the overly spicy flavor.

He called his roommates Schueler and Green and his friend Wallach and the four conducted some research about cacao, including its history in South America and other ingredients that compliment the bean, before trying more combinations.

“We would just stay up all night just experimenting, planning new methods,“ said Green, a part-time student studying technology entrepreneurship. “Sometimes we would look it up and other times we would say ‘imagine this with cacao.’”

Cacao, a commonly known ingredient of pure chocolate, contains an active stimulant called theobromine, which dilates the blood vessels and allows blood to pump faster. It also contains phenylethylamine, which is the chemical released by the brain when a person is in love and is the reason for the association between chocolate and love.

The coffee, roasted locally in Rockville, provides additional caffeine to the mix. The combination of this roast with the other ingredients is said to provide a less jittery feeling than most people report after drinking plain coffee, per drinkjavazen.com.

Matcha tea is a green tea used by Buddhist monks before meditation because of the “calm-alertness” it provides, according to drinkjavazen.com.

These three ingredients provide the energy, while pine pollen is a natural mood-enhancer and cinnamon adds the slightest bit of unique flavor, Golman said.

“It’s really delicious and there are so many different flavors, and it made my taste buds and my brain very happy,“ said Hally Sablosky, a junior Spanish major who sampled Javazen at the Co-op. “It’s a pretty cool hybrid.“

As students in Hinman CEOs, an entrepreneurship living-learning program, Golman, Wallach, Green and Schueler were able to use funding and other resources to help support their project.

The students said they are passionate about business and superfoods and are excited to share Javazen with other students, who they know often forgo health-consciousness for energy.

“We wanted to create a better energy experience,” Golman said. “Like, right now everyone’s drinking plain coffee and we just think it would be awesome if we can enhance their experience a little more.”