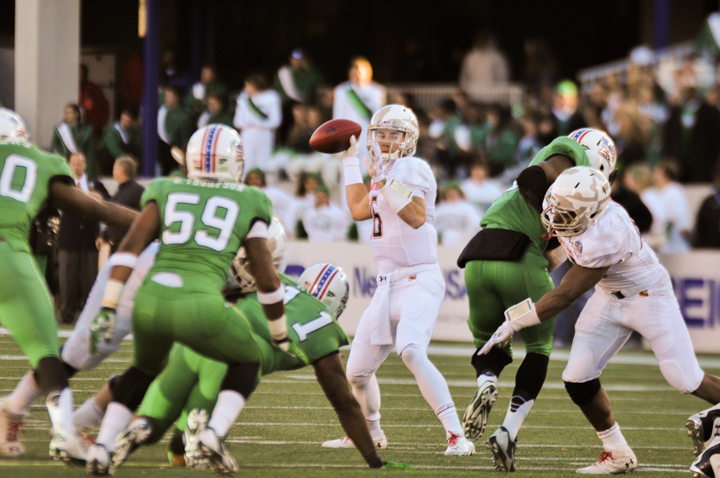 Quarterback C.J. Brown attempts a pass in the Terps' 31-20 loss to Marshall in the Military Bowl on Dec. 27, 2013 at Navy-Marine Corps Memorial Stadium in Annapolis.

Quarterback C.J. Brown attempts a pass in the Terps’ 31-20 loss to Marshall in the Military Bowl on Dec. 27, 2013 at Navy-Marine Corps Memorial Stadium in Annapolis.

ANNAPOLIS — When it was announced the Terrapins football team would be headed about 30 minutes east for the Military Bowl, it was viewed by some as a bit of a disappointment.

After a 4-0 start, the Terps had designs on a more prestigious bowl game or at least something a bit more exotic than the nation’s capital and the state capital as part of the “bowl experience.”

But after Friday’s 31-20 loss to Marshall in the Military Bowl, some of the Terps took the time to reflect on the week and the bowl experience, as only a handful of Terps were around for the Terps’ previous bowl appearance in 2010.

“Our kids had a really good time here this week, and again, I think the whole bowl experience is just great for these young men in terms of what it does for them and the reward for what the they did during the season,” coach Randy Edsall said. “Today was just a beautiful day. The weather was great, and we were just disappointed with the outcome on our end.”

The announced attendance of 30,163 was near capacity for Navy-Marine Corps Memorial Stadium, and it was split between both Terps and Marshall fans. Both sides made their feelings known in reaction to big plays or questionable calls.

“I was very impressed with the support that was out there today in the red,” Edsall said. “Disappointed we couldn’t have a better outcome, but the support was unbelievable.”

The Terps spent the week at the Mayflower Hotel in Washington and participated in team activities like a tour of the Capitol.

“I’m a hometown guy, but at the same time, it still felt like I was away,” defensive end Andre Monroe said. “It was a blessing for the opportunity to be in a bowl, and that alone made the experience great. And just the fact that we were all the people that we love and able to share that moment.”

“I think coming to D.C., it’s a great city in itself,” quarterback C.J. Brown said. “Being in College Park, there’s not so much time to venture down to D.C. for free time. So in itself, we were away staying in the hotel and being with these guys for Christmas and the holiday. It’s just a great bowl experience as a team.”

“We were just glad to be there,” running back Brandon Ross said. “Going through the workouts, summer session, spring ball that’s why we do those things. It was pretty pleasurable bowl site to be in, it was just a good time.”