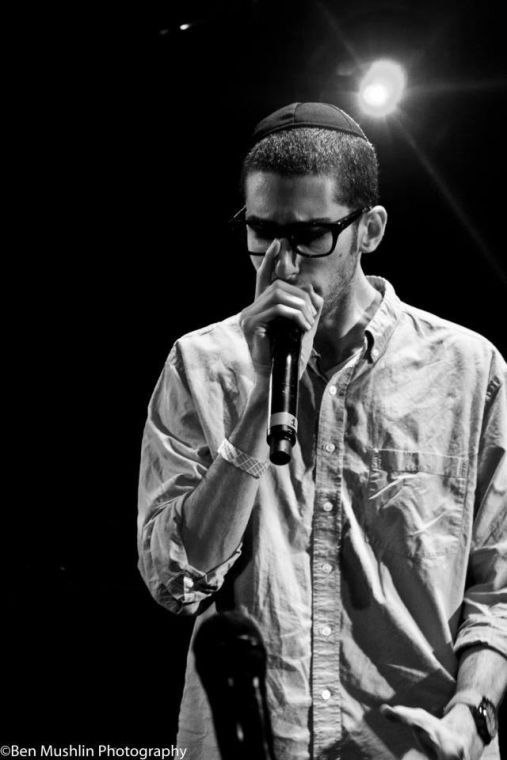 His tall figure towers over the crowd as he leans over the mic and begins his set of beats. The first chunk of his set is a dubstep sound, the next part a cover of a popular song. He closes with a beat that involves a lot of crowd interaction.

Junior aerospace engineering major Josh Leviton’s body sways to the music; his hands move to the beat. He doesn’t look like your average beat-boxer, sporting a pair of simple black pants and an untucked Oxford shirt. Religious tzitzit strings hang from his shirttail, swinging along to the rhythm, and a black velvet kippah sits atop his head. He looks like someone making his way to a synagogue, not a beat-boxing performance.

Leviton, also known as the Orthobox, has been beat boxing for about five years. He began practicing as a sophomore in high school and learned the skill by analyzing how other beat-boxers perform and by watching many YouTube tutorials.

“That was when YouTube became a big part of my life,” he said. “I’m a product of the Internet.”

For three years, Leviton competed in the American Beatbox Championships but never made it to the finals. He was, however, one of the top 16 beat-boxers selected, and he performed in the live battle rounds in New York City.

On the campus, Leviton tries to perform as much as he can. He has beat boxed during halftimes for the a cappella group Rak Shalom and various open mic events but hopes to expand to Washington as well.

Leviton’s beat boxing is guided mostly by his devotion to his faith. As an Orthodox Jew, his religious beliefs play a major part in his music and onstage persona. He said the courage to publicly wear his religion with pride was inspired by Jewish reggae singer Matisyahu.

“Being an Orthodox Jew and dropping beats is pretty inspirational,” Leviton said of Matisyahu. “I saw him as one of the connectors between the two worlds.”

Leviton, who was not always religious, began learning more about Orthodox Judaism in high school.

“The personalities within Jewish culture encapsulated a type of person that I wanted to be, as they related to the world in such a meaningful way,” he said.

These personalities included rabbis, educators and stars like Matisyahu. Leviton was fascinated by Matisyahu’s ability to perform in secular settings yet stay true to his faith. As Leviton matured and developed, both musically and religiously, he looked to Matisyahu as a role model.

Leviton’s stage name, the Orthobox, derives from his affiliation with Orthodox Judaism. At first, he wanted to go by his Hebrew name, Shlomo, but he discovered a beat-boxer from the United Kingdom had already adopted this moniker. One day, the name “Orthobox” spontaneously came to him.

He found that electronica music, dubstep and classic rock also influenced his sound, although the rock inspiration may not be as obvious in his beats.

Music was a part of Leviton’s life throughout his adolescent years. In high school, he played the trombone, baritone and trumpet. He doesn’t play any of these instruments anymore because they’re not easy to transport and “not socially acceptable to play,” he said.

“Our rooms are kind of adjacent to each other, so whenever he is recording something, I hear it through the walls, so I get to do all my work and all my stuff in my room to beats,” said Schwartz, a junior aerospace engineering major.

Leviton said beat boxing is best described as “vocal percussion” but cautioned that the art of beat boxing is tough to communicate through words and needs to be heard to be understood.

“Describing a symphony with words doesn’t really do it justice,” he said.

He makes the sounds by coordinating his vocal cords, lips and tongue. Leviton compared this arrangement to the different components of a drum set; the only difference being that all his sounds come from within and not from an accompanying instrument.

However, Leviton continuously strives for improvement.

“I always look back and say it’s not that good compared to how I feel I can do now,” Leviton said. “Flow or sounds are always developing, maturing, I guess, into the sound I am now.”

Nevertheless, Leviton doesn’t set aside specific times for beat-boxing practices. Instead, he beat boxes whenever he has the free time to do so: to and from class, in the elevator or in the shower.

Kevin Rychik, a sophomore community health major, attests to Leviton’s shower practices. Rychik and Leviton lived on the same floor in Worcester Hall last year. At first, Rychik didn’t know the sounds in the bathroom were Leviton’s beats, but one day after he saw Leviton leave the bathroom, he finally understood what was going on.

“The acoustics were great in the shower, really good,” Rychik said.

Rychik was also impressed that a student on his floor was making a name for himself in the beat-boxing world by entering competitions and performing in shows.

During his time in the 2012 championship, Leviton lost to his opponent Steven “HeaveN” Cantor because of a miscommunication. Leviton explained that it seemed as if two of the judges voted for him, but the emcee accidentally announced Cantor’s name instead. Before anybody was able to sort out the mix-up, Cantor began his next battle and Leviton was eliminated from the competition.

“It is a culture of respect,” Leviton said. “Something I’ve never seen in any other forum where there is a contest involved. As much as it’s a competition and a battle, you can still battle someone and five minutes later jam with them out on the streets of New York City. There is such a community being built.”