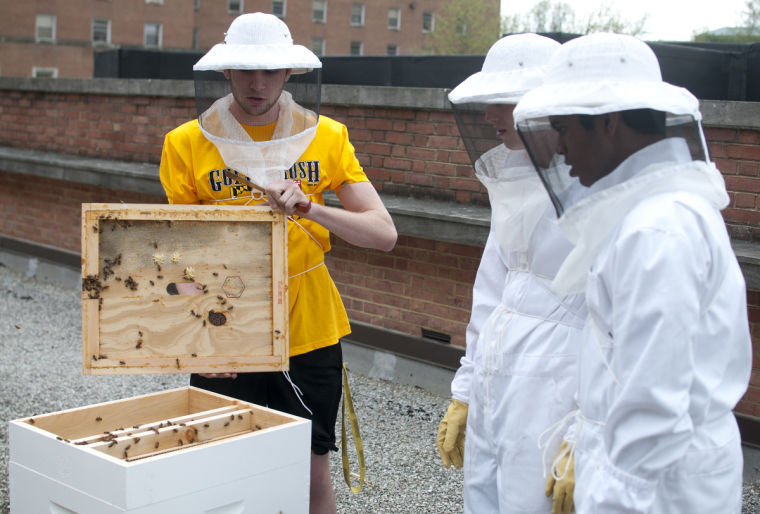 To Andrew Garavito, there’s nothing like opening up a beehive and witnessing thousands of workers carrying out their perfectly timed dance.

“Each bee has a job, and when you open a hive, you can see them all working; it’s really cool,” said Garavito, a research assistant who helps out at the university’s apiary. “You might think it would be scary to open up a hive if you have never done it before, but once you get into it, it can be very relaxing and enjoyable.”

The beekeeping club has rapidly grown in popularity on the campus, and with the help of a $9,600 grant from the Sustainability Fund, members are working toward expanding the university’s fragile colony. After surviving the winter, the apiary’s bees are thriving and will soon be joined by eight more hives, putting the group one step closer to producing enough honey to sustain the club.

Students are also hard at work building and painting equipment they will use in “beeminars,” seminars in which students will learn how to keep bees and maintain the hives. After establishing the new hives, the apiary will eventually begin dividing them each year.

“Once we build our numbers, we plan on putting aside some hives for research,” Arata said. “Hopefully the entomology department can use this, including the grad students, for experiments.”

Students frequently see Arata with beekeeping equipment on the roof of 251 North and become curious. He then uses that curiosity to educate students about the apiary and the true nature and benefits of bees — a source of anxiety for many.

“I’ve had people come to the ‘beeminar’ who are afraid of bees, and once they leave, they’re not afraid of bees anymore,” he said. “They’re actually more curious about them.”

By reaching out to the local beekeeping community — including the White House’s beekeeper — Arata has been working to build connections in the hope that someday, local beekeepers will come to the university to use its equipment, including expensive extractors most individual beekeepers cannot afford. The apiary could also potentially help students start their own bee farms in their homes once they graduate, he added.

“We want to become a source of support for the beekeeping community,” Arata said. “Eight hives isn’t that much, but this is growing.”

Some students, like Jason Rubin, became involved with the apiary after learning what bees contribute to the environment. In 2007, beekeepers nationally began experiencing what researchers call “colony collapse disorder,” or a dramatic loss in colonies, according to a report in The New York Times. Some farmers found half of their bees missing, presumably dead after they ventured out for food and pollen and never returned.

Not only do bees create honey, they also help farmers in the production of a host of foods, from almonds and avocados to broccoli and squash. Yet between 2006 and 2007, colony collapse disorder killed about a third of the country’s honey bees, according to the USDA, and the losses continued the next winter worldwide. About $15 billion worth of produce in the United States would not be possible without pollinators such as bees, according to a 2009 report by EatingWell Magazine.

“I’m a big advocate for sustainability and green environmental initiatives, and at first, I didn’t think much of beekeeping,” said Rubin, a freshman computer science major. “I thought it was for people that just liked playing with insects.”

After helping open up a beehive and handling the drone of thousands of bees, freshman computer science and finance major Praneet Puppala said he learned to appreciate rather than fear the creatures. And with the apiary’s expanding activities, more students will have opportunities to turn their anxiety around.

“Once students learn more about beekeeping, what it consists of and its positive effect on the environment, they will be interested,” Rubin said. “The apiary will pull students in because of its distinctiveness.”