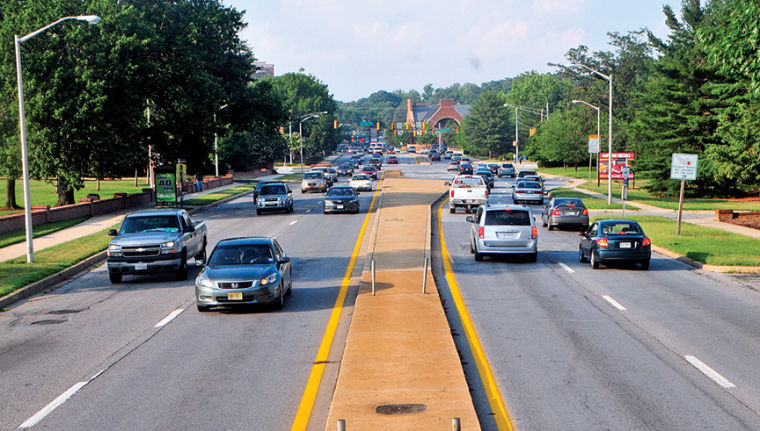 Route 1 is infamous for its crawling traffic, students and business owners say, though the number of vehicles on the road has declined since 2003.

Route 1 is infamous for its crawling traffic, students and business owners say, though the number of vehicles on the road has declined since 2003.

Yasmine Eshera often runs into her morning classes 30 minutes late — but not because she hits the snooze button too many times.

While the freshman bioengineering major leaves her Clarksville house at 8 a.m., she frequently doesn’t arrive at school until 9:15 or 9:30, though the trip takes only a half-hour on clear roads. Eshera is one of thousands of commuters who have to face the almost unbearable crawl of bumper-to-bumper traffic on Route 1 twice every day, often making them late for classes because they spend hours on the road. Though average daily traffic has actually lessened in the past decade, the College Park City Council and State Highway Administration have plans to reconstruct Route 1 in the next several years in the hope of providing some relief.

But until then, traffic near the university is “ridiculous,” “frustrating” and “annoying,” commuters said.

“Most of my classes start at 9, so if I get there at 9:30, there’s only 20 minutes left of class, so sometimes there’s no point in going,” Eshera said. “And one time I missed a meeting that was at 9 and had to reschedule it.”

In 2012, an average of 49,662 vehicles passed the intersection of Route 1 and Route 193 every day, according to the State Highway Administration. Near the university’s Route 1 entrance and downtown College Park, 35,500 vehicles drove past.

But that’s actually a slight decrease from last year and a substantial drop from a decade ago, according to the SHA. Traffic volume increased between 2006 and 2011, but in 2003, an average of 51,925 vehicles passed the Route 193 intersection daily.

Ifeanyi Uzoukwu, a junior English major, said construction on Route 193 and vehicles stopping in front of University View still contribute to bringing traffic to a crawl. The speed camera near Rita’s Italian Ice worsens the slowdown, Eshera said. And freshman Kadija Kamus, who’s enrolled in letters and sciences, said it can take more than 10 minutes to move past a certain point on Riggs Road solely because of cars merging into her lane.

Coming from Montgomery County, it takes Kamus about 25 minutes to get to school at a “good time” and about 35 minutes at a “bad time,” she said.

“If I have a class at 10, I shouldn’t have to leave my house at 8. It’s not that far from College Park,” Uzoukwu said. “I always walk in feeling a little bit embarrassed because everyone else in the class sees me come in 15, 20 minutes late, and there’s nothing I can do about it.”

“They don’t want to sit in the car and not get anywhere,” Callahan said.

Something must be done, said city councilman Fazlul Kabir. The city population is increasing — there were about 5,800 more residents in 2010 than in 2000, according to the U.S. Census Bureau — and more people are driving along Route 1 to get to newer attractions such as the Hyattsville arts district.

The State Highway Administration is planning a project that would reconstruct all of Route 1 from Interstate 95 to College Avenue, said SHA spokesman David Buck. The proposed project would transform the road into four lanes with a middle median and sidewalk and bicycle lanes on the sides, rather than the current five-lane road with a center turn lane.

Though project planning began in 1998, the administration only got design approval for the first phase of the three-part project — between Route 193 and College Avenue — in February 2012. These plans will hopefully be finished in 2015, Buck said.

Constructing the first phase, as well as beginning the other two, would require $150 million to $200 million more than the $10.1 million currently secured. But with the recently passed gas tax, more money will be available, Buck said.

To help alleviate traffic, the city council recently introduced the Route 1 Ride, an extensive bus service with stops from IKEA to south College Park, Kabir said. The city council will also establish a Capital Bikeshare program through which residents can rent bicycles and return them to any of the system’s stations around the city.

Other suggestions include better-synchronized traffic lights, so drivers aren’t constantly stopped by red lights, and “superstop” areas for public transit buses so they don’t block the main traffic flow. But this would depend on negotiations with private property owners, Kabir said.

The city also hopes to increase awareness of routes other than Route 1, Kabir said.

“For example, to get to UMD or downtown from the Beltway, you don’t really need to take Route 1; you can take Kenilworth [Avenue],” he said. “Many people don’t know. When they think of coming to UMD, they think Route 1 is the only way to take it. But that actually takes longer.”

Encouraging more staff to live in the city, rather than commuting, would also improve traffic, Kabir said. About 50 percent of city workers commute alone, based on 2007 to 2011 Census Bureau estimates. Only about 9 percent carpool, 12 percent use public transportation and 21 percent walk.

This year, the university hopes to create a housing inventory, which would arrange cheaper housing options for faculty in the city.

The traffic problem is personal for Kabir: He lives in north College Park and said he should be able to get to evening council meetings at City Hall in less than 10 minutes. But he has to leave a half-hour beforehand.

“It’s a pain to get to UMD or downtown from the Beltway,” he said. “It’s only less than two miles, and it shouldn’t take that long.”

“I just hate traffic,” she said. “Rush hour around here is absolutely horrific.”