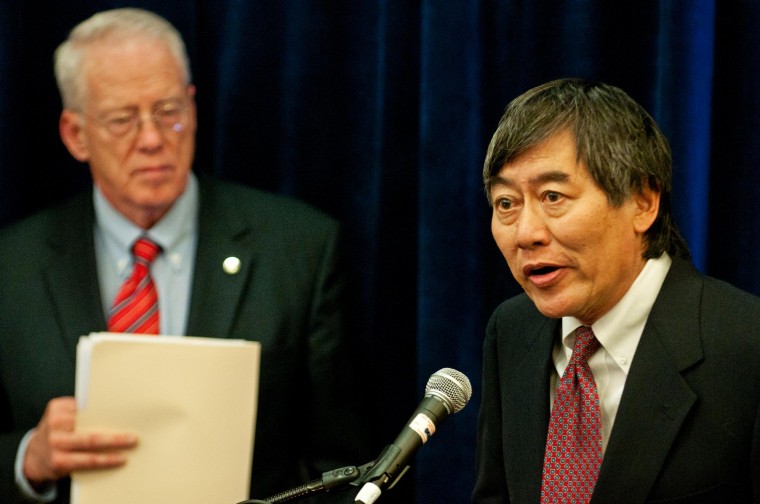 While university President Wallace Loh advocated for a merger between this university and the University of Maryland, Baltimore, the Board of Regents entered into a “strategic alliance” between the two institutions.

While university President Wallace Loh advocated for a merger between this university and the University of Maryland, Baltimore, the Board of Regents entered into a “strategic alliance” between the two institutions.

In hindsight, collaborating with the University of Maryland, Baltimore, made perfect sense to university President Wallace Loh.

When engineers at this university learned of a Baltimore neurosurgeon’s struggle to operate on sensitive parts of the brain, they designed a tiny robot to maneuver around more precisely than instruments held by a human hand during surgery — something Loh said never would have happened if the neurosurgeon and robotic engineers had not met. Now, one year into the partnership, the universities have launched a collaborative public health school, developed a joint biomedical informatics and bioimaging center and created a research and innovation program.

“When you have a formal structure for a partnership and encourage people to talk to each other, this is what the partnership between the universities is all about,” Loh said. “They have the problems; we have the solutions.”

State officials first proposed the University System of Maryland study a potential merger between this university and UMB in March 2011. The idea led Loh, UMB President Jay Perman and university system Chancellor Brit Kirwan to develop MPowering the State, an educational, research and entrepreneurial alliance between the two institutions.

“The successes in just one year are quite remarkable,” Loh said. “No university has enough people, enough resources, to do everything on their own. You have to partner with others. The world of the future is all about partnerships.”

The university held a public health event Thursday to showcase research projects developed by students and faculty from this university and UMB to display the potential of a collaborative public health school.

“Together, we seek to enhance the size and capacity of the state’s public health workforce, conduct innovative and interdisciplinary and cutting-edge research that translates directly into achievements in the science and practice of public health,” Jane Clark, this university’s public health school dean, told the audience.

“It makes very little sense to have a school of medicine in Baltimore and a school of public health in College Park that don’t work together to magnify the impact of combining their resources,” Loh said. “Why go out and hire new faculty members when our students can simply commute to Baltimore to take those classes, or they can commute from Baltimore to College Park?”

“Our ability to bring the diverse strengths over two campuses together to address the various complex biological, psychological, sociological problems is truly our best hope of solving these problems,” Reece said.

Perman, who practices medicine as a pediatric gastroenterologist, added the collaboration could lead to a better overall approach to health care.

“There are many issues that are brought to bear on the patient and the patient’s family, which need public health research, which need public health scholarship, so that I can have a better impact at the individual level,” Perman told the audience. “That, to me, as I continue to have the privilege to deliver health care, is what is so important about your work and about this coming together to enrich the education that we offer and to better enable those of us at the individual level to be impactful.”

But while administrators and faculty from both institutions praised the collaboration’s accomplishments, some students said they have yet to notice an impact.

Kinesiology majors Danielle Kauffman and Brooks Leitner presented their research on the potential of exercise to prevent future emotional stress at last week’s public health research fair. While both said they were excited about the university’s collaboration with UMB, neither completely understood how it works.

“I wish we were made a little more aware of the opportunities,” Leitner said. “I’m not exactly sure how we’ll benefit from the collaboration.”

Through the partnership, Loh said, the universities have already integrated their technology commercialization efforts through UM Ventures, a research and innovation program, with the ultimate goal of converting research into commercial products or services.

“These advances show just how powerful this collaboration can be, and bodes well for the difference MPowering the State will make in the years to come,” Kirwan said in a statement.

With the launch of UM Ventures, the institutions have already seen a drastic increase in inventions and the launch of university-based businesses, said Alex Likowski, UMB media relations director.

More research institutions are also offering grants for research conducted on the two campuses, Likowski said. The National Institutes of Health granted the surgical robot team about $2 million to develop the robot used in brain surgeries, and a joint Research and Innovation Seed Grant Program has resulted in about $6 million in grants.

Researchers from both institutions are using bioinformatics — sophisticated and large-scale computation — to solve medical problems. The future of medicine, Loh said, will involve treating an illness or disease based on an individual’s genes. Through genetic and biological research at the Baltimore campus and computational research on this campus, the Center for Bioinformatics is bringing together this concept of personalized medicine.

“The whole idea is basically the marriage of computers with science,” Loh said. “The future of medicine is computers. You need the power of computers to diagnose these diseases.”

The partnership will expand further within the next year, officials from both universities said, as students and faculty from the two campuses engage in more joint research.

“The opportunity to bring our students together also serves a great catalyst — a catalyst for a research endeavor, as we’re seeing today, by bringing together so many people around public health research,” said Jay Magaziner, chair of the epidemiology and preventative medicine department at UMB’s medical school.