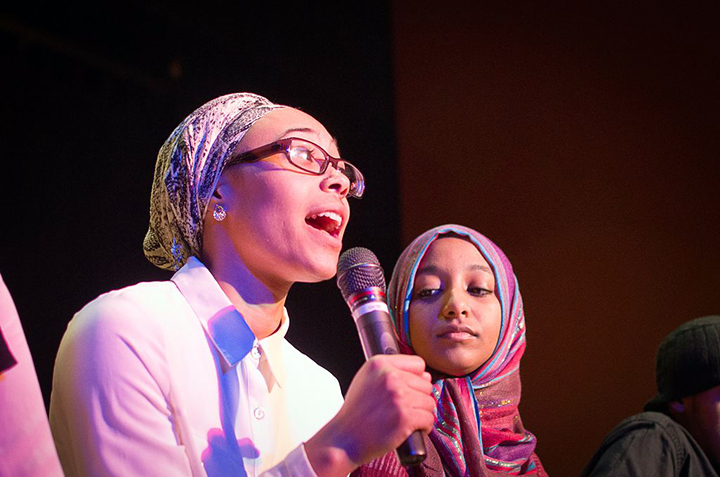 Anisah Imani shares her story as one of nine students in the Muslim Student Association’s first Muslim Monologues. Students talked about their religious experiences through poetry and narratives on Friday.

Standing on the stage in Hoff Theater, Hannibal Kokayi recounted a train ride in which a vagrant-looking man interrupted him while he was reading the Quran.

He’d been focusing on the book and avoiding eye contact with the stranger, but once the man stopped him to ask about the Quran’s teachings, Kokayi found himself regretting his own arrogance. Through his enlightening conversation with the man, he realized he still had much to learn from others, Kokayi said, reading from his poem and revealing a side of himself he normally keeps hidden.

“That’s the good thing about performing — you’re vulnerable,” said Kokayi, a University of Maryland University College student. “They get a greater understanding of who you are.”

Kokayi joined eight other Muslim students in Stamp Student Union on Friday afternoon to share their religious experiences through poetry and narratives in the Muslim Students Association’s first Muslim Monologues. Between decades of conflicts brewing in the Middle East and cultural stereotypes, it’s not easy being Muslim in the United States, students explained.

The culmination of an initiative led by the MSA, the event allowed students to address different aspects of their Muslim identities. They expressed sentiments of love and heartbreak, of identity conflicts, of stereotypes and of accepting the teachings of their religion — all with the hope of showing they weren’t as different as society often portrays them to be.

To jump-start the event, the MSA set up a Tumblr page about a month ago entitled “The Muslim Monologues,” encouraging students to anonymously submit their confessions about and experiences with being Muslim.

“It’s this need to identify ourselves and others that has put me in conflict with those around me,” said Tolga Keskinoglu, a sophomore business major who discussed what it was like to be Turkish-American. “I found myself constantly defending my other identity, defending Muslims as not all violent and United States-hating in the United States, but the exact opposite in Turkey — not every American is from Texas and wants to dominate.”

Each performer had a different story, a different background. Some grew up in devout Muslim families ,while others, like senior communication major Zane Adoum, had parents who practiced different religions. Zahin Hasan, who attended George Washington University, had to accept and embrace the religion on his own, without much direction from his family — a story he told through a poem written in the rhyming style of Dr. Seuss.

Some came from sheltered backgrounds, and others carried with them harsher experiences.

Anisah Imani described growing up in an urban Muslim community in Baltimore. She discussed gang issues and recalled how fellow Muslims fell prey to drug addiction and alcohol abuse, swept under the rug by the beliefs of Islam — a hypocrisy she found disturbing.

“It’s when we create these dichotomies — it’s you, not me — that we create barriers to the issues addressing us,” said Imani, a senior anthropology major. “We exile people to the battlefield, and in some screwed-up way, we still expect them to come back victorious.”

“It made me feel pathetic,” said Naeem Baig, a senior at Al-Huda School in College Park who read a poem about the hypocrisy he saw in himself. “A lot of people like to point out other’s flaws, and when I was writing this, I had to spend time pointing the finger at myself.”

The chance to share experiences and connect with others facing similar challenges brought tears to both performers and audience members in a painful but cathartic experience.

“That’s what the shared experience is: You’re bringing in someone to share your pain, and you can heal together,” said performer Muneer Zuhurudeen, a senior mechanical engineering major, in a discussion session following the performance. “Realizing that was what I needed more of made me say yes [to speaking].”

Muslim members of the audience joined performers on the stage prior to start of the event and performed sunset prayers, creating an intimate atmosphere to the event.

The monologues extended beyond the Muslim community in the area and on the campus— curious students, such as Samantha Krahling, said they were moved by the performances and came away with a new understanding of the Muslim culture.

“It was a good way to get a cross-cultural perspective,” said Krahling, a freshman enrolled in letters and sciences. “I knew basic things, but I didn’t know about the cultural practices, like prayer and some of the issues with their identity and being ashamed or nervous to associate themselves with the religion, [maybe because of] racism they face.”