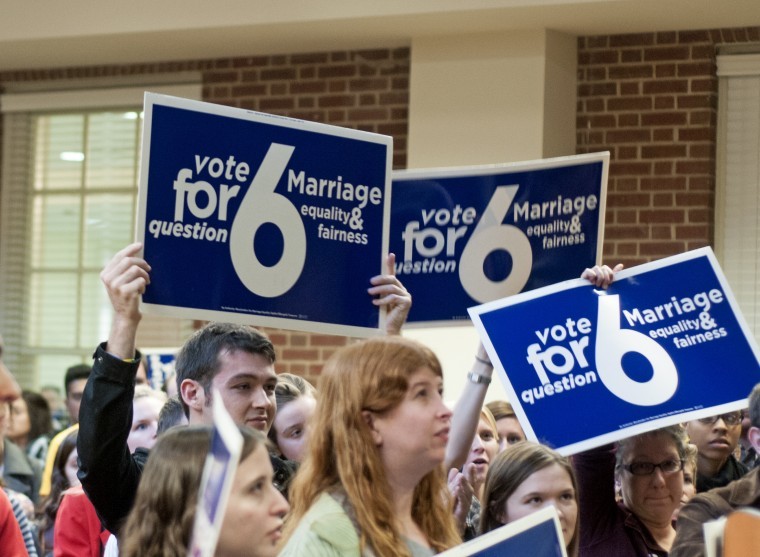 Students rally on the campus one last time in support of marriage equality on Monday. Voters upheld same-sex marriage, Question 6 on the state ballot, Tuesday night.

Students rally on the campus one last time in support of marriage equality on Monday. Voters upheld same-sex marriage, Question 6 on the state ballot, Tuesday night.

Voters upheld same-sex marriage on the state’s ballot yesterday, making Maryland the first state to do so after 32 others turned it down and eight months after Gov. Martin O’Malley signed marriage equality into law.

More than 51 percent of voters supported the measure to grant gay and lesbian couples the right to marry, upholding the law by a slim margin as of 1:30 a.m. Similar questions appeared on the ballots of Maine and Washington state and Minnesota’s state ballot included a referendum to define marriage as between a man and a woman.

Though Republican lawmakers successfully garnered enough support to place the issue before voters in June, yesterday’s vote culminates a years-long battle to knock down the state’s statutory ban on same-sex marriage. Many speculated Maryland voters would push the law through after several polls showed it had considerable support from residents.

Across the campus, students watching from their dorm rooms, apartments and election parties expressed their relief and joy with the results. Kelly Lowe, a sophomore enrolled in letters and sciences who spent hours each week this semester rallying support for the cause, said it was terrifying to watch the numbers come in and try to determine whether or not the referendum would pass. But seeing her dream realized, Lowe said, was incredibly gratifying.

“It’s fantastic. It’s so exciting that I can actually say that our state supports equal rights for everyone and not just a certain group of people,” Lowe said. “It makes me happy to look at my friends and say I worked for your equal rights. It makes my heart explode.”

“If it does end up passing, I probably am just going to get all my drag queen friends together, go around campus and just celebrate,” Lowe added while watching results last night. “Take a victory lap.”

Many state officials praised the outcome, one they’d worked for months to achieve.

With this state becoming the first to pass marriage equality in a popular vote, the state shows it embraces equality under the law, said Rep. Ben Barnes (D-Anne Arundel and Prince George’s), who was a primary sponsor for the marriage equality bill.

“With every passing generation, we get closer and closer to that more perfect union that our founders challenged us to be,” Barnes said. “We should be proud of the state and proud of the people in our state. I’m elated and joyous for the families that this will impact.”

The “genuinely historic” vote shows the legislature accurately represents public opinion, said Sen. Jim Rosapepe (D-Prince George’s and Anne Arundel). “The legislature made a decision that the people of the state upheld when given the opportunity.”

“We are for all,” O’Malley said. “That’s what it means to be an American. Our diversity is our strength, and there’s no state that epitomizes this better than the state of Maryland. … That is allowing everyone to have a fair shot and a fair say — and that means equal pay for women and also marriage equality.”

Across the campus, students watched in groups, many of them after returning from the polls on the campus to cast their ballot for Question 6.

“One of the main reasons I’m here is to support the LGBT community,” said Jazmin Henriquez, a freshman communication major voting at Stamp Student Union. “They should have the same rights that heterosexual couples have.”

Cementing the right to marry for lesbian and gay couples marks a victory for equality and progress in this state, said Maryland Attorney General Doug Gansler.

Additionally, the U.S. Supreme Court may take up the 9th Circuit Court of Appeals case that ruled California’s same-sex marriage ban unconstitutional. If the nation’s highest court were to then rule in favor of same-sex marriage, it would trump all decisions of the lower courts. Inevitably, all states will recognize same-sex marriages one way or another, Gansler said.

“There will be marriage equality in every state in the country, whether it’s in the next year or certainly within the next five years,” he said.

Despite the efforts of local officials and student leaders on the campus, about 49 percent of voters retained opposition to same-sex marriage. Taylor Johnson, a sophomore journalism major, voted in favor of the DREAM Act and President Barack Obama, reflecting her support for college affordability and increased resources for women’s health. However, Johnson said she made the choice not to support same-sex marriage.

“I am voting in this election because I feel it’s very important for me to be able to exercise my right,” she said. “I voted no for Question 6 but that’s just my personal view.”

Junior marketing and psychology major Kevin Hollander watched the election with his family in Baltimore at a Marylanders for Marriage Equality viewing party. Above attendees heads were balloons set to fall should the referendum pass — but with the results still so close, they remained in place.

“I think was really could have pushed it through was the students,” Hollander said. “We activated a lot of students on campus, having a lot of people come speak, seeing a lot of demonstrations, and we were really happy that we were able to get the young people to come out and vote. … We’re hopeful and ready for it to pass. I’m crossing my fingers.”