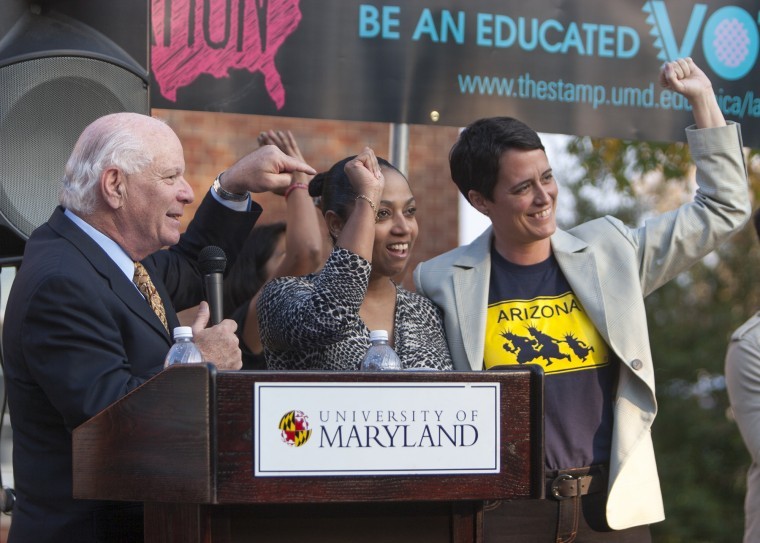 Senator Ben Cardin and state delegates Joseline Peña-Melnyk and Heather Mizeur, along with more than 250 supporters, gathered on the campus Oct. 25 to rally for the DREAM Act.

Senator Ben Cardin and state delegates Joseline Peña-Melnyk and Heather Mizeur, along with more than 250 supporters, gathered on the campus Oct. 25 to rally for the DREAM Act.

Jose Aguiluz, a 23-year-old undocumented immigrant from Silver Spring, advocates for the Maryland DREAM Act so he can see his younger brothers, Angel and Josue, become Terps —  an opportunity he never had.

With the passage of the act, Angel could play clarinet in the university’s marching band. Josue could pursue an accounting career.

“I want my brothers to have a shot to accomplish their dreams and to get the education that they deserve,” Aguiluz said.

Decked out in “I have a DREAM” and “I am the Maryland DREAM Act” shirts, a crowd of more than 250 students and supporters joined Aguiluz and other undocumented immigrants to declare their support for the act Thursday evening, filling Nyumburu Amphitheater with chants of “si se puede” and “undocumented, unafraid.”

“My character is not defined by my immigration status,” said CASA de Maryland organizing director Gustavo Andrade, who moved from Brazil to the United States at age 14. “It never has been. It never will be. My character is defined by my actions and what I do. That’s what matters.”

Peña-Melnyk, who immigrated to the U.S. from the Dominican Republic, said becoming the first in her family to attend college made her recognize the value of a U.S. education, adding she wouldn’t have had the same opportunities if she had stayed in her home country.

“It doesn’t make sense not to vote for Question 4,” she said. “Why would you want to create a society that is not educated? We must be educated so that we can be successful.”

After Gov. Martin O’Malley signed a law that would let undocumented immigrants pay in-state tuition if they met certain guidelines in May 2011, a Republican-backed petition garnered more than 100,000 signatures to bring the issue to referendum in the Nov. 6 election.

But 59 percent of likely voters in the state support the referendum, according to a poll published Oct. 18 in The Washington Post.

“The polls look great, but guess what — the polls don’t vote,” Peña-Melnyk said.

If the act passes, undocumented immigrant students will be eligible to pay in-state tuition at a four-year institution if they have attended three or more years at a state high school, earned a high school diploma and 60 credits or an associate’s degree at a community college, and can prove their parents or guardians have paid state income taxes for at least three years.

Seniors Paola Cabello-Henry and Karen Guzman of the Lambda Theta Alpha Latin Sorority, Inc., decided last June to organize the rally to clear up misconceptions about the act and raise awareness among groups not directly affected by it.

“This has always been portrayed as a Latino issue, so we strived to have so many different organizations come out,” said Guzman, a psychology and sociology major. “Having the diversity scene in today’s crowd shows us that it’s not just a Latino issue — it’s an issue for anyone who came from another country.”

The passage of the DREAM Act would mean equality on a higher level, said Yerodin Anthony, a junior anthropology major who emigrated from Guyana when he was 9 years old. Anthony said he wants to see his friends from Langley Park have the same job opportunities he has as a student at this university.

Mizeur, wearing a shirt that read “No human is illegal” under her blazer, said voting for the DREAM Act means standing up for the rights of all “Marylander Dreamers.”

“They grow up in our neighborhoods, they play in our playgrounds, they go to our public schools,” she said. “We understand the grand bargain that exists that when you go to a Maryland school and your parents are paying Maryland taxes, you should pay an in-state rate at Maryland colleges.”

Last month, the Student Government Association passed a resolution supporting the DREAM Act, and university President Wallace Loh publicly announced his support of the act in an op-ed for The Post.

“I think that’s really indicative of how much he really wants to see this passed,” SGA Communications Director Matt Arnstine said. “The administration has been really supportive of the DREAM Act — and we’ve seen it. The administration is really taking leadership on an issue that affects students.”

Some rally attendees said knowing other voters are willing to give undocumented immigrants a voice makes them hopeful the act will pass on Election Day.

“I don’t have a voice in this election … But these people are showing support for this issue, showing they value education regardless of your background or legal status,” said Aguiluz.