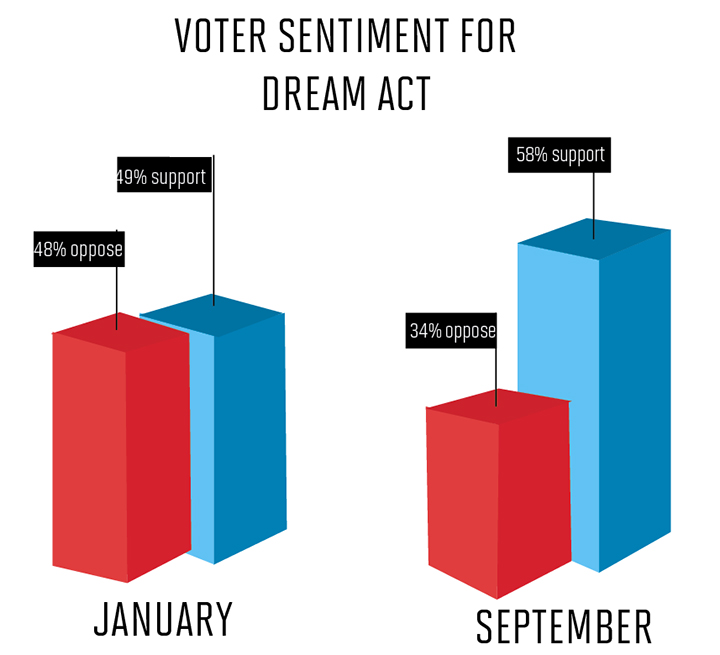 DREAM Act supporters have gained momentum in their campaign to extend in-state tuition rates to undocumented students, according to three polls released in the past two weeks.

State voters overwhelmingly support the ballot initiative, the polls suggest — an average of 60 percent of those asked favored the legislation while about 30 percent opposed it. In January, 48 percent supported the state DREAM Act and 49 percent opposed it, according to a poll by Gonzales Research & Marketing Strategies. With the language for the ballot question fully fleshed out and ready to go, state voters are learning more about what the law will do as it builds a stronger base of support, said Educating Maryland Kids spokeswoman Kristin Ford.

“We’re continuing to gain traction and shore up our support as people really learn more about it and understand what Question 4 is really about,” she said.

The DREAM Act would provide in-state tuition for the children of illegal immigrants if they meet certain criteria: earning 60 community college credits, attending a state high school and providing proof they or their parents paid in-state taxes for at least three years.

But state Del. Patrick McDonough (R-Baltimore and Harford), who was behind the effort to petition the original state bill to a referendum, said the poll results may not accurately reflect voter sentiment. Pollsters’ language may have skewed the results by painting the measure in a favorable light, he said.

“The polls to me are meaningless,” McDonough said. “The question of how the poll was presented, using ‘undocumented immigrants,’ ‘DREAM Act,’ I think was misleading.”

Many who oppose the bill are wary of the increasing costs to state colleges, due to the possibility schools would see an influx of DREAM Act-eligible students who may also effectively crowd out opportunities for students who live in the state and are in the country legally.

The state’s Department of Legislative Services estimates the bill will cost the state $3.5 million annually by 2016 in funds going to state colleges. However, Ford estimates the DREAM Act would lead to fewer than 1,000 students entering a two- or four-year college or university next fall.

Though those new enrollments still carry a cost, university economist Jeffrey Werling said the creation of more productive workers and future taxpayers is a longterm payoff for the state. In addition, he said, the state is already obligated to educate these students from the K-12 level.

“I think we look at these folks as somebody we already invested in,” Werling said. “We’re taking the same bet we do [as on] somebody who is authorized.”

The DREAM Act joins six other statewide referendum items on the ballot this year. Ford said the depth of the ballot could pose a challenge for supporters if their message gets lost amid other hot-button issues such as same-sex marriage and gaming expansion.

“There’s going to be a crowded ballot,” she said. “Part of our challenge is making sure there is that level of commitment among our supporters.”

The polls surprised some experts. With issues involving minorities, government and politics professor Robert Koulish said, people may tell pollsters one thing but vote another way in a phenomenon known as the “social desirability” bias.

“People kind of tell a pollster that they’re undecided or they’re voting in favor of an issue just because they don’t want to be judged or perceived on some level that they are responding with some kind of a racial motivation,” Koulish said. “But then once they get in the privacy of the voting booth, they would vote their conscience.”

However, Koulish said many experts anticipated this same phenomenon in the 2008 election before then-candidate Barack Obama won the presidency.

“People are more accepting and less fearful of this generation of young people that really want to do nothing more than go to college and succeed and live the American dream,” Koulish said.