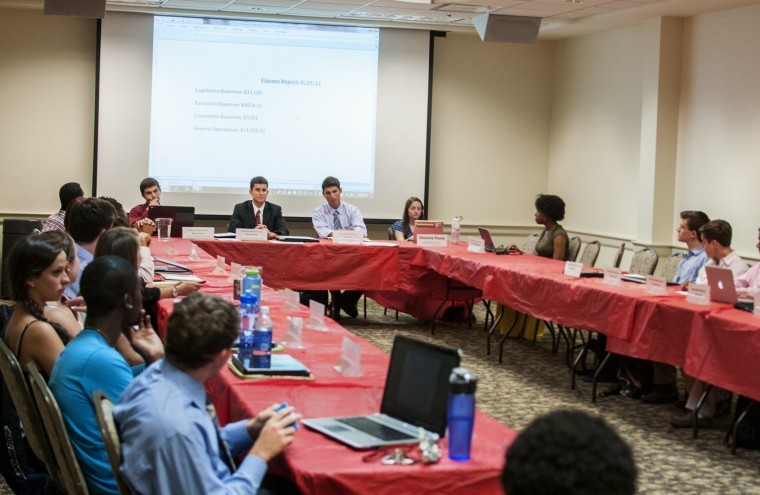 The Student Government Association has moved forward on several resolutions, including urging the University Senate to implement early availability of syllabi, since the body's first meeting.

The Student Government Association has moved forward on several resolutions, including urging the University Senate to implement early availability of syllabi, since the body’s first meeting.

Registering to vote is now as simple as having a university ID and password.

Students at this university are the first in the country to be able to register right on the campus through an in-house online voter registration system. Rather than having to mail in a form and wait several weeks, students can simply use their directory IDs and passwords to register through a website launched yesterday.

“We’re in the year 2012, and it should be a lot easier,” said Student Government Association President Sam Zwerling. “Allowing students to just click a couple buttons will really encourage them to [register], and it shows the university is encouraging them to do it as well.”

Now, all students have to do is log in through the Terrapin Electronic Voter Registration System, which several university departments and organizations created with the state elections board. The initiative comes on the heels of the General Assembly’s decision to pass HB 173, which enables agencies to create an in-house voter registration system using electronic signatures on file, said Zach Cohen, University System of Maryland Student Council chairman. Cohen, along with then-SGA President Kaiyi Xie, lobbied the legislature in May 2011 to pass the bill.

The SGA quickly mobilized after the decision and began brainstorming and developing ideas to create such a system with the help of the elections board, the Division of Information Technology, the Division of Student Affairs, Terps Vote and other interested university departments, Cohen said.

Through the summer months and first month of school, DIT worked to develop and implement the system, Cohen said. The SGA paid $6,000 for system labor costs and other expenses after Zwerling signed a contract with DIT and Student Affairs in September.

The online system will help eliminate problems the elections board has had with paper ballots, said Shane Bryan, a Stamp Student Union Leadership and Community Service Learning liaison.

Paper registration ballots will still be available, Bryan said, but campus groups will be pushing online registration because it’s simpler and quicker.

“It’s a much more streamlined system,” Bryan said. “It should be much easier than having to fill out a paper [ballot] and worry about typos and all that.”

While voting is becoming more accessible in this state, other states, such as Pennsylvania, are re-examining laws in court that would prevent or hinder out-of-state students’ ability to vote by banning student IDs and non-state driver’s licenses for registration and voter identification purposes.

“I hope that this same kind of initiative doesn’t happen in the state of Maryland,” said John Zacker, Student Affairs assistant vice president. “It’s certainly beneficial for students to be able to register at the institution in which they’re enrolled in order for them to participate in their civic responsibility, which includes voting.”

And with the youth vote playing a critical role in elections for the last few years, Zwerling said such legislation would backpedal on progress students have made in influencing change.

“I think it’s really exciting that Maryland is taking a lead on this issue and saying that we’re going to be a leader in making sure our students are civically engaged,” Zwerling said. “We’re going to be taking over this country soon — our generation — and we need to able to be involved in that process.”

“I think a lot of students choose not to vote because it’s inconvenient to get an absentee ballot mailed or to go home to vote,” Clarke said. “If there is an easy option to change your registration to vote in College Park, students will be more likely to participate in the election.”

The online system is currently only available for students, but faculty, staff and other state residents can use their Maryland state-issued driver’s license to register on the state elections board website.

Cohen said system collaborators do not have specific estimates on the number of students they expect to register online, but he expects it to drastically improve voter participation for years to come.

“It’s going to be revolutionary in registering students to vote,” he said.

Students can register to vote in this state using their directory ID and password at www.sga.umd.edu/umdvotes.