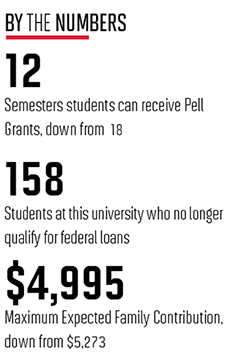 Pell Grant changes as of July 1

Pell Grant changes as of July 1

Students relying on federal loans may have been waiting with bated breath to see how they would be affected by recent changes in Pell Grants, but university officials maintain that, thus far, only a small number of students will have more difficulty paying tuition.

Although the maximum need-based grants is still $5,550, students can now only receive Pell Grants for 12 semesters, rather than 18 — a change that went into effect July 1. Additionally, the Expected Family Contribution — the amount a family can afford to pay for tuition each year — dropped from $5,273 to $4,995, leaving 158 students at this university thus far who no longer qualify for grants, said Sarah Bauder, the Student Financial Aid assistant vice president at this university.

“I think cutting financial aid for students, whether it’s Pell Grants or other types of financial aid for the middle class, is an enormous concern,” Loh said. “The future of this country, the long-term future … depends on having the best educated workforce in the world.”

Since minority groups — especially black students — statistically take longer to graduate, these students have been hit the hardest by the recent changes, according to The Project on Student Debt, a research organization. The financial aid office does not yet have complete data on how many students have been affected by this change.

Black Student Union President Wendell Alston Jr., who went to a high school that was “about 99 percent minority,” said he has many peers who have relied heavily on federal loans, and he’s already wary.

“It’s lowering the opportunity for people in the minority communities who want to go to college but don’t have the finances for it,” said Alston, a junior business major.

Because of this, some students, such as freshman journalism majorClaire Gawryck, who relies on a Pell Grant, said the government should prioritize higher education funding.

“I think it’s partially the government’s obligation to provide students with money to go to school because students can’t always help what happens to them or why they can’t afford college,” Gawryck said.

Because it is unrealistic that the university can issue more scholarships and loans, Alston said, officials should focus on providing students with resources to help them seek out alternate financial aid options.

Gawyrck said the university has already provided her with additional grants as well as offered work-study opportunities. She feels other students will be more comfortable with the Pell Grant changes if the university continues to “make those resources available to as many students as possible.”

Educating students about how the revised Pell Grants may affect them is also important, Alston said, adding that the Black Student Union plans to educate the minority community about financial aid changes.