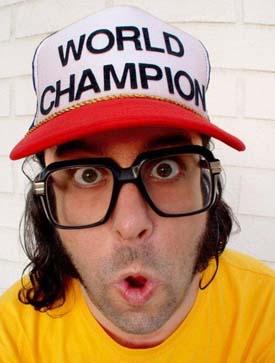 Since breaking into comedy at age 19, Friedlander’s most notable work has been on 30 Rock as The Girlie Show writer Frank Rositano. He also designs his own hats, which he handpicks for the show, and he has made cameos in films including Zoolander and American Splendor.

Despite his film credentials, Friedlander is predominantly a stand-up comedian.

Often juggling performances amidst shooting for 30 Rock, the self-proclaimed “World Champion of the World” will be performing at the DC Improv Comedy Club in Washington on Friday and Saturday.

“My first open mic was in D.C. in an amateur comedy club, and I’ve been doing stand-up ever since,” Friedlander said. “It is the easiest and most fun thing to do because it is where I feel most comfortable.”

It also gives him a chance, unlike his scripted work, to be a little ridiculous.

His most famous act, known as “World Champion,” developed out of improvisation from a joke-gone-bad during one of his earlier shows and involves a character who makes outlandish claims of excellence.

For one bit, Friedlander asks a member of the audience what he or she does best, and responds with, “I’m better.”

“I, the World Champion, am always busy doing things like breaking sports records and hooking up with hot girls while being a role model for children,” Friedlander said.

Friedlander knows one cannot remain stagnant with the same routine for long, however.

“Stand-up is always a changing thing, and I had a lot of ideas and jokes for ‘World Champion’ that would work better in other mediums,” Friedlander said.

According to Friedlander, the next logical progression was to create a book as an extension to his stand-up act. The end result, “How to Beat Up Anybody,” is a collection of jokes and photos designed as an instructional karate book.

“In 2009, book publishing companies were asking me to do a book, but little did they know that I had been working on one sporadically since 2003,” Friedlander said. “I loved the idea of making a satire of constructional martial arts. It was a total passion project for my fans and isn’t just a replication of my stand-up act in book form.”

Much like its character’s knack for absurdity, the novel touts the ability to “teach things that no one else dares to teach.”

This includes a section devoted to ninja-awareness and self-defense.

“Due to the economic downturn, ninjas have really cut down on their resources, but they won’t stay in hiding forever,” Friedlander said. “People need to know how to defend themselves.”

The novel, like the act it was based on, was a gamble for Friedlander. But, as Friedlander has learned, sometimes the biggest risks yield the greatest rewards.

“When I first put on the ‘World Champion’ hat, like an idiot, I was nervous,” Friedlander said. “But you have to always take risks in life if you want to get anywhere. And I would know, I am the World Champion after all.”