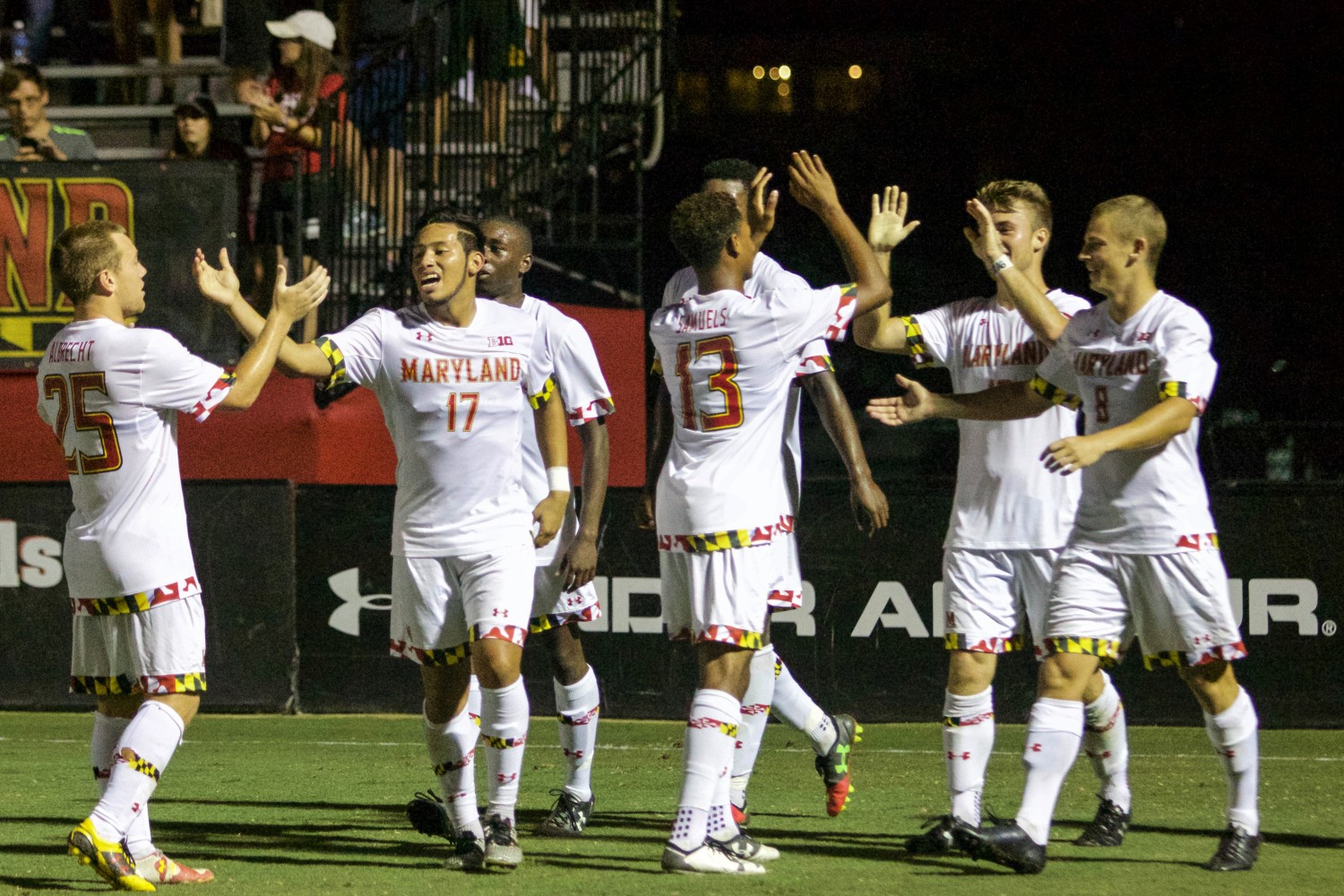 Through the Maryland men’s soccer team’s first four games this season, they utilized their midfield to facilitate an offense that’s combined for a Big Ten-best of 12 goals.

But the No. 5 Terps got away from that tactic in the first half of their 1-1 draw with No. 4 Indiana on Friday. The Terps’ backline sent long kicks down the field to the forwards, but the passes were often intercepted or inaccurate.

After coach Sasho Cirovski changed the Terps’ formation at halftime, the players improved their ball movement and created more opportunities.

“We didn’t hold the ball very well, and we didn’t have the urgency in runs off the ball, either coming to the ball or running into spaces,” Cirovski said. “As a result, guys were getting stuck on the ball because there weren’t a lot of options. We were coming second-best on a lot of the balls.”

Entering this season, the Terps had the most turnover in their midfield. While the team lost just three starters from last season, two of those were midfielders Tsubasa Endoh and Mael Corboz, who combined for 32 points last year.

But Williamson wasn’t available Friday after a South Florida player made contact with his head in the match last Monday, so the Terps faced the Hoosiers without one of their most dynamic scorers. Jorge Calix started his second game this year in Williamson’s place.

His absence hurt the Terps from the start as they attempted six shots in the first half Friday and fell behind 1-0 in the seventh minute. The Hoosiers controlled possession throughout the period.

“They’re a tough team to play against,” defender Alex Crognale said. “It’s hard. I don’t know if we were up for the challenge in the first half. We weren’t moving enough off the ball.”

Cirovski made a change at halftime that fixed the Terps’ issue.

The Terps normally play with four midfielders and two forwards, but they switched to playing with three midfielders and three forwards in the second frame. Cirovski said that opened up more space for his team to move the ball around.

In the second frame, the Terps generated more looks on offense, leading to defender Alex Crognale’s equalizer score in the 87th minute.

“The team wasn’t happy at halftime,” Cirovski said. “Before I walked in, they were already talking about problems we needed to solve. In the second half, we really asserted ourselves. We were emotionally better and tactically we were better.”

Goalkeeper Cody Niedermeier said one reason Maryland had trouble working the ball through the midfield was Indiana midfielder Tanner Thompson’s ability to close out on offensive players. Thompson leads the Hoosiers with six points and was an NSCAA All-American last year.

The Scarlet Knights, however, haven’t scored a goal this season. They’ve given up 12. After the Terps’ midfield battled against one of the best units in the country Friday, it’ll look to exploit Rutgers’ defense.

“We’ve been working on our midfield rotation quite a bit,” Niedermeier said. “We didn’t come out with the right mentality. They kind of hurt us from the beginning, and we struggled with that. Towards the end, we were able to figure them out a little bit and put them on their heels, which is good.”