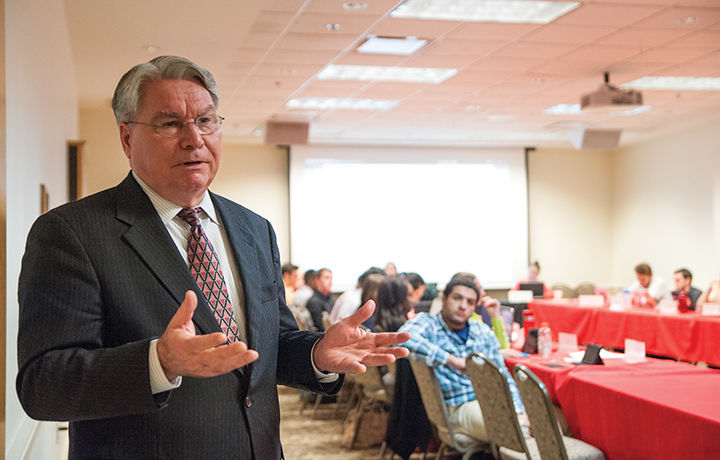 More than a year ago, junior economics major Chris Bangert-Drowns, who is currently not enrolled in classes, stood before the SGA to advocate for the Police Advisory Review Council in wake of student concerns about police transparency.

“For a while, there’s been an idea of this race-blind society,” Bangert-Drowns, also a Student Labor Action Project member, told the Diamondback in a March 2015 article. “The problem is there is not a strong enough structure to combat racism on this campus.”

On March 10, 2015, the Student Government Association voted unanimously to create the advisory council to facilitate more discussion between University of Maryland students and University of Maryland Police. But the council — which is still not entirely filled — wouldn’t meet for the first time until more than a year later, on April 22.

While the creation of the police advisory council was one of the SGA’s notable legislative actions during the 2014-15 session, senior government and politics major and former SGA President Patrick Ronk admitted the organization “dropped the ball” by waiting so long to form the council and meet with University Police.

“It was just something we didn’t necessarily work as hard on at the beginning of the year as we could have, and we kind of realized it, and we started working on it to get it back up,” Ronk said.

During its first meeting in the Pocomoke Building, the council discussed various topics, including the format of future meetings, which will happen monthly and include an open meeting in between where students on the campus will be able to express concerns to student representatives, said Johanna DeGuzman, the SGA’s now-former diversity and inclusion director. Additional discussion topics were adopting procedural changes to the Resident Life drug use policy to discourage student criminal liability, and updating the police department’s website to include officers’ photos, names and badge numbers to make them recognizable to students, she added.

While the council is supposed to have one SGA representative, one faculty or staff member, two graduate students and at least four undergraduate students, not all positions are filled or completely filled yet, said DeGuzman, a senior communication major.

In addition to the meetings, the police department would like to see these student representatives undergo training so they have an understanding of police law enforcement duties, said Michael Weller, the internal affairs coordinator within the department.

“The very rich perspective that [students] bring to the table, especially in light of Freddie Gray and all the other issues and tragedies we’re seen in the past 18 to 24 months, that’s enlightening,” University Police Chief David Mitchell said. “We’re committed to being great listeners.”

DeGuzman, who helped spearhead the council’s formation, noted the diversity committee had internal issues this year that prevented it from making progress with this council earlier on.

“I had a lot of things going on, so I couldn’t dedicate as much time,” DeGuzman said. “There were a lot of people who were doing other things other than diversity committee, so when I would ask them to do a task, it would kind of get pushed back.”

Even when diversity committee members did put out an application from Feb. 26 to March 3 to fill the council seats, DeGuzman said the committee only received three applications.

“We got responses back saying, ‘Oh, we designated someone to apply,’ and they just didn’t,” DeGuzman said. “We had asked the people who had contacted us and they were just like, ‘Oh, well it’s toward the end of the semester’ — I think they got busy.”

Christine Hagan, this university’s NAACP chapter’s executive chair of activism for the 2015-16 year, said the organization was involved in other endeavors by the time the application was put out.

“It’s not that we don’t support it,” said Hagan, a sophomore environmental science and policy major. “When it came time to put members up, they were committed to other things.”

An underlying reason for the low student interest in the application process could be indicative of the ever-changing focus of campus advocacy groups, Ronk said.

“The student interest behind it really fell off,” Ronk said. “Campus activists shift their focus a lot, and I think last year was a big focus on the police … [this year] there wasn’t as big of a push student-wide on that this year.”

While Mitchell said he and other police officials were not offended by the delay and understand that SGA members are “bogged down,” he joked they still gave the organization’s members an occasional nudge.

“We had talked to Patrick … [University Police spokeswoman Sgt.] Rosanne [Hoaas] reminded him, ‘Hey man, don’t forget about us, we have a thing to get rolling,'” Mitchell said.

The diversity committee, which sophomore special education major Ja’Nya Banks will head during the 2016-17 year, intends to fill the entire council by next semester, DeGuzman said.