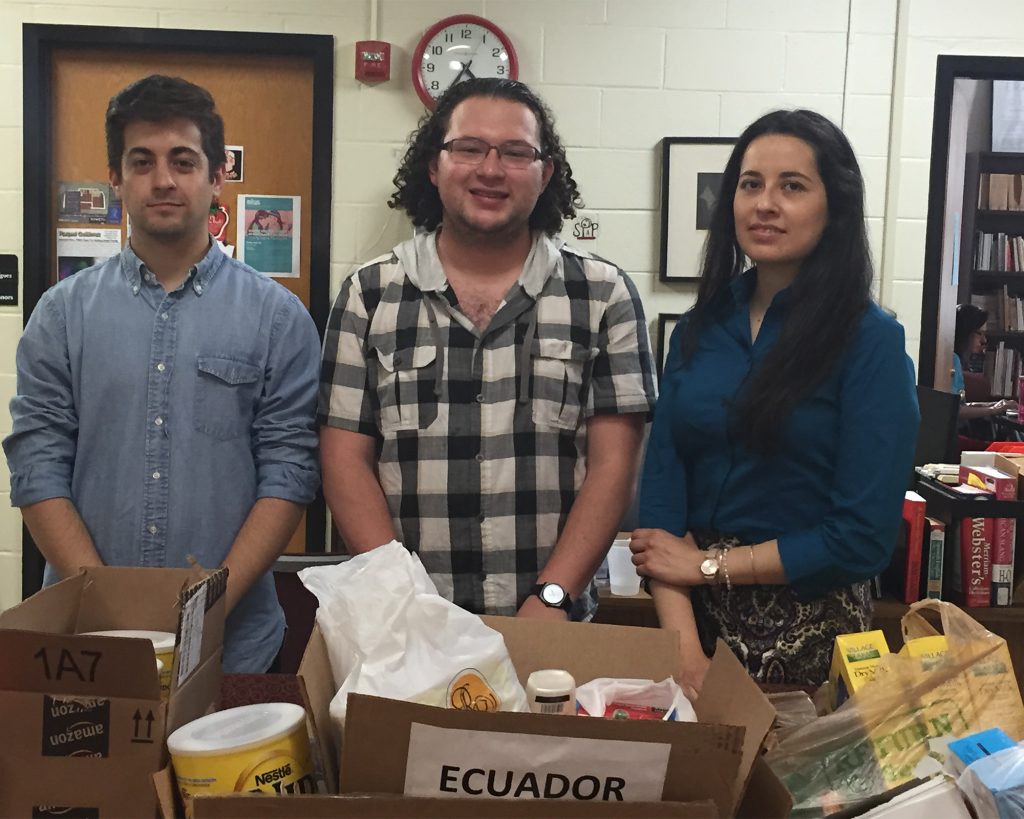 When Maria Monsalve heard about the earthquake that struck Ecuador on April 16, she said she immediately wanted to do something to help the people affected.

“I’m from Ecuador and it was very shocking for me to hear the news, especially since I could not communicate with my family immediately because of power outages and lost cell phone reception,” said Monsalve, a University of Maryland fourth year doctoral student studying Latin American literature and a teaching assistant in the Spanish and Portuguese department.

The 7.8-magnitude earthquake killed close to 300 people in the northwestern part of Ecuador, according to an nbcnews.com report.

Monsalve decided to start the donation drive, which ran from April 18 to May 2, and focused her efforts on collecting powdered milk and non-aerosol insect repellent, even though Ecuador’s embassy is asking for people to donate water, canned and dry foods, batteries, sleeping bags, hygiene kits and more, according to Ecuador.org.

“Although there were other items on the list, we wanted to focus on these two items because the powered milk is really inexpensive, and the insect repellent because of the concern we have for the people sleeping in the open because of the threat of the Zika virus,” Monsalve said.

While many college students probably feel they cannot afford to give money to Ecuador, Monsalve said doing a donation drive that only asks for two inexpensive items could help students feel like they can contribute to the cause.

“Students can think that they can afford just a bottle of repellent and powdered milk and that is good enough,” Monsalve said. “If you can contribute with that, you are actually providing milk for a week for a family and a little bit of comfort.”

Education Abroad Executive Director Moira Rogers said she was happy when Monsalve approached her to help out with the donations after a recent meeting the Education Abroad department held for 22 doctoral students ­— mostly from Ecuador — to talk about their experiences interacting with students on the campus.

“In this case there was a very personal connection,” Rogers said. “I have many people from my staff who helped support the meeting that we had, and many people were shocked when we realized that many of the students that we hosted were from the areas most affected by the earthquake.”

Senior Spanish and Arabic major Sophie Hernandez-Peter heard of the donation drive through one of her Spanish professors, she said.

“Initially there was an email sent out by my [SPAN362] professor just explaining that the department was trying to put together some kind of aide package for the crisis due to the earthquake in Ecuador,” Hernandez-Peter said.

Having a great relationship between a university and a country is a great way to show respect for one another, especially during times of hardship, she added.

Doctoral students “come here and worked with us [students],” Hernandez-Peter said. “I think it’s important that we maintain and nurture that relationship because it benefits the students. Having that sense of family, togetherness, union … for us to help is doing good for everyone.”

Having a donation like this that doesn’t involve money can also help students feel more comfortable and more involved with wanting to donate, Rogers said.

“It’s an element of certainty that the repellent and powdered milk are things that are going to get to the people,” Rogers said. “It’s always great to realize that your contribution — even if it’s small — will make a difference and that you can make a difference.”