Against Wisconsin, Brandon Cray gave Maryland wrestling its first lead of the season 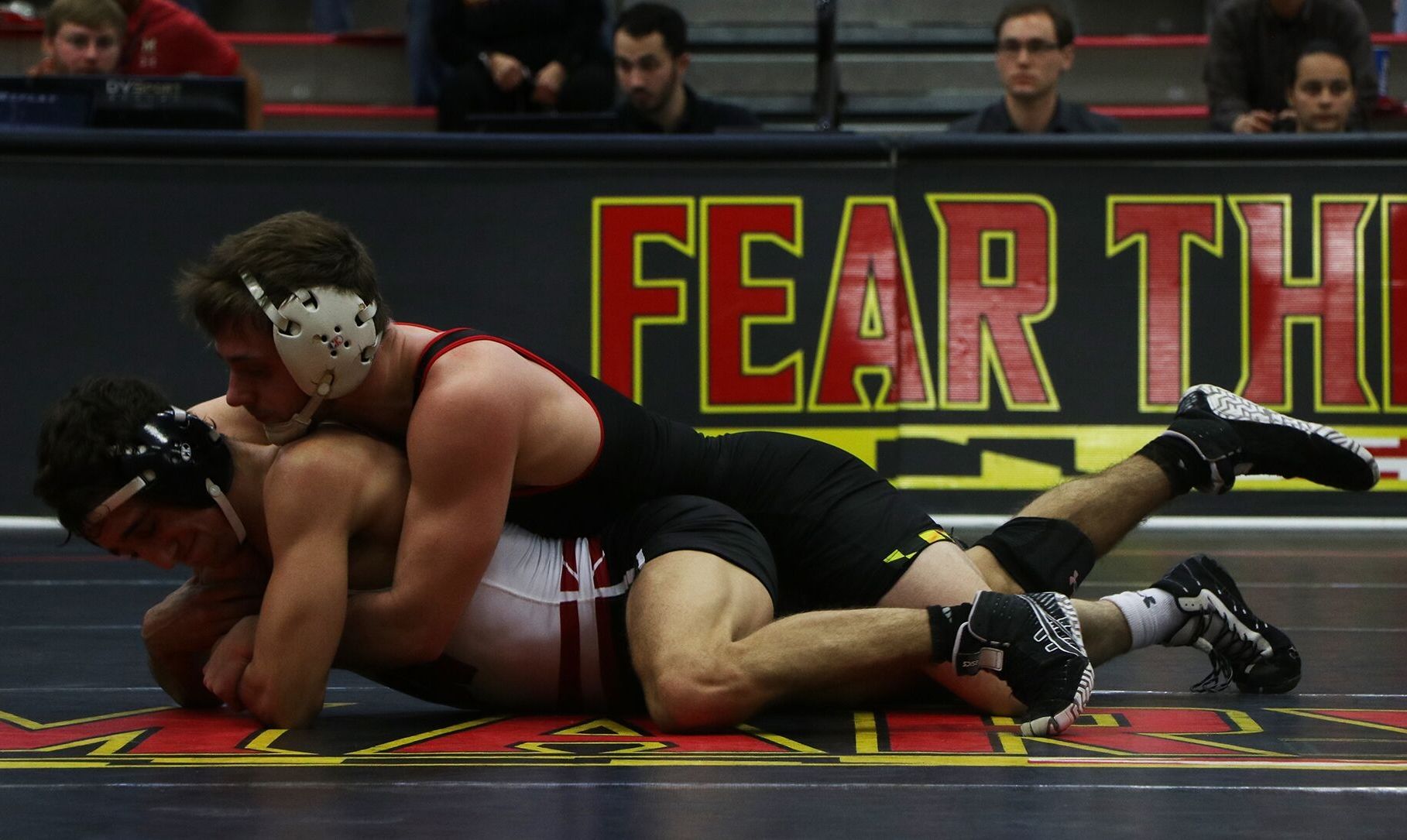 125-pounder Brandon Cray attempts to turn his opponent during Maryland’s 30-9 loss to No. 15 Wisconsin at Xfinity Center Pavilion on Feb. 2, 2019. (Julia Nikhinson/The Diamondback)

The 125-pounder was a disappointing 0-7 in duals and 4-11 overall. He had no momentum behind him, as he was coming off a 17-2 technical fall loss to Michigan State’s No. 7-ranked Rayvon Foley.

Coach Kerry McCoy, though, has believed in Cray all season, choosing to continue starting him over upstart freshman King Sandoval. And against the Badgers on Saturday, McCoy’s faith was finally rewarded.

Cray stepped in against Wisconsin’s Ethan Rotondo and looked like a completely different wrestler than his record might infer. After a dominant performance, Cray was able to secure his first dual victory of the season in just the second Big Ten win of his career.

“It feels good, obviously,” Cray said. “I’m just looking to use this as a spark for me. I’ve been putting in the work and I’m going to use this momentum of the match to carry on. The end of the season is the big goal.”

Cray came out on fire, securing three takedowns in the first period alone. The second period was more even, though, and Rotondo was able to flip the riding time in his favor.

With the score still 6-1 in the third in Cray’s favor, the bout was still up in the air. As the tired wrestlers pawed at each other trying to gain an advantage, Cray put the final nail in the coffin by adding a late takedown and clinching the match, 8-3.

While Cray’s season had been disappointing up until Saturday, it wasn’t a complete waste. The Hamilton, New Jersey, native had a strong performance at the annual Midlands tournament in late December, which included several key upsets. Even though he made a strong run, Cray still fell one match short of placing in the tournament’s top eight.

At 125 pounds, Cray wrestles first in virtually every dual, which comes with its own set of expectations and pressure that the redshirt sophomore welcomes.

“That’s my job,” Cray said. “The smallest guy is always going out there and setting the tone for the whole team. I always hope that with my performance I can start that momentum for the entire team throughout the whole match.”

If Cray can consistently provide victories at the beginning of dual meets to spark the Terps (0-8, 0-5 Big Ten), it could spur some positive team showings in an otherwise woeful season.

McCoy had a hunch that Cray would break out of his slump on Saturday. A season ago, Cray lost in heartbreaking fashion to Rotondo, and McCoy hoped that would fuel his 125-pounder to victory against Wisconsin a second time around.

“We were beating [Rotondo] pretty good [last season] by three or four points but we got reversed to our back with 30 seconds left in the third period to lose,” McCoy said. “So we knew we had an opportunity to go out there and win today.”

Now that Cray is officially in the win column, that leaves 197 pounds as the only weight where Maryland has yet to earn a victory this season.

With several big dual meets coming up, and the Big Ten and NCAA tournaments looming, Cray is glad that the monkey is finally off his back.

“It’s good to get that out of the way,” Cray said.