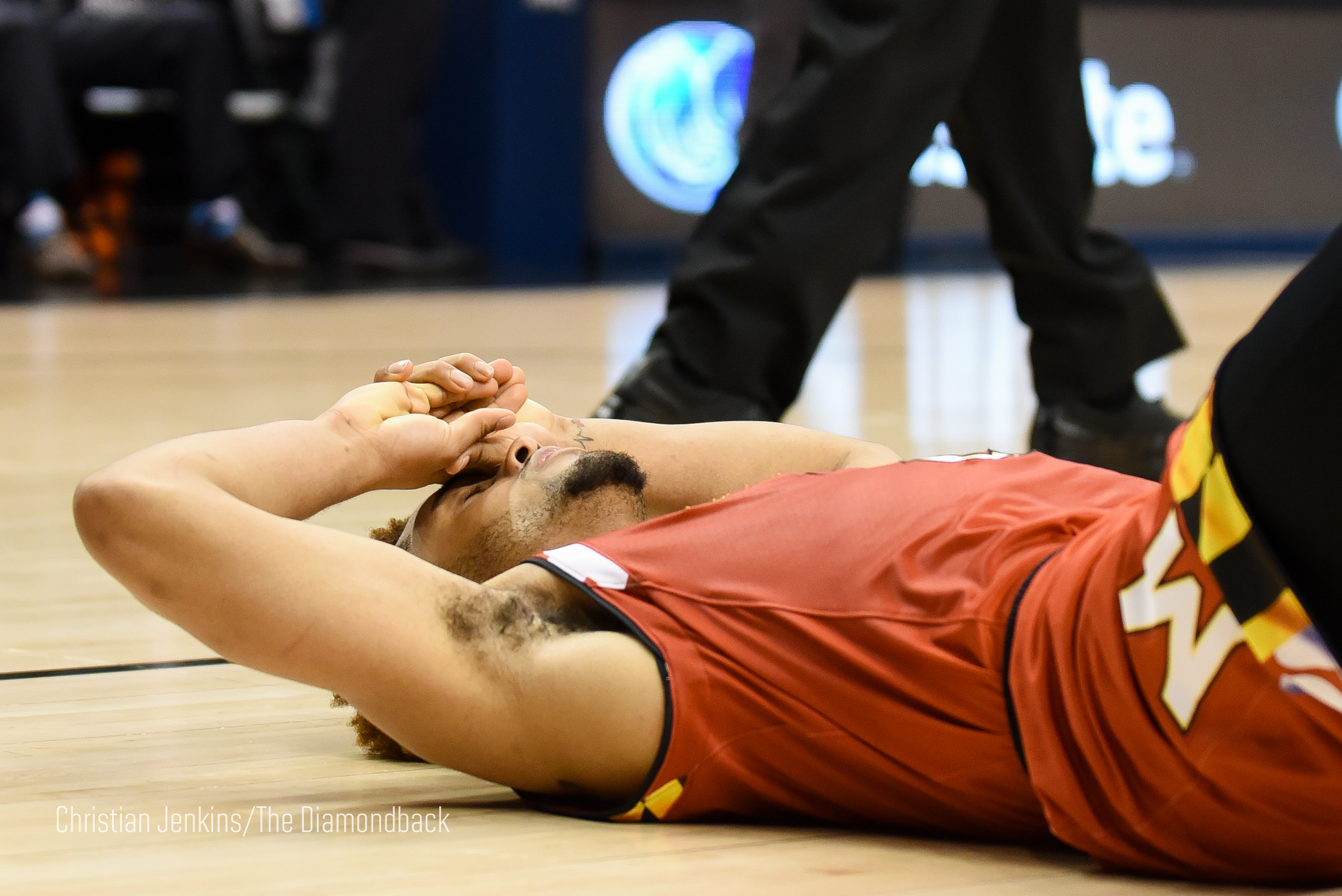 Guard Melo Trimble puts his hands over his head after his is unable to finish a lay up to give the Terps a lead in the final seconds of the game when the Terps lost to Michigan State, 61-64, in the Big Ten semifinals at Bankers Life Fieldhouse in Indianapolis on Mar. 12, 2016. (Christian Jenkins/The Diamondback)

Minutes after the worst postseason shooting performance of his college career, Melo Trimble leaned down in front of his locker, scrolled through his phone’s lock screen and flashed the smile that’s helped turn him into a local celebrity.

The Terrapins men’s basketball guard had received several congratulatory messages; some from old teammates, some from old coaches.

But one message stood out.

Trimble was referring to his mother.

“Even if I didn’t play a good game, my mom says good game,” Trimble said. “As long as I get positive comments, I’m always going to be behind myself and just more confident.”

When glancing at the box score, it’d be hard to argue Trimble had a good game in the No. 3-seed Terps’ 64-61 loss to No. 2-seed Michigan State in the Big Ten semifinals.

Eleven points doesn’t look too bad. But keep looking until you reach Trimble’s shooting line: 2-for-15.

Trimble acknowledged his offensive struggles, so he said he “locked in” on defense.

Still, the sophomore’s shooting crippled the Terps on Saturday. They played as good defensively as they have in the weeks, taking a potential Final Four team to the final seconds.

They played good enough to win.

The Terps’ season isn’t lost. Far from it. There’s still a national tournament to play, an NCAA championship to strive for. But the Terps aren’t going to reach their potential if Trimble misses 13 shots in a game.

No one wants to place the blame on Trimble. He’s a super-likable, incredibly humble 21-year-old kid. Last season, he unearthed a floundering program and propelled it to the national spotlight.

He plays the game the way it’s supposed to be played, the way we played it with our friends on the school blacktop when we were little kids: With a smile on his face.

And when Trimble is on, he’s as good as anybody in the country.

Before the contest, he met Spartans guard Denzel Valentine at center court for a handshake. The scene provided a poignant snapshot.

At one point, many considered Trimble a national player of the year candidate.

It was tough to watch Trimble repeatedly drive into the lane Saturday, with Spartans limbs repeatedly pounding into his flesh.

He finally got a layup to fall with 14 seconds left, blowing past Spartans guard Eron Harris to cut the Terps’ deficit to 62-61. But reserve guard Varun Ram thought Trimble deserved a trip to the line and a chance to tie the game.

The toughest non-call to watch came moments later. With the Terps trailing by one, Trimble fought his way into the lane before flipping the ball toward the rim while falling from contact.

He sat on the floor, waiting for the foul to come.

I asked Trimble what was going through his head at that moment. He paused for three seconds before answering.

“Just…nothing,” Trimble said. “I mean, I thought I was going to get the call. They didn’t call it. It is what it is. There’s nothing you can do about it.”

Coach Mark Turgeon turned toward the scorer’s table and lifted his arms, preparing to let out some anger. He held back.

After the buzzer had sounded, Trimble untucked his jersey and headed to the locker room. Reserve guard Trevor Anzmann placed his arm around Trimble’s neck, then athletic director Kevin Anderson did the same, both hoping to offer their star warmth after a rough game.

They weren’t the only ones.

Soon, he retreated to the back of the locker room, checked his phone and saw the message from his mother. He grinned.