The College Park Metro Station had the 6th highest crime rate of all stations in 2016. 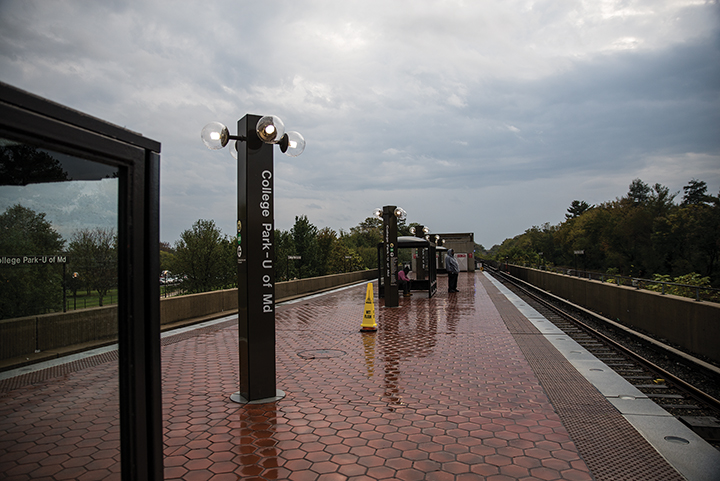 The College Park Metro Station had the sixth highest crime rate in the metro system in 2016, according to the Washington Metropolitan Area Transit Authority’s annual security report released Monday.

Washington’s Minnesota Avenue experienced the most crime, with 53 reports. The Greenbelt and New Carrollton stations also made the list of the 10 Metro stations with the most crime. Eight of the top 10 stations are located on the Green Line.

There were 17 motor vehicle thefts and 17 bicycle thefts at the College Park Metro Station in 2016, making those crimes the most common, WMATA spokesman Richard Jordan, wrote in an email after a Thursday presentation from Metro officials detailing the specifics of the report.

There were two incidents of larceny and three robberies, Jordan wrote.

College Park Mayor Patrick Wojahn said the city has spoken with Metro police in the past about the “huge problem” of auto thefts at the College Park Metro Station.

“We encouraged and continue to encourage them to put in additional safety measures,” Wojahn said. “I do hope that police will consider putting in additional security cameras.”

As of May 2015, the city owned and maintained 21 cameras, which are located throughout the Old Town and Calvert Hills neighborhoods and along Route 1.

Senior journalism major Patrick Stoll said he is not surprised by the amount of crime at the College Park station.

“One factor that you can chalk that up to is that it’s not near anything,” Stoll said. “It’s far off campus and it’s not well lit.”

Ammy Adhia, a senior psychology major, uses the Metro about once a month to travel home. Adhia only uses the Metro during the day because she knows it is unsafe at night, she said.

“Knowing that College Park is number six kind of upsets me,” Adhia said. “I think we should have more security at metro stations.”

Wojahn suggested that Metro users protect their belongings as best they can and encouraged people to report any suspicious activity.

“People should make sure they lock their cars and don’t leave any valuables out in the open when they park,” Wojahn said. “Reporting suspicious activity may help reduce crime as well.”