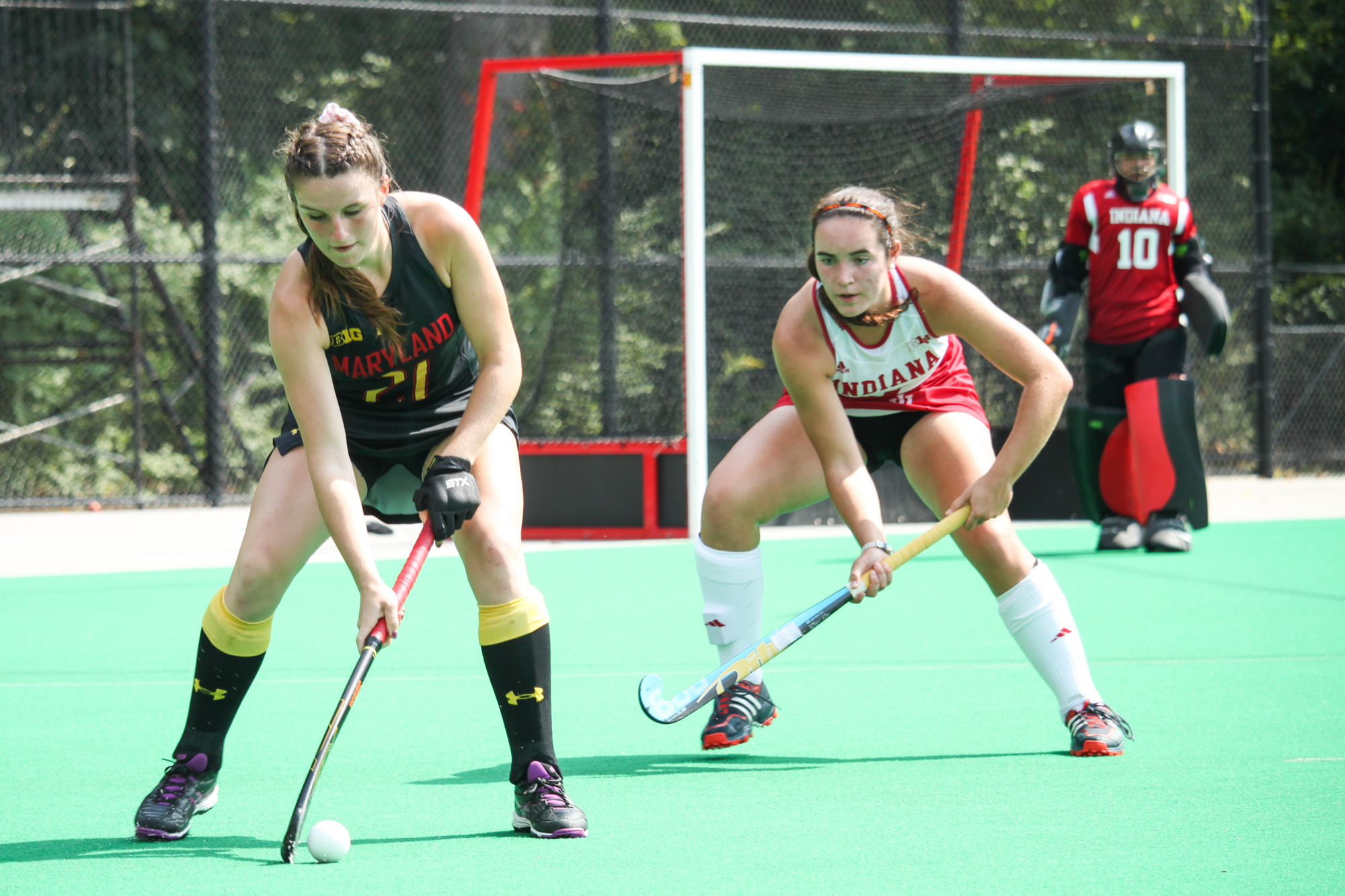 Midfielder Madison Maguire defends the ball in Maryland's 4-1 win over Indiana at the Field Hockey & Lacrosse Complex on September 17, 2016. (Reid Poluhovich / The Diamondback)

“It was an off-balance shot,” Maguire said. “It’s not the most exciting goal.”

Because she wasn’t in a perfect position, Maguire couldn’t put much force on the ball. The look from the top of the circle snuck by Spartans goalkeeper Katie Miller, but Maguire knew she could do better.

She proved it in the 57th minute when she finished a cross from forward Emma Rissinger for her second goal in the breakout performance that helped the Terps earn a tie for first in the Big Ten standings.

“Madison was amazing, very confident,” forward Linnea Gonzales said. “If we keep pushing her, she’s going to be a great asset.”

Entering Friday, Maguire had played in every game this year and started seven. She’d taken nine shots, six of which were on goal. In practice, though, the team said she was converting the looks.

“She was scoring all the time,” coach Missy Meharg said. “We’ve been doing so many shooting drills. We just took a look at it and said we can play her at a side mid or we can play her as a forward.”

Maguire is listed as a midfielder on the roster, but Meharg moved her to forward earlier in the year. That’s where Maguire played when she scored more than 100 goals and won three New Jersey state titles with Rumson-Fair Haven Regional High School.

Meharg pointed to those statistics when discussing Maguire’s production capabilities. The coach also reflected on the freshman’s lacrosse background, which Meharg thought helped her the second time.

“She’s going to be able to play the ball in the air,” Meharg said of Maguire’s lacrosse skills. “So anything that’s around here, she’s going to make a touch on it.”

On that point, Rissinger took the ball around her defender and charged down the baseline with the Terps leading by one with about 14 minutes left. Miller ran off of her line and slid toward her.

Rissinger managed the pass, though, and lifted it over Miller. Maguire waited alone in front of the net and tapped the ball into the empty cage.

“Thank God Emma was there for the second goal to get me a prettier, nicer goal,” Maguire said.

The score gave the Terps a two-goal cushion for the final stages of the game. It also came when the attack needed a spark. Less than 10 minutes before, forward Welma Luus, who leads the team in points, twisted her ankle and left the field.

“When Welma got hurt,” Maguire said, “I knew someone had to step up and put the ball in the goal.”

Maguire also flashed her stick skills on her first score. She received a pass from midfielder Lein Holsboer in the middle of the circle. Her first touch took the ball further away from the goal and forced her to turn her back on the net.

From there, she used intricate stick work to change directions, separate from her defender and manage the first tally in a Terps uniform.

“She’s a little troublemaker,” Gonzales said. “She can dribble around anyone. She has such good skills.”