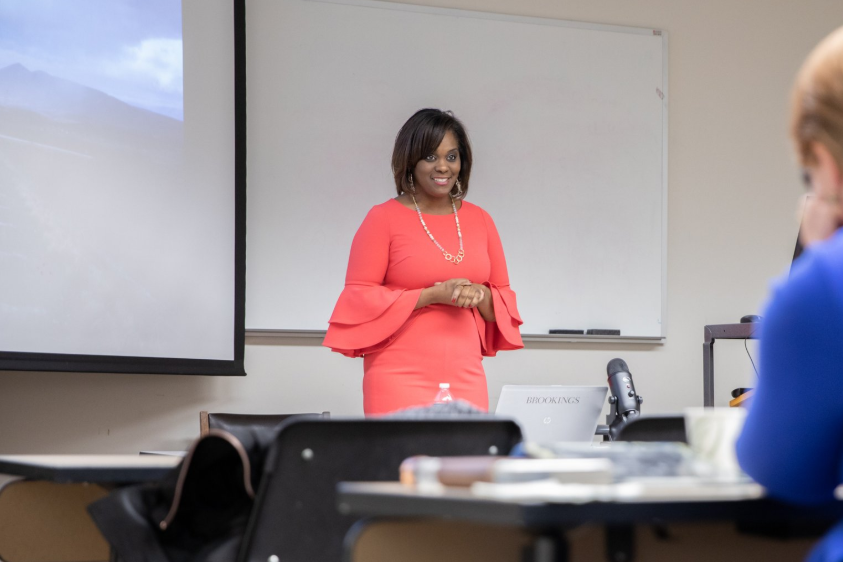 In rural Garrett County, some dairy farmers have struggled to compete with larger farms because they lack a commodity many people in urban areas take for granted — internet access.

“The farmer sits one mile away from where the connection stops,” said Nicol Turner Lee, a fellow at the Brookings Institution, a Washington, D.C.-based think tank. “Small farms are dying … because of this lack of access.”

About eight percent of Americans — many of whom reside in rural areas or are people of color — don’t have consistent access to broadband internet at home, according to Turner Lee, the most recent guest lecturer for “Digitally Invisible: How the Internet is Creating the New Underclass,” part of a lecture series hosted by the University of Maryland’s iSchool.

The narrative of digital access being ubiquitous is false, Turner Lee said Thursday at Hornbake Library.

She pointed to students in Staunton, Virginia, who go to a local barbershop that has a Wi-Fi hotspot to do their homework. Others in Harford County head to a local McDonald’s to use the free internet service there — until employees at the fast-food chain turn them away when too many show up, Turner Lee said.

Punit Khiyara, a junior information science major who attended the lecture, said he never knew how many people don’t enjoy the same access to broadband internet and the variety of digital devices as he did.

On a spring break trip to Mumbai to visit family, Khiyara said the lack of internet completely changes his family’s lifestyle.

“They aren’t accustomed to getting work done really fast. They do a lot of extra work on things Americans take for granted,” Khiyara said. “They have a whole process to go through when they call a cab or buy movie tickets.”

[Read more: Panel at MilkBoy ArtHouse discusses the role of the music critic in the internet age]

Not only is there a lack of internet infrastructure in rural areas, Turner Lee said, but apps like Uber and Airbnb rely on online banking, something not all members of marginalized communities have.

“The transactional capacity of the internet now requires you to have financial collaterals to call for an Uber,” she said. “The digital ecology has moved from a pixel-based (like e-mail) to something more paradigm-shifting, where our data is used for manipulative purposes.”

Turner Lee called this shift “discrimination by big data,” the practice of avoiding certain communities because they wouldn’t yield enough revenue. For example, ride-sharing services are often reluctant to expand to rural or marginalized urban areas because few people would use the service.

“If you live in a marginalized community, even if you’re not online, your lack of data is actually a commodity, because it tells the companies where not to go,” she said.

Alusine Jalloh, a junior psychology major, said he doesn’t know anyone who doesn’t have access to the internet. If they don’t have it at home, they can use computers at a public library, he said.

“They’re not able to pick up things on the fly,” Jalloh said of people without internet access. “Like for example, fact-checking. I like to Google [and] fact-check my friends.

“I feel like they’re also more in the moment, too,” he added, “because a lot of us are distracted by constant internet access. We’ll be in the room with a lot of people but we won’t interact because we’re highly tuned to our phones. They have the benefit of just being able to enjoy the now.”