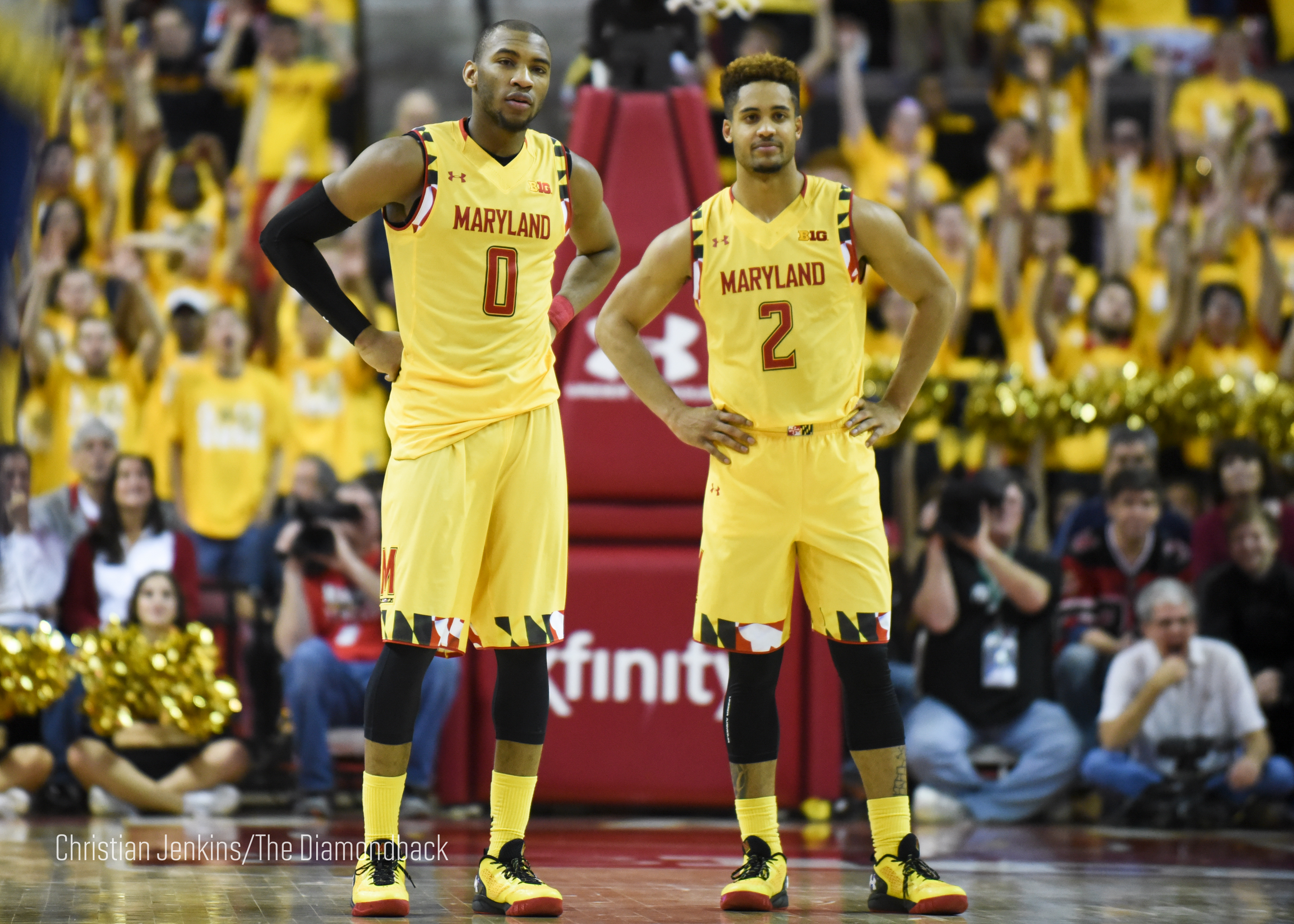 Guards Rasheed Sulaimon and Melo Trimble take a second to relax while a teammate shoots free throws when the Terps defeated Michigan, 86-82, at Xfinity Center on Feb. 21, 2016. (Christian Jenkins/The Diamondback)

When the Terrapins men’s basketball team steps onto the floor Friday night in Indianapolis, the NCAA Tournament will be less than a week away.

For a Terps team that began the season considered national title contenders, this weekend’s Big Ten Tournament is the last chance to work out any kinks or flaws. After surrendering 80 points or more in three of the last four games, the Terps have worked on their defense this week. In Indianapolis, they’ll see if that extra work pays off.

Improved defense could help put an end to a rough stretch — the Terps have lost four of their past six games and suffered their largest loss of the season in the regular-season finale. The Terps, who have a double bye in the conference tournament, hope to get back to their winning ways and build momentum heading into March Madness.

The No. 3-seed Terps begin play Friday against No. 11-seed Nebraska.

“We’re looking at it as a miniature version of the NCAA tournament,” senior guard Rasheed Sulaimon said. “We’re going to trying to use the Big Ten Tournament as much as we can as our last preparation for the NCAA Tournament.”

The Terps began the season as No. 3 in the Associated Press Poll but have fallen to No. 18 after the rough end to the season. The skid began Feb. 13 with a 70-57 loss to Wisconsin, the Terps’ first home loss since 2014. It continued days later with a 68-63 loss to Minnesota, who was previously winless in conference play.

While the Terps avoided a three-game losing streak against Michigan, their defense began to show cracks. Against the sixth-best scoring offense in the Big Ten, the Terps gave up 82 points. That porous defense continued in an 83-79 loss to No. 13 Purdue, the fourth-best offense in the conference.

Then, in the regular-season finale Sunday, the Terps’ poor transition defense doomed in an 80-62 loss against No. 10 Indiana, the top-scoring squad in the Big Ten.

While the Terps faced a bevy of high-scoring offenses in that stretch, coach Mark Turgeon drilled the Terps on defense this week in practice.

“You have to be one cohesive unit,” Sulaimon said. “One person gets beat to the goal we have to trust and know our teammate is going to be there to help.”

While the Terps haven’t enjoyed the six-game stretch to end the season, Turgeon said Wednesday it allowed the team to examine issues that might have otherwise flown under the radar. And heading into the Big Ten Tournament, Turgeon believes the Terps are on the right track.

“We’re going to be closer to where we want to be,” Turgeon said. “We’re making strides.”

Guard Melo Trimble, the Terps’ star, has shown improvement in recent weeks. While he’s struggled from the field during this six-game stretch, he’s scored 17 points or more in the past three games.

And he’s welcoming a chance to wipe the slate clean. In recent days, he’s reiterated that every team is 0-0 now.

So Friday can’t arrive soon enough. The Terps have been preparing for the postseason since the year began.

“That was what the regular season was for,” Trimble said. “For us to practice and us to be able to perform in the postseason.”