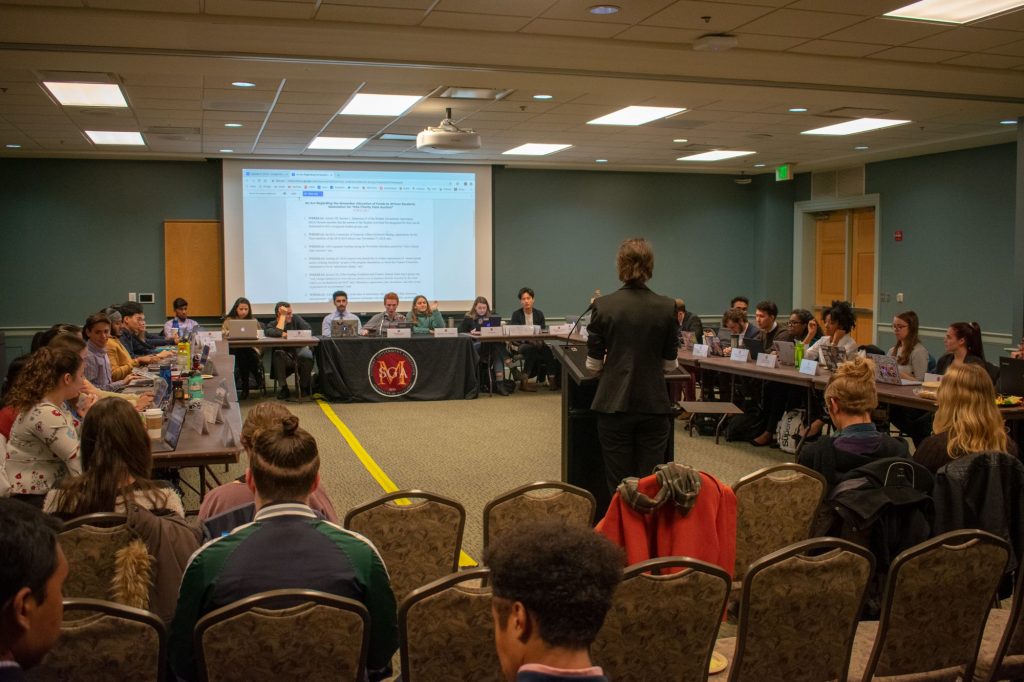 The University of Maryland SGA unanimously voted Wednesday to lobby in the state government for collective bargaining for student-athletes and increased Board of Regents transparency this year, among support for other bills.

Both SGA measures concerned bills recently introduced in the Maryland General Assembly. One bill would give student-athletes at University System of Maryland institutions collective bargaining and unionization rights. Another calls for the USM Board of Regents to add four additional members, raising the total to 21, and would require video of open meetings to be provided publicly.

“This is one of the more robust legislative agendas that we’ve had,” said Student Government Association president Jonathan Allen. “We’ve been very active in Annapolis this year and I’m proud of this legislative agenda and I look forward to strongly supporting these goals.”

The SGA agenda also includes supporting a bill that would require universities to develop policies on student concerns about athletic programs and activities by October of this year.

The bills were prompted in part by the death of Jordan McNair, a football player at this university, and the criticism levied towards this university and the Board of Regents for how they handled the aftermath.

“It’s definitely no coincidence that we’re endorsing and working on several bills that are responding to the events of last semester,” Allen said. “And some of them really address the root of the problems of last semester that have been the case for many years — whether it’s the power structure that’s essentially working against college athletes, or the lack of transparency from the Board of Regents.”

McNair suffered heatstroke at a team workout in May, prompting two external investigations. The first found athletic trainers failed to diagnose and treat him properly.

And when reports of a “toxic” environment within the football program came out in August, the second investigation found abuse that ran unchecked by the university administration. President Wallace Loh fired football coach DJ Durkin in October, after the investigation found both — along with current athletic director Damon Evans and former athletic director Kevin Anderson — partly responsible for the abuse.

The Board of Regents came under heavy fire for its handling of the controversy. The board took over both investigations in August, and recommended that Durkin, Evans and the athletic trainers keep their jobs. Regents also reportedly told Loh that if he didn’t keep Durkin, they’d replace him with a president who would.

Jinwook Hwang, an off-campus neighboring representative, didn’t view the SGA as lobbying for these bills. Because the legislation addresses problems students have openly voiced their concern for, the SGA is essentially providing a platform for those concerns, Hwang said.

“It is rarely controversial in that sense, because people did voice their concerns about the current system,” said Hwang, a junior government and politics major. “It’s more like students lobbying for it.”

And because the university is often under the direct jurisdiction of the state government, the SGA’s lobbying efforts can have tangible effects on students, said Gideon Epstein, the civic and governmental affairs committee chair.

“I’m truly proud of the effort our committee put together, and of SGA more broadly,” Epstein said. “I hope that students will realize that our legislative agenda, in a lot of ways, is one of the most important things that the SGA does all year, because our role is to advocate on behalf of students.”