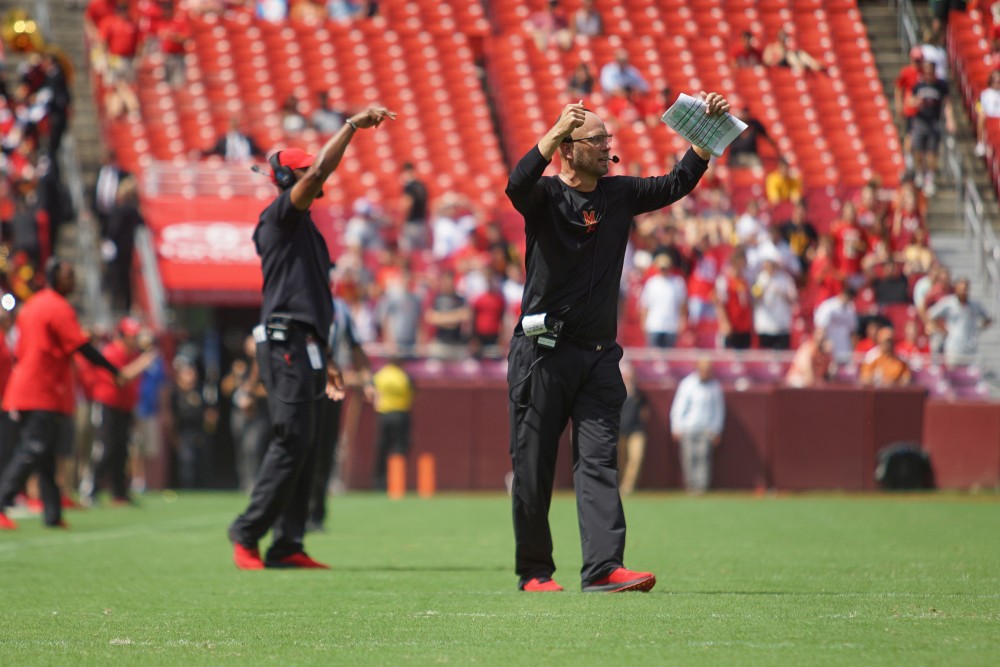 Sitting at the podium inside FedEx Field on Saturday, Maryland football quarterback Kasim Hill turned toward Matt Canada with a smile on his face.

He’d just been asked to evaluate Canada’s performance in his first game as interim head coach.

It was a similar answer to the one Canada has offered repeatedly during press conferences for the past two weeks, hesitant to claim full responsibility of a team he joined in January and took over in August.

With coach DJ Durkin on administrative leave following the death of offensive lineman Jordan McNair and reports of a toxic team culture, Canada has assumed leadership duties — at least, according to his title.

For the first time in his coaching career, Canada stood on the sideline rather than calling plays from the booth. When Maryland visits Bowling Green this weekend, Canada will take with him a week full of experience — and a handful of regrets — as he calls his second game from the field level.

“That’s just a comfort level for me,” Canada said Tuesday. “I’ve just never done it before and a lot of guys do. A lot of guys like it down there better. I’ve always liked it upstairs.”

The 46-year-old said the unfamiliar position wasn’t to blame for two failed quarterback sneaks, which he admitted were bad calls. Particularly egregious was not calling a timeout before a 4th-and-1 play in the third quarter, despite Hill being late getting to the line.

“I take full blame for that, and I’m really glad we still won the football game,” Canada said. “I’m always very critical of myself, and I wish I’d have done a better job with that.”

Canada has tried to hold onto as many aspects of normalcy as he can. Hired in the offseason to be Maryland’s offensive coordinator, he was quickly prodded into the limelight under hellish circumstances. Regardless, as the head coach, he needs to be on the sideline.

He also needs to feign interest in the Terps’ defense while he prepares for the team’s next possession.

Following the win over Texas, Canada admitted that watching defenses frustrates him. Against the Longhorns, he left most of the decision-making to the Terps’ full-time defensive staff, and it figures to stay the same this weekend.

“I felt like I had to [watch],” Canada said Saturday. “But I was still trying to stay out of it. I’m focusing on the offense.”

The only other time Maryland met Bowling Green — Durkin’s alma mater and where he got his start in coaching — the Terps suffered a 48-27 defeat. The Falcons scored three straight fourth-quarter touchdowns, running Maryland off its home field in the loss many considered the death knell for the Randy Edsall era.

Last week, Bowling Green jumped out to a 10-0 lead in the first quarter against No. 23 Oregon, displaying some of the quick-strike threat that blew Edsall’s team out of the water three years ago.

So when Canada was asked Tuesday about the challenges posed by Bowling Green, he highlighted both teams’ offenses rather than offer a defensive solution. And as he patrols the sideline for the second straight week, he made clear that he’s still the offensive coordinator — one who just so happens to be the Terps’ head coach for the time being.

“They take a lot of pride in how fast they go, and that creates a challenge for us on defense,” Canada said. “We’re going to have to do a good job on offense staying up and scoring points.”