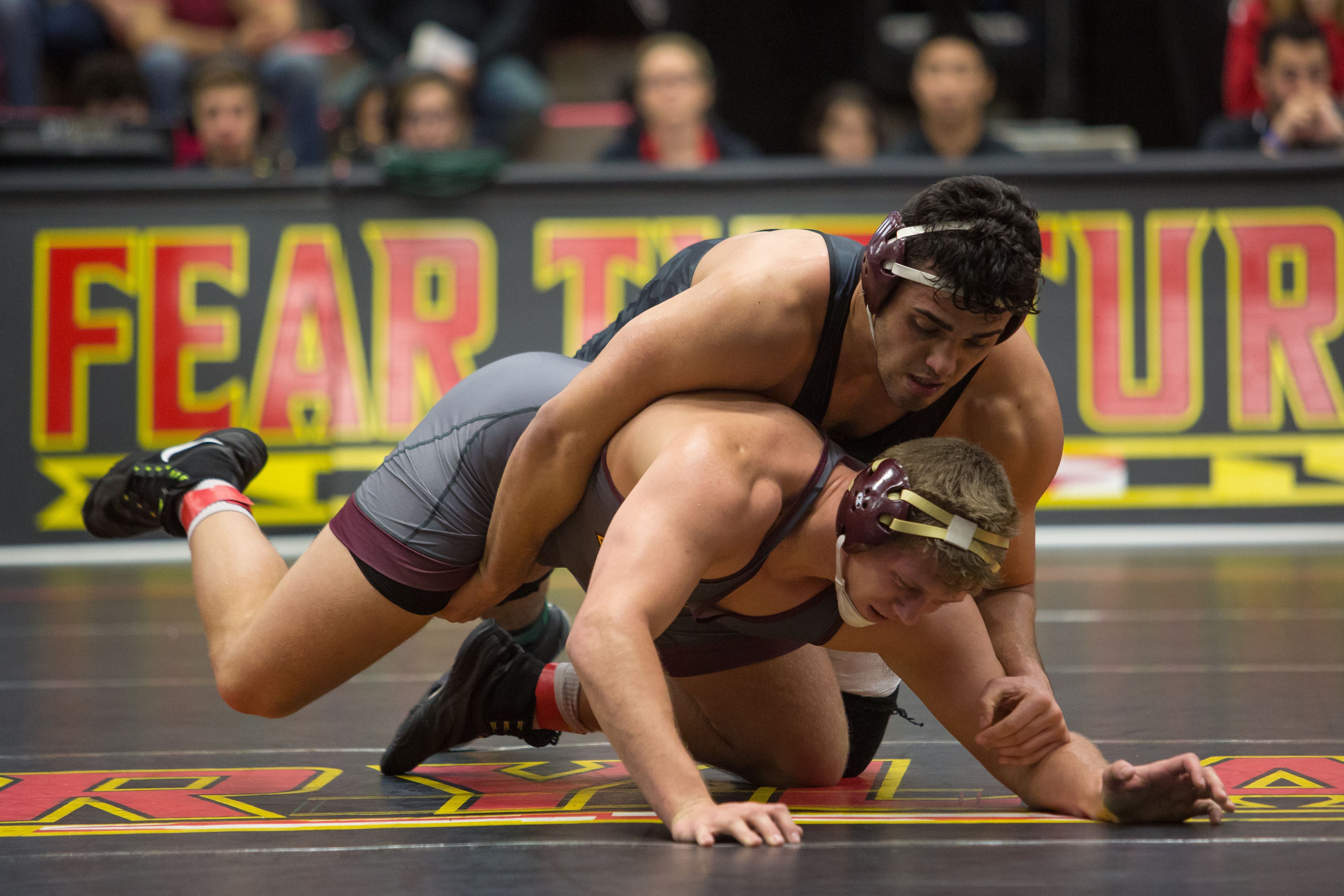 285-pound Youssif Hemida takes down his opponent in Maryland’s 26-22 loss against Minnesota on Feb. 11, 2018 at Xfinity Center. (Marquise McKine/The Diamondback)

With All-American status and a spot on the podium just one win away, Maryland heavyweight Youssif Hemida entered the blood round of the NCAA championships with his season and college career on the line.

The only thing standing in the way of Hemida’s dreams was one of his biggest rivals of his collegiate career: Iowa’s Sam Stoll.

In the fifth meeting between the fierce competitors, Hemida used three takedowns to end the duo’s final bout in dominating fashion. And when the final buzzer sounded, a 7-3 win meant that Hemida became the Terps first two-time All-American since 2014.

Hemida’s first two matches on the day were convincing pinfall victories over No. 25-seeded Gannon Gremmel of Iowa State and No. 15-seeded Tate Orndorff of Utah Valley.

Hemida started the match fast by notching a takedown in the opening minute, and the Terp never relented. After accumulating a 5-0 lead in the second period, Hemida was finally able to turn the Cyclone onto his back and get the pin.

That dominant performance set up the first ever bout between Hemida and Orndorff for a spot in the round of 12.

After a scoreless first, Hemida opened up the scoring in the second with a quick one-point escape. The two continued to battle but with time running out, Hemida locked onto Orndorff and took him down to take a 3-0 into the third period.

In the final frame, Hemida rode Orndorff hard and was able to get the Wolverine flat on his back.

Hemida’s big wins set up the final match in he and Stoll’s rivalry that dates back to 2016. Coming into Friday, Stoll had the advantage in the series with three victories to Hemida’s one. But Hemida had earned the biggest win of them all, which came at last year’s NCAA tournament.

After Hemida won that match 7-2, he celebrated his victory, much to the chagrin of Stoll. A shove by the Hawkeye during the ceremonial handshake caused the two to exchange words before they finally left the mat.

The Hawkeye exacted his revenge in a 1-0 decision over Hemida in Iowa City on Feb. 8 — but this time, it was Hemida who got revenge.

Hemida used early offense to gain an early 2-0 lead, but Stoll managed to wiggle out and cut the lead to 2-1. A one-point escape to start the second pushed Hemida’s lead to 3-1 heading into the third and final frame.

There, Stoll got another escape to trim the deficit to 3-2. But Hemida remained poised.

The Maryland standout once again got a hold of Stoll’s leg and executed a near identical takedown to his one in the first. After another Stoll escape to make it 5-3, Hemida put the match on ice as another takedown gave him the 7-3 win and cement his All-American status for the second straight year.

To close out his night, Hemida took on Central Michigan’s Matt Stencel. For the fourth straight match, Hemida opened the scoring and took an early 2-0 lead.

An early escape in the second period gave Hemida a 3-1 lead, and that score held until the third period. Stencel tried with all his might to get Hemida down but the Terp instead took Stencel down and cruised to a 6-2 win.

Hemida’s dominant day two performance guaranteed him a top-six finish and the Maryland star will take on Minnesota’s Gable Steveson, who he lost to by a 7-4 decision earlier in the year, for a chance to go to the third place match.