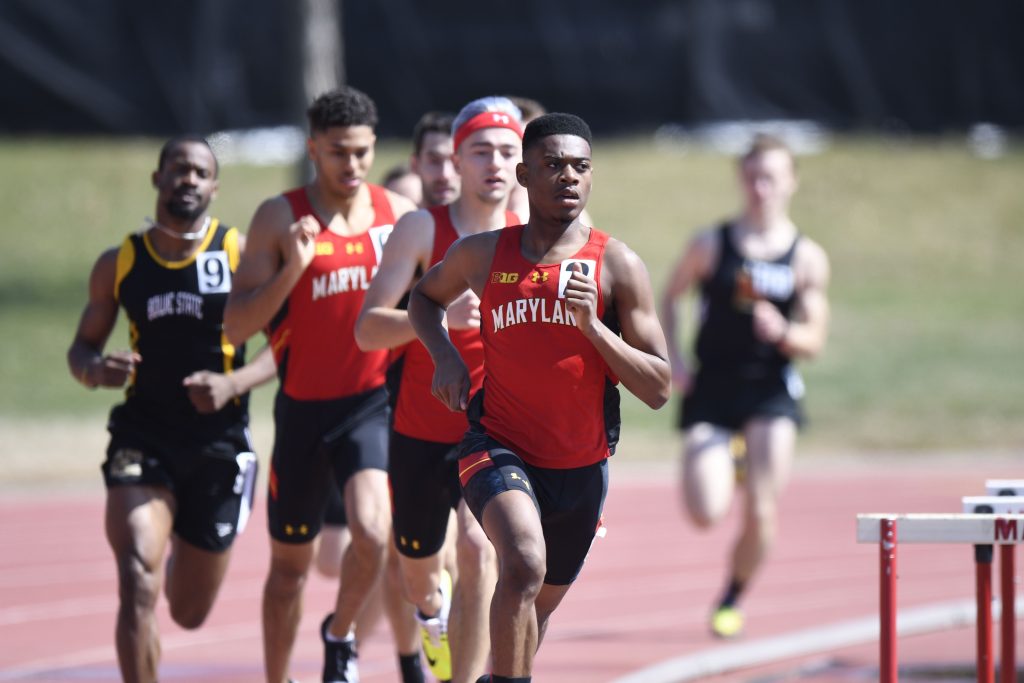 When Kameron Jones was 9 years old, a family friend saw him sprint across a baseball field, and told his mother he might want to consider running track.

He hasn’t stopped running since.

At Maryland, Jones has taken the speed he once displayed on the diamond to the track, finding success with the Terps at the highest level. The junior has three school records, and on Feb. 24 he competed against professionals at the Toyota USA Indoor Track and Field Championships, placing third and breaking the school’s 600-meter record — one that he already held — in the process.

The chance to line up against professional runners offered Jones a glimpse into what could become his career — running at a level he didn’t think was possible when he first arrived in College Park.

“It definitely gave me a lot of confidence. I went in just happy to be there and hoping to do my best,” Jones said. “Actually succeeding against people who I have watched on TV before has given me confidence.”

At the Bishop’s School in San Diego, Jones was a five-time Coastal League Champion. As he racked up personal best after personal best, colleges around the country took notice, from Portland State to Alabama State.

But Jones’ attention was drawn to Maryland. One of the primary reasons for that was coach Andrew Valmon, who has led the Terps since 2003 and made waves in his own sprinting career. Valmon won gold in the 1988 and 1992 4×400-meter relay for the U.S. Olympic Team and served as head coach of Team USA Track & Field during the 2012 Olympic Games in London.

“That’s what brought me here,” Jones said. “Having someone that’s been there and done that and everything possible in the sport, he’s been really instrumental in my development.”

Since arriving at Maryland, Jones has broken school records in the 300-meter and 600-meter sprints, including one as a member of the 4×400-meter relay.

At February’s Toyota USA Indoor Track and Field Championships in New York, Jones’ 600-meter time of 1:15:32 ranks 11th in the world. Jones shaved over one second off his previous best as he competed alongside Donavan Brazier, whose 1:13.77 set a new world record in the event.

“Three school records, following up from what he did last year,” said Valmon. “He could have just laid to the side, but stepped up his game and said this is where the program needs to be and got us a lot of exposure.”

While individual names go in the record books, there is a heavy team dynamic in track and field, especially during training. Jones credits his teammates and Valmon for continually pushing him during practice, preparing him to compete at other events.

“We like to push the pace, we like to go after it,” Jones said. “I’m getting pushed and I am pushing them, and as a collective, as a team, we are getting better.”

As Jones improves, there are discussions of following his coach’s footsteps toward the Summer Olympics, next to be played in 2020. His potential was on full display when he placed third at the USA Indoor Track and Field Championships.

“I am more proud of how he handled himself,” Valmon said. “We wouldn’t want to put the cart before the horse because he is in such a good place. My personal opinion, he should definitely have that on his radar.”

While Jones has plenty of time to decide on his future — the 2020 U.S. Olympic Trials aren’t until June of that year — his performance in New York was all the motivation he needed to start focusing his efforts on reaching the biggest stage in sports.

“Honestly, going into college, [the Olympics] wasn’t in my frame of mind,” Jones said. “After this weekend, it’s something I am looking towards and definitely something I would like to accomplish.”